Some say trap, neuter and return is the solution for taming the city's growing feral cat population. Others aren't so sure. 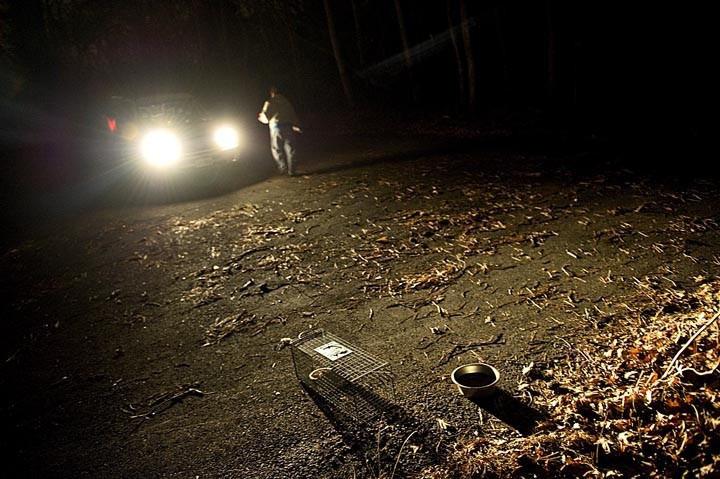 Jennifer Erisman's Toyota hatchback is parked near a wooded area next to a South Side supermarket she's asked Style Weekly to keep a secret. Inside a $60 metal cage, which she's placed a few feet from the car bumper, is a dish of pungent, chopped mackerel. It's 8 o'clock on a foggy Tuesday night — feral cat trapping hours.

The cat that gingerly steps out from the dark of the woods, however, doesn't appear to be a wild animal. It's a slim female, with a smooth gray coat accented by ringlets of black on its tail.

"That's the one," Erisman says, as the cat stalks around the cage before retreating into the dark. Minutes pass while Erisman, a clinical social worker by day, peers over the steering wheel. A second cat appears, silently investigating the trap.

"I've been trying to get him for forever," Erisman says, identifying the plump interloper as one of two felines that, after two years of managing this estimated colony of six, continues to evade her. The last cats in the colony that need treatment are the always the most difficult to catch, she says.

There's reason to be anxious: Female cats can have up to three litters of kittens a year. She says male cats will travel miles to impregnate a female — and mating season is right around the corner.

Since 2001 Erisman has spent hundreds of hours of her spare time in Richmond's urban and suburban wilds feeding, caring for and stalking feral or otherwise homeless cats. The ones that end up in her cage — basic equipment for trappers — get a date with a veterinarian for sterilization.

The goal is to reduce the area's feral cat population by trapping as many as possible, getting them spayed and returning them to the colony to live the remainder of their lives being fed daily by cat advocates such as her.

This approach — known as Trap, Neuter, Return, or TNR — is widely considered by animal welfare advocates as the most effective method of controlling a feral cat population. The idea's apparently gained some traction at City Hall.

Last year Richmond City Council passed an ordinance to create a memo of understanding between the city and the Richmond chapter of the Society for the Prevention of Cruelty to Animals, which embraces the strategy as a humane alternative to euthanasia. According to the ordinance, the document would require both parties to work toward ending the killing of healthy dogs and cats.

In January, a handful of the SPCA's volunteer trappers, working at the request of the Richmond Redevelopment and Housing Authority, worked a colony of 35 feral cats that had taken up residence in the crawl spaces beneath the box-shaped apartments in Gilpin Court.

But critics say that returning the animals to the outdoors leaves them exposed to the environment, including actual wild animals such as raccoons that may carry harmful diseases. They argue that this may contribute to the spread of rabies, thereby threatening both humans and native wildlife.

But the alternative is considerably less humane, says Sandy Green, a local veterinarian and board president of Operation Catnip, a volunteer group of trappers. According to the most recent annual report, 528 of the 1,632 cats taken in by the city's animal control shelter in 2009 ultimately were euthanized.

That's way too many, Green says. The problem starts with cat owners not getting their cats spayed and neutered, she says. Some of those cats will stray. Others will be abandoned. Estimates of how many feral cats live in the metro area are hard to come by. Better that those cats end up in colonies where they can be cared for, Green says: "Euthanasia is not in my opinion an ethical solution."

But support for neutering and spaying, then returning feral cats to the wild as a solution to pet overpopulation is far from universal. The American Bird Conservancy, long an outspoken opponent of the strategy, says that cats left to their own devices outdoors become predators regardless of whether they're well fed by people such as Erisman. The conservancy, along with other foes of trapping and returning, cites a 2010 University of Nebraska study that found cats left to their own devices outdoors kill an estimated 480 million birds per year.

But with shelter space limited, there might be few other viable alternatives. Tamsen Kingry, chief operating officer for the Richmond SPCA, says that it's the "return" component that most critics take issue with. But even if cats are removed from a colony, Kingry says, "There's nothing to stop others from moving in." Advocates call it the "vacuum effect," a phenomenon in which new cats will move in to replace removed cats where water and food sources remain available.

So in the absence of a more perfect solution, Green and Kingry say they'll continue to support trapping and returning. Through a network of volunteer veterinarians, Operation Catnip spays some 80 cats each month. "We're just trying to keep the numbers down," Green says. S