“Breaking Bad” creator talks about his new spinoff, Richmond dining and what local spots might show up on “Better Call Saul.” 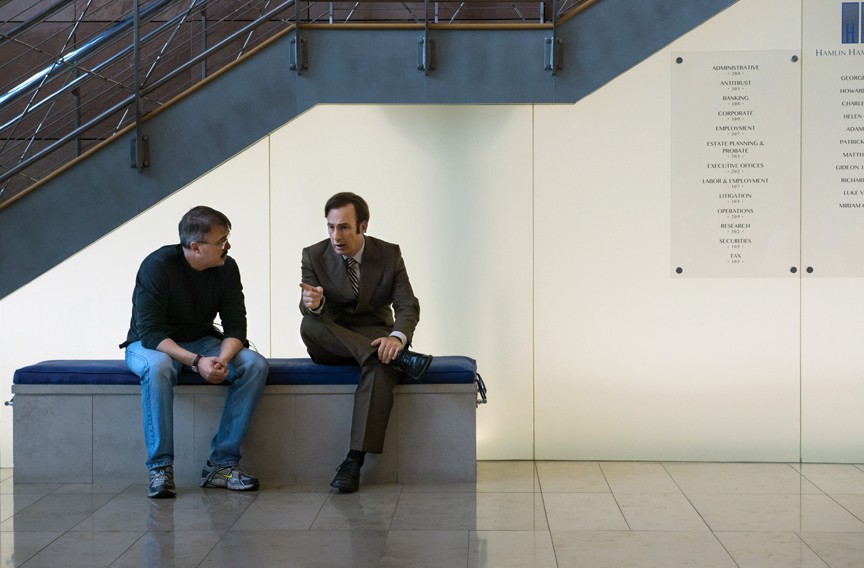 Since Style Weekly first interviewed “Breaking Bad” creator Vince Gilligan in 2010, much has changed. Foremost is that Gilligan now is one of the most famous television writers in the world -- a writer who gets recognized on the street.

Raised in Farmville and Chesterfield County, Gilligan wrapped the blockbuster “Breaking Bad” series in 2013, found time to appear on “The Colbert Report,” and has been hard at work creating “Better Call Saul” -- a spinoff about quick-talking lawyer Saul Goodman, played by comedian Bob Odenkirk. The new series, which premiers this Sunday, Feb. 8, picks up six years before the start of “Breaking Bad,” when Saul is still known by his birth name, Jimmy McGill.

Style: Hello, Vince. How are you doing?

Gilligan: Things are good. I’m stressed out these days. That’s been a constant state of being for the last five or six years. I’m getting used to it. … We had one Sunday off between post-production for season one [of “Better Call Saul”] and the writers’ room for season two, so I am definitely not letting the grass grow under my feet.

I heard you were in Richmond for the holidays.

That was great. It was wonderful to visit my mom and dad [in Chesterfield] and my Uncle Gary who lives out in Goochland. … My girlfriend, Holly, and I were there, and we were remarking on how wonderful the restaurants were in Richmond now. Richmond has become a real foodie destination -- just excellent, excellent restaurants and great bars. Heritage -- that was a particularly good meal. I think they had foie gras that night. Up until very recently that was illegal in California, so anytime I can get foie gras I’m very happy, and I had an excellent foie gras appetizer there. Had a great meal at the Blue Goat, which used to be the Peking on Grove next to the Westhampton [Cinema]. I really miss the Peking, but the Blue Goat is a very worthy successor in that restaurant space. We had an excellent meal there, a really good shrimp and grits. I was so sorry to hear that the Westhampton was going to close. That is such a bummer.

So why did you decide to continue the story of Saul Goodman?

Saul Goodman speaks so colorfully and he has such great turns of phrase -- and believe me, they take forever to come up with. They flow so smoothly off his tongue, he’s such a silver-tongued devil and so effortlessly funny. That stuff is fun to invent. We all have those moments in our lives where somebody says something and we think of a perfect retort a day later. Saul Goodman is the type of guy that can always come up with it instantly. There’s no lag time there.

One of the elements that made “Breaking Bad” so daring was that audiences could watch Walter White’s evolution through the course of the show. With “Better Call Saul” you’re using one of television’s classic plays, the spinoff. Will this be a more traditional show?

We embarked on this spinoff for very selfish reasons. We loved Bob Odenkirk and we loved putting words in the mouth of Saul Goodman. This is an evolution story as well. … The interesting thing about Jimmy McGill is when we first meet him in “Better Call Saul” he’s a likeable guy, he’s a bit of a rascal … but he’s surprisingly selfless and heroic at times. At first, at least, he will not be who people expect when they think of Saul Goodman.

Everyone’s favorite curmudgeon, Mike Ehrmanraut, is in the trailer for the new show. Can we expect to see other “Breaking Bad” characters in the series?

I think we might see, in short order, folks from the “Breaking Bad” universe [but] we don’t want to engage in stunt casting. [Co-creator Peter Gould] and I feel like we need to be self-disciplined, and to that end we’ve been very honest about the fact that no one should expect to see Walt or Jesse in the first 10 episodes of “Better Call Saul.” They will not be making an appearance in the first season.

One blogger summed up the difference between “Breaking Bad” and “Better Call Saul” essentially as “more humor, less breakfast food.” What do you make of that?

There’s definitely more humor. It’s a very different show and of course folks are going to look at it through the lens of “Breaking Bad.” … As the show progresses, I think people are going to be surprised at how much drama there is as well.

On “Breaking Bad” you snuck in occasional references to Virginia. Can we look forward to any in “Better Call Saul”?

My girlfriend, Holly, and I have gone to a great many restaurants over the last two decades in Richmond, and there was one we missed a lot: Davis and Main [now Continental Divide]. So there is a reference at the end of the season. … That was a fun one to put in. It’s not necessarily referenced as a restaurant, but it’s there nonetheless.