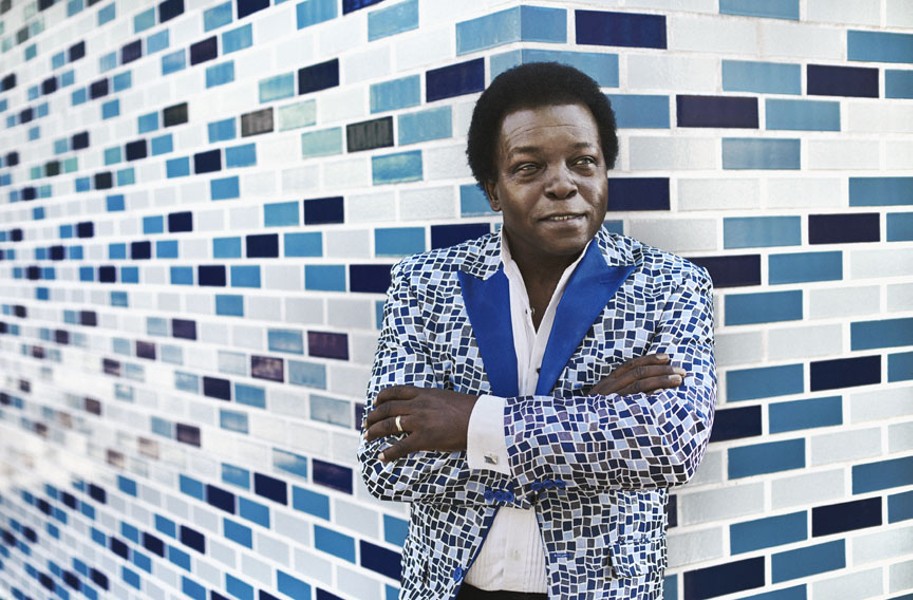 Soul singer Lee Fields will be preaching more love from the Brown’s Island stage for the first Friday Cheers on May 5. “If they can build a city like Las Vegas out in the desert, shouldn’t be no problem solving people,” he tells Style.

Like his friends and contemporaries, Charles Bradley and the late, great Sharon Jones, Lee Fields is all about the love.

For more than 45 years, the Wilson, North Carolina, native has been singing songs of the heart with gritty, emotionally powerful vocals — hoping to provide a little relief.

“I really think we’re in very perilous of times,” he says by phone on his way to a gig at Coachella in Southern California. “And I’m not putting the blame on anyone. It was meant to be this way, I believe. We have to stay united as a people. I’m not a political guy, but I do know in this world today there should be more love. I’m promoting love. Love of God first, then love of mankind.”

Early in his career, Fields earned the nickname “Little J.B.” because he sounded so much like the Godfather of Soul, James Brown. (Later he even recorded extra vocals for the Brown biographical film, “Get on Up.”) Fields left home for New York at 17 with no money. His first release, in 1969, featured a cover of Brown’s “Bewildered.” The record executives encouraged him to do it, he says.

But the singer eventually realized he needed to find his own voice.

“It took awhile because of my great admiration for James. But the world can’t have two Jameses,” he says. “From the moment I met him, that set me on my journey to find out who I am.”

Over the years, Fields has been featured in a number of prominent bands, including — for about six months — Kool and the Gang, just before its career took off. “They didn’t need my energy,” he says. “They were already a force.” Fields kept on releasing hard funk and soul tunes, even though the ‘80s were a particularly dry period, before the resurgence of authentic soul labels like Desco and Daptone.

Fields says that growing up in the South was a good thing for him, especially during the 1960s. “I think that was the peak of society awareness,” he says. “Nothing up to now has superseded it. It gave people extreme hope … but he that forgets is destined to repeat.”

He adds that he doesn’t see parallels between the civil rights movements of today and those of the 1960s.

“The difference today is that it seems like every gathering is always followed by some violent outcome,” he says. “That gives good cause for the powers that be to continue to suppress movements. I think if you’re gonna do anything, do it orderly.”

On “Special Night,” his new album with his band the Expressions, the song “Make the World” was inspired by a dream the singer had where he traveled to the future.

“It was total chaos, lack of feelings for each other. It was turmoil, man — people fighting,” he says, and adds that nature was completely ruined. “I woke up with a light sweat. Then I went back to sleep and was taken on the same road, to the same place, and I saw green trees, pure waters, harmony among people. It was a beautiful place.”

Fields’ friend, Daptone singer Charles Bradley, was recently diagnosed with stomach cancer and is recovering from surgery. “Doctors got the cancer out, now he’s ready to get back on the road . . . He feels [the love],” he says. Fields doesn’t think the music that artists such as he and Bradley make should be considered nostalgic.

“It’s music by human beings. A lot of music played today isn’t human beings, it’s algorithms,” he explains. “[In the future] the adversary is not gonna be man against man. It’s artificial intelligence against human beings. Right now, it looks like they’re starting to win.”

In the future, Fields would like to record a country-and-western song and a reggae song. “Most people think you got to be from the islands to sing reggae, but one of the biggest songs ever was made by Johnny Nash out of Texas [‘I Can See Clearly Now’].”

Known for decades of touring the so-called Chitlin’ Circuit around the South, Fields recalls that he used to play at the legendary Sahara Club in Richmond on North Avenue south of Brookland Park Boulevard. But he hasn’t played here in quite some time, he says.

At every concert, Fields goes out there and says a prayer that he can take things higher. “Every night, we try to go to a place of total joy,” he says. “We can’t achieve that every night. But we’re shooting for joy, man.” S

Lee Fields & the Expressions perform at the first Friday Cheers of the season at Brown’s Island on Friday, May 5. Local funk group Kings opens at 6:30 p.m. Tickets are $5.