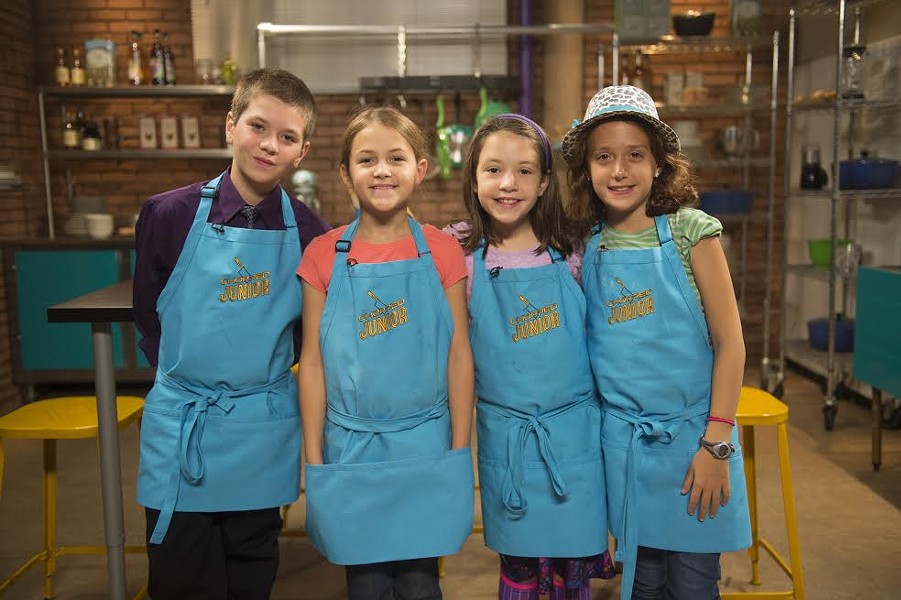 UPDATE: And the winner is ... Claire Hollingsworth! She won $10,000 on "Chopped Junior's" episode "Cuteness Overload." You can catch her again when the show airs on Saturday, Jan. 9, at 4 p.m. on the Food Network.

The channel’s kid-sized version of Ted Allen’s “Chopped,” also hosted by Allen, presents competitors aged 9-15 with a basket of mystery ingredients that must be transformed into chef-worthy dishes in just 20 minutes. The show’s casting director discovered the pair through Edible Education, a child-centered cooking school in Midlothian founded by Ann Butler. Both girls attended summer camps and after-school classes there.

“Kids are more willing to try something crazy, and often crazy is exactly what you need to succeed … on a competition like ‘Chopped,’” Allen says on the show’s website. We decided to see what Hollingsworth and Waters thoughts were about the experience.

Style: When you heard about the audition, what did you guys think -- what was your first thought?

Emily Waters: I was really excited about it, but I didn’t really think I would make it that far.

Claire Hollingsworth: I was really excited about it like Emily, but I was just really nervous. I was only nine at the time and I didn’t even know if I would make it to the audition -- I’d had experience before with “Rachel Ray’s [Kids Cook-Off],” and I didn’t make it [on that show].

What did you have to do for the audition?

Emily: I had to do some videos and a Skype interview, and you had to cook something and take pictures of it.

Claire: I did basically the same thing. In the video, I did my best to make it funny.

Claire: When I found out I made it on the show I was so excited. I practiced because the thing about “Chopped” is that it’s different from “Rachel Ray.” It’s the hardest challenge out there because it’s timed, one. Two -- it’s a mystery ingredient and three, you don’t get recipes. If you don’t know how to make some basic recipes -- most people know how to -- that would be a big problem.

How do you practice ahead of time for this show?

Claire: When I practiced the entree, I had to think protein, starch, vegetable, garnish, sauce and seasoning. A lot of people get cut because their dish isn’t full or it’s not seasoned. It’s a song that I have in my head -- it’s very catchy and my mom helped me come up with it.

Emily: My parents gave me some ingredients and stuff. I had to make it and we set our oven timer for 20 minutes. And sometimes I went up against my mom or dad. I practiced different things that I might have to do that I don’t usually do.

Claire: My mom turned our kitchen into a “Chopped” kitchen. Like the pantry -- our dining room did not exist anymore. It was covered in food. I tried it in my real pantry but I had trouble because I couldn’t see anything. For the fridge -- it was crazy. I’d never seen it like that before because it was clean and basically empty.

Once you were on the show, what was the scariest part for you guys?

Emily: For me, it was probably leading up to it. I was really nervous before we got there -- but once I got there I was fine.

Claire: The thing that was most nerve-racking for me was when Ted was about to lift the metal tin. [Allen lifts a serving lid placed over a contestant’s dish to reveal who has been eliminated from the competition.] He put his hand on there, and then he let go. He put his hand on there and let go! And finally, when he actually pulled it up, none of us were expecting it. My dad was in the camera room and said, “Just open the dang thingy!”

And what was the best part?

Emily: Just getting to be there -- the awesome experience that it was. And the cooking -- all of us who were there loved to cook. That was very fun.

Claire: I made a new friend there -- I made my new friend, Emily. I was really happy that she lived in Virginia too [Claire lives in Moseley and Emily lives in Glen Allen] and that we could see each other again.

You can meet Claire Hollingsworth and Emily Waters at the Steward School at 6 p.m. the night the episode premiers. The two will judge a cooking challenge and then watch the show with the audience and participants. Attendees are encouraged to bring canned goods for the Central Virginia Food Bank and the girls will present a donation to Doug Pick, chief executive officer of FeedMore. You can register for the event here.