Interview: The Zombies’ Colin Blunstone on the 50th Anniversary of “Odessey and Oracle” 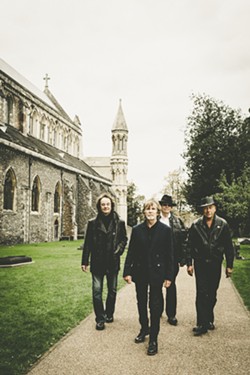 Few albums in rock history have led the charmed life of “Odessey and Oracle,” the baroque pop pinnacle of English group, the Zombies.

The album, filled with lovely melodies, high-soaring lead vocals and gorgeous harmony singing, was recorded in the summer of 1967 at Abbey Road Studios, using the mellotron of John Lennon, who’d just left the studio with the Beatles after recording “Sgt. Pepper’s Lonely Hearts Club Band.”

The Zombies' effort was released in the spring of 1968 with its title misspelled by cover artist Terry Quirk. The album failed to produce an immediate hit and was considered a commercial disappointment, which didn't matter much since the band already had basically broken up.

But then a strange thing happened. "Odessey" began its first reincarnation after its discovery by musician and CBS producer, Al Kooper, who pushed for its 1969 release in the United States. Here it spawned the band’s catchy signature hit, “Time of the Season,” which remains a staple of classic rock radio around the world as well as film and television depictions of the 1960s.

The work’s reputation has only grown through the decades since, ranking No. 100 on Rolling Stone’s top 500 greatest albums of all time and being praised by the likes of Brian Wilson, Elliott Smith, Tom Petty and countless others.

After several acclaimed reunion tours, the Zombies are now touring behind their masterpiece’s 50th anniversary, as well as a new studio album, “Still Got That Hunger.” They will be performing the first half of their upcoming show in Virginia Beach with the new incarnation of the group, while the second half will feature “Odessey” performed note-for-note with four original members: keyboardist Rod Argent, lead singer Colin Blunstone, bassist Chris White and drummer Hugh Grundy.

Style spoke with Blunstone, 71, about the album and its strange journey to wider acceptance and repeated discovery by new generations.

Style: This always felt to me like the quintessential summer album. If you’ll pardon the pun, did the time of the season have anything to do with its feel?

Blunston: [Laughs] I absolutely agree, it does have a summer feeling about it. Maybe we took in some of the summer atmosphere when we were writing and recording. We’ll have to try one in the winter and get some edge in there.

On a personal level, I much prefer to record in the summer -- partly because as I’ve gotten older, I’ve gotten prone to catching colds. It’s made me apprehensive to go out and meet people, because we sing all these songs in the original key, and most are quite high, even for a 20-year-old. So if I get a cold, it can get challenging. So I quite like recording and touring in summer.

How does it feel now that this is the last tour for the album?

You can never really tell can you? But we have no intention of touring again with this album. So I would say it is the last time. But we said that when we celebrated the 40th anniversary [laughs]. … There is a demand. And it’s hard to deny that demand.

Why do you think critics and audiences were so late to this work?

First and foremost, I don’t understand what happened with this album. It’s one of life’s great mysteries. It did get a few good reviews in the UK. But as a commercial entity it was very unsuccessful and it took about 10 years. No one was promoting it. There was no marketing plan. I sometimes think this album has a life of its own. It’s fought through on its own to get the attention of fellow performers and the media. In the UK, Paul Weller [The Jam] has talked about this as a favorite album for many years -- he’s huge in the UK. And Tom Petty has done the same here. We’re incredibly grateful to all the artists who’ve name-checked it. To a large extent I don’t understand it. It came out, it didn’t sell, then 10 years later it started to sell. To this day, it’s selling more year on year.

It does sound like the label was negligent. I get “Care of Cell 44” and “Time of the Season” as obvious singles at the time, but why not “This Will Be Our Year”?

Well, I agree with your choices. I thought “Care of Cell 44” was the obvious commercial track. But thinking back to 1967, it’s easy for me to say I always knew “Time of Season” would be a hit, but I didn’t. I thought “Care of Cell 44” was the most commercial track on there. And I’ve grown to really love “This Will be Our Year.” I think Rod [Argent] and Chris White were just working in an incredibly rich vein. They’ve written beautiful songs for me as well on my first solo album. … Of course, CBS didn’t really want to release the album at all. It was all down to Al Kooper from Blood Sweat and Tears, who had become a producer at CBS, and he pressured Clive Davis to release the album. So we owe a lot to him.

Regarding the recording itself, how were you able to get into Abbey Road as a non-EMI artist and with no big-name producers?

In effect, Rod Argent and Chris White produced the album. But the answer to that question is that it’s a mystery. I don’t know. There was a feeling in the music industry that non-EMI artists could not use Abbey Road. At that time, it was possibly the best studio in the world. We were really fortunate to get in there and work with wonderful engineers like Peter Vince and Geoff Emerick who had just been working on “Sgt. Pepper’s” a few weeks before. And we benefited from all the innovations that the Beatles had introduced to UK recording studios. In effect we were recording not quite on 8-track, but seven. There were many other subtle innovations. … I don’t remember seeing other artists in there. The Beatles had just left. We were the next band in. (I did say hello to them in the ’60s backstage at a concert.) But we weren’t influenced by their album because it wasn’t released until after we recorded. We might have been influenced by “Pet Sounds,” that might have been subconscious. The Beach Boys were certainly one of our favorite bands.

Can you talk about how you worked out the harmonies?

Even as an amateur band, we always did harmonies right from the beginning. Part of the reason was Rod was a chorister in St. Albans Cathedral. He understands it really well. We established a unique way of arranging them. As lead singer I would sing the melody, but if we went into a block harmony, they would let me establish what I felt was the melody. Because I have a high voice, and I was naïve as a teenager, I would often slip into the top harmony. So we would establish what was natural to me. Then Rod would set a simple harmony for Chris White, since he had to play bass. And Rod would fill in all the other parts. We were able to do this because Rod had such good knowledge of harmony. We just played to everyone’s strengths.

Do you prefer the mono or stereo version?

I think I prefer the mono version because I know the stereo version was underfunded and rushed. It’s no one’s fault, it just came down to time and budget. But [the stereo version] could’ve been more successful.

So where do you guys go from here?

It’s very important to Rod and I that we keep writing and recording new material. We’re more than happy to play the hits as well as obscure tracks from the Zombies. It’s quite a bizarre situation when you have to sit down and re-learn these tracks. And it can be quite interesting and exciting to work out these things you did in your 20s.

But it’s a real thrill to play the new stuff because usually it gets as good a reaction from the audience as the more established catalogue does.

So hopefully we’re doing something right.

The Zombies perform “Odessey and Oracle” on March 21 at 7 p.m. at the Sandler Center for the Performing Arts in Virginia Beach. sandlercenter.org.