Editor’s Note: The show at the Broadberry has been cancelled because of Dunsworth’s death this week. 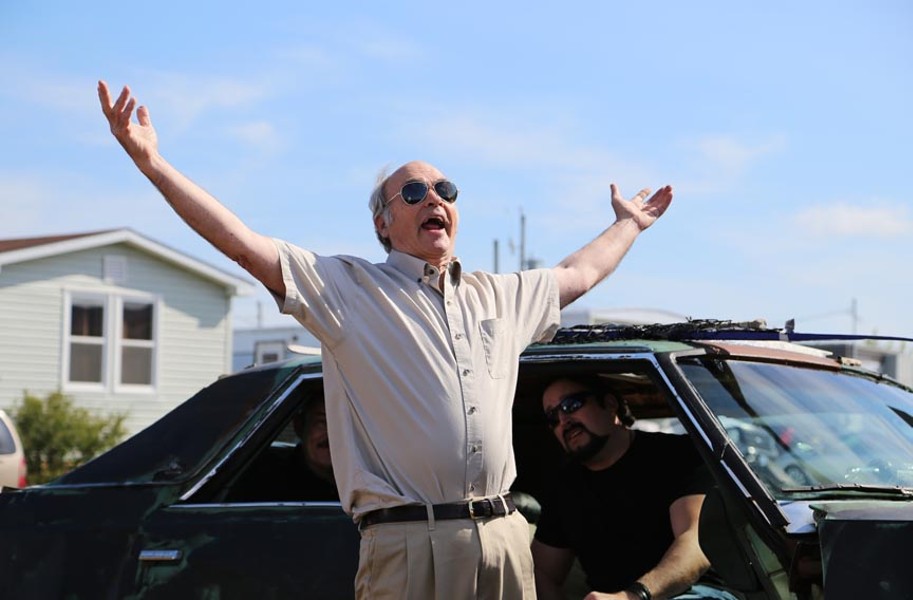 Actor John Dunsworth has been fighting Canadian censors for years.

Editor’s Note: After we went to press, we received word that John Dunsworth had died on Oct. 16 after a brief illness. His upcoming show at the Broadberry has been cancelled. Our condolences go out to his family, friends and fans.

In a world where free speech has taken on a complicated new meaning, comedians like John Dunsworth are trying their best to make their work meaningful, albeit in a controversial way.

Dunsworth, 71, is best known for his role as Jim Lahey, a bisexual, drunk, trailer-park supervisor on the hit Canadian TV show, “Trailer Park Boys,” now in its 12th season and available on Netflix. Also he’s spent decades acting in more serious roles on stage and screen. But when he comes to the Broadberry in Richmond with the “Never Cry Shitwolf” live stage show, he’ll be bringing his arsenal of shit jokes along with his overweight, bisexual lover, Randy (Patrick Roach), who undoubtedly will spend some time hooking for cheeseburgers.

For the uninitiated, “Trailer Park Boys” is a Canadian mockumentary-style half hour show that follows the adventures of three residents at Sunnyvale Trailer Park: the drug dealing Ricky (Robb Wells), the brains of the operation, Julian (John Paul Tremblay) and the four-eyed cat-lover, Bubbles (Mike Smith). Dunsworth, as Lahey, is almost always drunk, a former police officer doomed to try and fail to foil every one of the gang’s plots. Whether it’s starting an illegal strip club in their trailer, or paving their driveway with hash, the gang’s trouble only gets worse with Lahey involved.

But it’s also a show about a group of friends who, in the end, love each other no matter the obstacles they face. Dunsworth sees it slightly differently.

“It’s a story of losers, but they are hero losers,” he says. “They epitomize the weakness in humans. And it’s so successful ’cause people are watching, reveling in the fact that everyone in the show is stupider than they are.”

That might be true, but it’s also the memorable cast of characters who make the show shine. Dunsworth and Randy will be sifting through shit jokes and trying to find a kernel of good in what promises to be a bizarre but hilarious show.

“I get accused of being too much of a Pollyanna,” says Dunsworth about his love for highlighting the good in the often horrible. “I tell people that the shit winds are blowing in a counterclockwise direction and you’ve got to turn your back to it and take advantage.”

A core message for the touring show is the importance of imagination. Dunsworth says it’s on display every night. “We have the Church of the Bottle,” he says, recalling one of his favorite bits from the live show. “I get [the audience] to repeat the mantra, we call them the liquor-ments, instead of the commandments:

Dunsworth and Roach have had the show on tour for more than a decade, and while most of the TV show is written by its creator, Mike Clattenburg and a team of writers, “Never Cry Shitwolf” is a production the tour-mates have developed since their first year on the road. He says they love touring, specifically because of the topography of the United States. “It’s so beautiful,” he says, mentioning the rolling fields of grain as he spoke to me driving through North Dakota. “In Canada, maybe it’s the weather, but everything is a little smaller.”

In some cases, certain minds can be smaller up North, too. The degenerate tone of the show has come under fire by Canadian TV censors, and Dunsworth has often stepped up to defend the show’s right to free speech. In 2015, he advocated against legislation that would have impacted what kind of foul language can be used on Canadian TV. The law was overturned by the country’s supreme court.

While Dunsworth still stands up for free speech, he isn’t blind to the impacts on political discourse in today’s social media climate. He says putting the burden on companies like Facebook or Twitter won’t solve the problem. Rather, people need to look at themselves and how well they inform each other first.

“That’s what free speech does for you,” he says pointing to so-called fake news. “What you have to have is an educated population.”

No matter your stance on public discourse, Dunsworth promises the show will feature a variety of creative skits, songs and chances for audience participation. And if all goes to plan, and the audience is as involved as he hopes they are, expect some surprises as well.

“It titillates some more than others at different points,” he says, laughing. “When we have the live sacrifice on stage, some people get off on that.” S