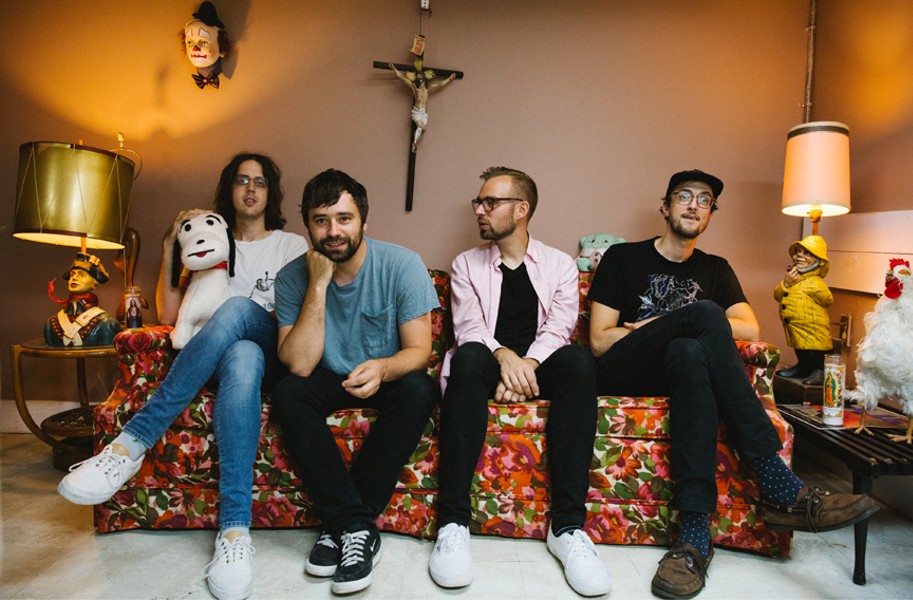 Sales of electric guitars are plummeting, and hip-hop and country rule the airwaves. But if the notion of the popular rock band is fast becoming a thing of the past, the members of Cleveland's Cloud Nothings have yet to receive the memo.

Beginning in 2009 as a solo vehicle for songwriter Dylan Baldi, Cloud Nothings has since grown to become one of the most respected young bands in indie rock. The group's latest album, "Last Building Burning," returns to the lean, loud and live sound of the band's breakthrough album "Attack on Memory," mostly dispensing with the punk-pop melodicism of 2016's "Life Without Sound." Style spoke with Baldi in advance of the band's return to Richmond to play Strange Matter on Dec. 9.

Style Weekly: Your previous album, "Life Without Sound," was a relatively hopeful sounding record. "Last Building Burning" returns to the more intense, live sound of [2011's] "Attack on Memory" and [2014's] "Here and Nowhere Else." Was this intentional?

Dylan Baldi: Yeah, each record is pretty intentional in terms of the approach and vibe. It'd be hard to accidentally make an entire record sound a certain way. I wanted this one to be kind of exhausting and draining to listen to all the way through.

I read that you were inspired by bands like Bell Witch and Boris. Did that influence the decision to work with Randall Dunn, who is known for his work with heavier sounds?

Yeah, I just thought Randall would intuitively understand what we were going for. He works with some pretty heady musicians who probably have a more methodical way of working than us, but I had a feeling he'd be down to just record a pretty live-sounding and simple group of songs. I really like how it turned out.

I would think a band like Cloud Nothings — at least in its current incarnation — depends on a more traditional studio environment to produce the sort of music it does. Do you think that, given the wide availability of home recording technology, studio recording has become an antiquated model?

I think the antiquated thing isn't necessarily studios themselves, but the spending long amounts of time in them. There are very few people who have the money to make that kind of thing happen, so the lower entry cost of home recording has opened up the field to anyone who can scrounge up a couple hundred bucks. I think more things are gained rather than lost thanks to that. I think it's nice that anyone with an idea now has a very easy way to get their music out there.

At nearly 11 minutes, "Dissolution" is your longest recorded song to date and a centerpiece of the record. What does a long-form jam communicate that a short pop song cannot?

It's good to stretch out and take a little trip. It adds a movielike element to the music, when it starts one place and goes on a journey to a different place at the end, with little peaks and valleys here and there. It's a good music muscle to stretch and keep active, and even helps inform the poppier songwriting as well.

For each of your last four albums you have worked with a different producer. Is this an intentional part of your process, to keep things fresh?

We've been given the privilege to make all these records, so I enjoy keeping it interesting and reinventing the band on each one. I feel like we owe it to people who listen to us to make a new type of album every time. Having new producers is just another aspect of making sure things are different from album to album.

I heard you play a mean free jazz sax. Any chance of hearing that on a future Cloud Nothings album?

I'm not sure what place the sax has in Cloud Nothings. If a spot for it ever pops up, I definitely wouldn't hesitate to add it.

Do Cloud Nothings have anything in common — musically or otherwise — with someone like Albert Ayler?

Ayler was breaking barriers and pushing the limits of music and sound. We're just a band. S