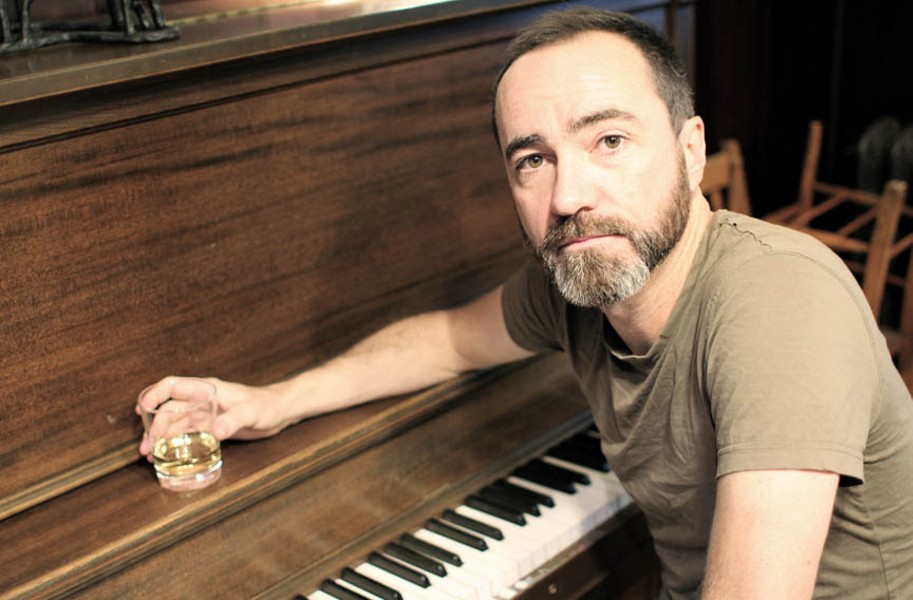 Founder, vocalist, guitarist and original member of the Shins, James Mercer, says he’s been changed for the better by family life.

“Simple Song,” a standout hit from 2012’s “Port of Morrow,” exemplifies that hunger in a perfectly ironic way. Listeners latched onto the multitude of hooks, rich piano riffs and soaring vocals. The song racked up 5 million views on YouTube for the Shins’ exceptional music video.

Still, some fans had questions, like: “Sounds great, but when will we get more of that original Shins sound?”

So it’s cheering to hear how the group’s first new album in five years, “Heartworms,” puts the band’s evolving sound into perspective.

The 40-minute-long player serves up classic Mercer alongside more risky experimentation. Detours into layered sound no longer seem like detours, but an unpacking of Mercer’s multiverse, which has always been present in his smart but compact lyrics. The album’s single, “Name for You” is a star example: It bounces along with a melody worthy of “Kokomo”-era Beach Boys and kicks around your head for days.

Life for Mercer in this 21-year-old band is following a similar course, he says: It keeps getting better, but more complex. Ahead of the Shins’ appearance at the National on May 17, he chatted with Style from his home in Portland, Oregon.

Style: Fans originally associated your sound with the analog warmth of an old cassette tape. Follow-up albums sounded slicker, but you produced this new album yourself, and it sounds like you’ve recaptured that beloved warmth. How did you do that?

Mercer: When I’m left to my own devices, there’s a lot of what people might call wasted time in front of the computer, debating ideas. During those moments, some of the quirkier ideas will be allowed to flourish. I really, really enjoyed working with Greg Kurstin on our previous record, “Port of Morrow.” But I kind of feel like that made me lazy, in a way. That record is as much his as mine. So I ended up wanting to attain his level of work, and the only way to get there is to try it yourself. I had a lot of fun working with modern programs and combining them with older analog gear. You get these weird accidents.

Happy accidents seem like part of the process for certain musicians you admire, like Ariel Pink. And some of the electronic sounds on your new album are so enjoyable because they’re almost humorous. Like an old B-roll documentary, “This is what an electronic keyboard sounds like: “beep boop.”

[Laughter.] Totally! Like a caricature. I think that’s what I love about Ariel Pink. It is kind of comic, and I’ve started to feel confident jumping into that.

You’ve felt confident exploring other mediums, too, like a collage app you just released called Pasted. After listening to “Heartworms,” the record sounds like a collage.

Oh yeah, the aesthetic of Pasted and the sound of “Heartworms” is very linked. Visually speaking, the app is what I was going for on the record. It’s kind of janky and analog-feeling, but you can do clean stuff too. I like using Instagram, and I wanted to put up abstract weird stuff — as well as pictures of the kids.

You have three daughters. The single “Name for You” is about them, right?

Yes, well, it’s also about my perspective shifting. As a young man, I was kind of a loser, which shapes your attitudes about women. Of course, that changed for me over time but especially having daughters now. So the song is about my shifting perspective on what it means to be a modern woman in the world.

Shifts for people often come when they articulate their attitudes with language, which is kind of your job as a lyricist. But also kind of risky in the age of social media mobs that police your every utterance.

Yeah, I agree. It’s a double-edged sword, you have to be careful. The best you can do is be honest with yourself and hope that your earnest attempt is perceived as honest. Sometimes when we get ready to play the song, I look out into the audience and pause for a second. Like, am I shaming people to reconsider their perspective? Because I wouldn’t want that. It’s more of an encouragement to young women to not let labels or tropes get them down. Just don’t let it f—- with your personal identity, is the message I gave to my daughters there.

You grew up in a military family, and heated discussions are a part of the love relationship you have with them. Does your mom like the song?

Oh, she does. My mom is quite a muse, actually. Growing up, my father was a singer. And my mom would sit there with her Miller Lite beer and smoke cigarettes, and she’d be brought to tears by some of his songs. I mean, that’s what you want for a muse. She just really loves music. She’s a huge fan of the Shins. S