Interview: Sandwiches That Will Change Your Life (Or Not)

Writer and restaurant owner Tyler Kord on his "Super Upsetting Cookbook About Sandwiches." 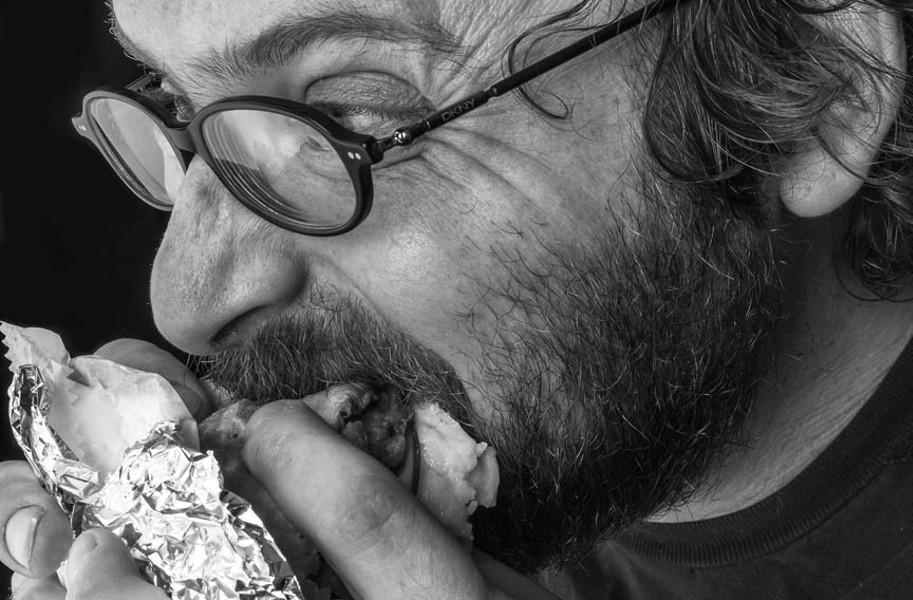 Noah Fecks Author Tyler Kord writes about more than sandwiches in his new book, “A Super Upsetting Cookbook About Sandwiches.”

Tyler Kord wants you to eat better sandwiches. And broccoli. Lots of broccoli.

The owner of New York’s No. 7 Restaurant and No. 7 Subs recently published “A Super Upsetting Cookbook About Sandwiches” — the title is a nod to Dave Egger’s “A Heartbreaking Work of Staggering Genius” — and on page 45 you’ll find a recipe for the Texas-Wisconsin Border sandwich.

Yes, that Border — the legendary Texas-Wisconsin Border Café on Main Street owned by Virginia Commonwealth University art school Dean Joe Seipel and others. It was a family hangout — Kord lived in Richmond as a child while his father, noted artist Victor Kord, served as chairman of the painting and printmaking department at the university during the 1980s.

But don’t expect a basic book of recipes. This is a cookbook with a voice — one that’s distinctive, hilarious and a little neurotic. I read every page as if it were a novel. The recipe descriptions wander into unrelated topics and there are asides, footnotes, redacted passages and even more parenthetical asides from his editor, Francis Lam, who is a James Beard- and International Association of Culinary Professionals-award-winning food writer and a judge on the show “Top Chef Masters.”

For example, Kord’s recipe for fried squid ends here: “Fry the squid. I don’t even know what it means to be a chef anymore.” His editor steps in: “Sorry, Tyler’s not feeling well. Maybe you should just follow the frying step for the fried clams on page 146.”

I decide that Kord’s brief residency — he was 3 when he moved here and 10 when he left — is enough to give him a call to talk about potato chips as a sandwich topping, grape jelly and the real cost of cheap food. (I forget to ask about the potato chips.)

Style: How did this cookbook come about?

Kord: I have a restaurant and some sandwich shops in New York, and — I don’t know — it seemed like it was time for me to write a cookbook. I knew I wanted to write something that was a little different, shall we say? The rest is history. Actually, it was tough to find someone who wanted to deal with it, but my editor, Francis Lam, read it and was excited. I don’t even like to write an email now without sending it to him first to edit it, because he’s so good.

I loved the fried squid recipe because part of it is redacted. What inspired it?

There were a couple parts that Francis and I argued about cutting — some parts were what I really wanted to write, and I get why it might be unprincipled, but I [didn’t] want to just write something else. Francis said, “Wouldn’t it be hilarious if we just redacted it?” It was his idea — and we only did it a couple of times. I thought it was really funny.

Good! You don’t see too many redactions in cookbooks.

You wrote a small cookbook about broccoli before this one. Why broccoli? Why is it such an important ingredient to you?

I’ve always really loved it. I don’t have a crazy broccoli story — it didn’t save my life as a child or anything — it was just the only vegetable I ate. And I realized that when I was coming up as a cook that nobody used it in nice restaurants. So when we opened [No. 7 Restaurant], I put it very prominently on the menu. I’m known for it — which is funny, because it’s just broccoli and everybody eats it all the time. No one [in the restaurant business] thought of it as a particularly cool or unique ingredient, but I think everybody just forgot about it.

I’m not sure why. … Grape jelly is pretty honestly just a vaguely fruity, sweet flavor. We consider wine to be something that goes with everything and that’s just fermented grapes. I don’t see why grape jelly can’t go with anything that wine can. It’s a goofy logic, but I’ve yet to find the thing that it doesn’t work well with.

You get serious in the book about cheap food.

It’s a weird subject because on one hand, we all work too hard and we pay too much rent. Life is tough, and so cheap food is awesome. But there’s kind of no such thing — someone is being negatively impacted when food is cheap. It’s either the environment or the people producing the food. Any number of things can go wrong — that do go wrong when we serve squid, for instance, for just a few bucks for a giant plate of calamari.

I didn’t set out to write the book about food politics and environmentalism. But it did feel very important that I not just ignore it. It would be so ridiculous that I would write this book in 2015, 2016, and just say, “Go buy some ground beef or shrimp,” without saying: “Go ahead and do that, but be thoughtful about it. Don’t just do it because you can. Know what you’re doing and what you’re getting involved in.” I didn’t want it to be a downer, per se, but hey — it’s called “A Super Upsetting Book About Sandwiches.” I laid it out there.

Are you on a book tour?

I’m too insecure for that. We talked about it but what if I go to these other cities and no one shows up? The wasted money aside, can my ego withstand it? So, I am not on a book tour. S