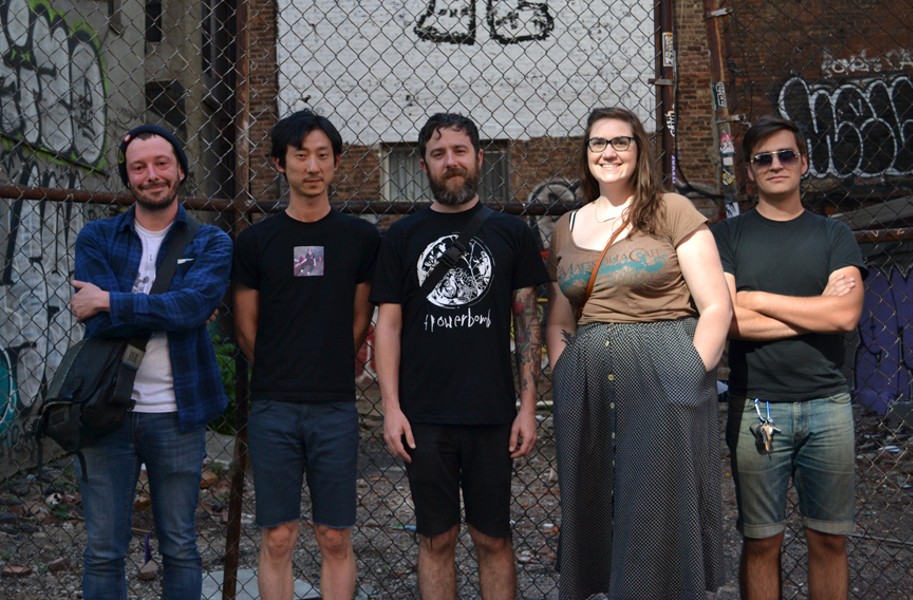 Behind every great band, there’s a woman.

“She makes all this possible, staying at home with our 5-year-old and 3-year-old,” he says. “She’s going to home-school them too. Without her, none of this could happen.”

Morgan is referring partly to the band’s latest album, “New Lions & the Not-Good Night,” and a recent tour that took it through much of Virginia along with Washington, New Jersey and two New York stops. Touring is the Virginia Beach native’s least favorite part of being a musician, albeit one he concedes must coexist with the production and recording that he much prefers.

Released in May by Egghunt Records, the new record is decidedly dynamic, wearing its math-rock influences and driving guitar sound proudly on its sleeve. It showcases the sprawling seven-piece collective that Morgan assembled after making his first album, “No Notes,” practically by himself. Early shows were notable for how fully formed the band sounded considering how recently members had come together.

“I never made it a point to write songs about kids and parenting,” Morgan says of the latest album’s themes. “I write about life and my experiences and it just oozes out. It’s a perspective shift, seeing not only what you’re living currently as a parent, but also rehashing and reliving my 5-year-old life, re-analyzing, now that I’m a grownup person, everything that happened to me then.”

Despite the somewhat deep subject matter, Clair Morgan’s songs come across as the best kind of indie rock with mesmerizing guitars, upbeat tempos and gorgeous backing vocals — ensuring listeners will dig the sound whether or not they pay attention to lyrics.

“Before I was a dad, I wrote about family and relationships, girls and getting mad at them, well, until I found one who didn’t make me mad,” Morgan says, acknowledging a mild midlife crisis a tad earlier than usual. “Even at 20, I had a tendency to write cryptically using weird phrases that meant something to me but that no one else would pick up on. That way I got out what I needed to get out without any backlash.”

The album is picking up steam, with USA Today premiering the song “How to Set Your Bed on Fire” by describing it as “a swirling and intricate blend of indie pop and math rock that feels precise but never cold.” Vice’s music site Noisey featured the song “Rogue Island,” calling it “Andrew Bird meets Teenage Fanclub.”

Recently, in the interest of making the band’s sound a little cleaner, tighter and easier to navigate, the septet has been reduced to a quintet, reinforcing the band’s running joke, “Clair Morgan is and is not a band.”

Even so, Morgan says he tries hard to function like a group with everyone — Ashley Moore, Troy Gatrell, Adam Tsai, Shannon Cleary and himself — contributing to the whole.

As is the case with passionate musicians, he’s quick to note that their music is almost everything to the band, so a huge part of their lives is spent honing and crafting with no clear idea of what may unfold. But it doesn’t matter because, as he earnestly explains, the band expresses what it feels like expressing and if anyone likes it that’s a bonus.

But if no one likes it, he says he’d still be doing the same thing.

“It’s constantly a balancing act, wanting the band to do well, but wanting to keep my family too,” he says two days before hitting the road. Nowhere is this more apparent than a Facebook post while the band is on tour acknowledging, “Tour is wonderful … but I miss my heart” over a photograph of his wife and children.

“Am I willing to spend six months on the road?” he asks rhetorically. “No, but if the opportunity presented itself, I’d want to talk about. I’ll always be making music. But if we don’t make it big, come back in 10 years and I’ll still be in Richmond making records.” S

Clair Morgan opens for Motion City Soundtrack on Aug. 7 at the National, 708 E. Broad St. Earlier shows may be announced. For information go to clairmorgan.com.