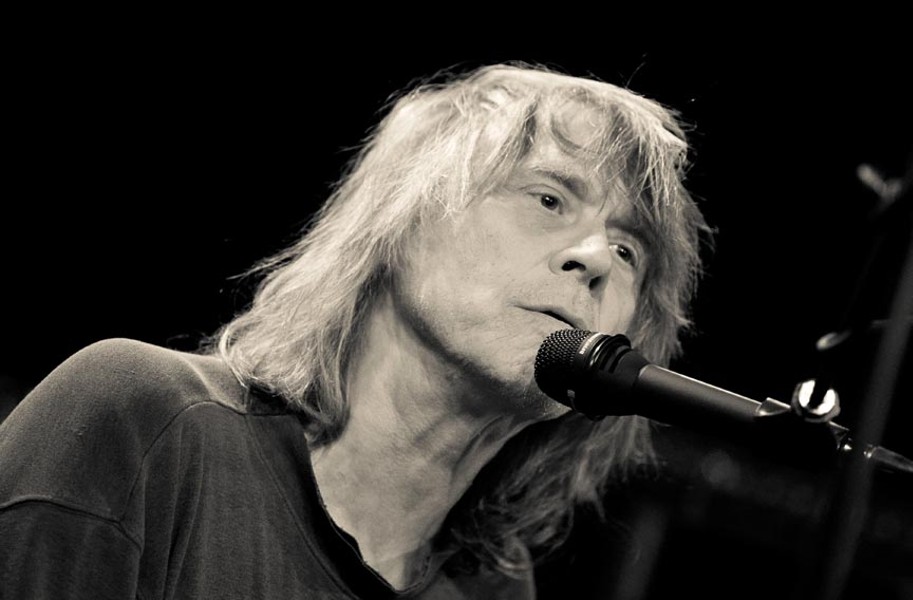 A hoard of musicians have clambered through Monk’s angular melodies, but few evoke his unpredictable delivery.

“Monk’s music is all about rhythm,” Adams says. “The piano is a real rhythm machine, and I have always been a rhythmic piano player.”

Adams is best known for playing with NRBQ, the New Rhythm and Blues Quartet, the quintessential rock-and-roll bar band he formed in 1967. But he’s amassed some interesting credits in jazz, touring with composer Carla Bley’s band and playing cello on saxophonist Art Pepper’s classic “Winter Moon.” He also performed recently at the Richmond Folk Festival with the Sun Ra Arkestra and has recorded with Marshall Allen, its leader.

He first saw Monk on his 15th birthday. “My father offered to take me to a baseball game,” Adams says. “I was so mad I walked out. He didn’t know me. I don’t like sports. Then he asked me what I wanted to do. I said I wanted to see Thelonious Monk in Cincinnati.”

It was the first of many times. “After that I went to see him as much as possible. I had some short exchanges with him. He didn’t talk much, but he was friendly.”

Adams was at Monk shows so often that Monk’s friend and patron, Pannonica de Koeningswarter, known as the Jazz Baroness, added him to her permanent guest list.

“When I was living in upstate New York and I used to drive down to see him in the city. It was a long trip to the Village Vanguard on a single road, southbound Route 9 changing in the city to Seventh Avenue. ... All the time I was listening I was learning, trying to hear what he was playing as best I could,” Adams recalls. “I still have sheets of manuscript paper with a lot of chords erased and replaced.”

His band NRBQ started adapting versions of Monk songs in the ‘60s. Assaying the complexity with a propulsive backbeat is unconventional. But given that Monk’s work is intensely rhythmic and rooted in the blues, an R&B angle seems obvious in retrospect.

The bulk of Adams’ new album bears this out. “I actually had more [songs] recorded,” he says. “We used the ones most natural for a rhythm and blues band to play. The ones that I could say something that nobody else has.”

The tracks are varied and consistently interesting. Some hew fairly close to the stripped-down originals, others not so much. “Think of One” gets a raucous bar-band work-over. “Straight No Chaser” has a pedal-steel-country twang. The closing “Ruby My Dear,” the sole studio recording, is lush and cinematic with sweeping horns and strings.

“There is something about Monk’s music,” Adams says. “It is not like typical jazz, just playing the notes in the melody right and then going off to do something else. It has to stay in that spiritual place.”

While Monk’s music is not the only thing NRBQ will play at its Nov. 25 performance at the Tin Pan, Adams says it will definitely be in the mix. “It is best just to let it happen,” he says. “We’ve played a lot of music tighter for a long time. But I don’t know what is going to happen until I see the room.”

Even as his band approaches the half-century mark, the experience remains fresh and transcendent. “In the best live performances you leave the place you are and go somewhere else. It’s a high that can last for days. You leave the stage and it is hard to hold a conversation.’

‘Because there is no limit to what music can do. It lifts the spirits to another place. It makes life better for everyone. The first song you hear can affect your whole day. And your positive attitude puts other people in a good mood.”

Adams closes out the interview with one last story. He was 19 years old, just starting out, sitting in a club waiting to listen. Monk walks in the door, sees him and comes over.

“You know what’s wrong with the world today?” Monk says. “Teenagers are crazy.”

“So here I am now,” Adams says. “The crazy teenager, sending out this music to him. And you know what? I think he likes it.” S