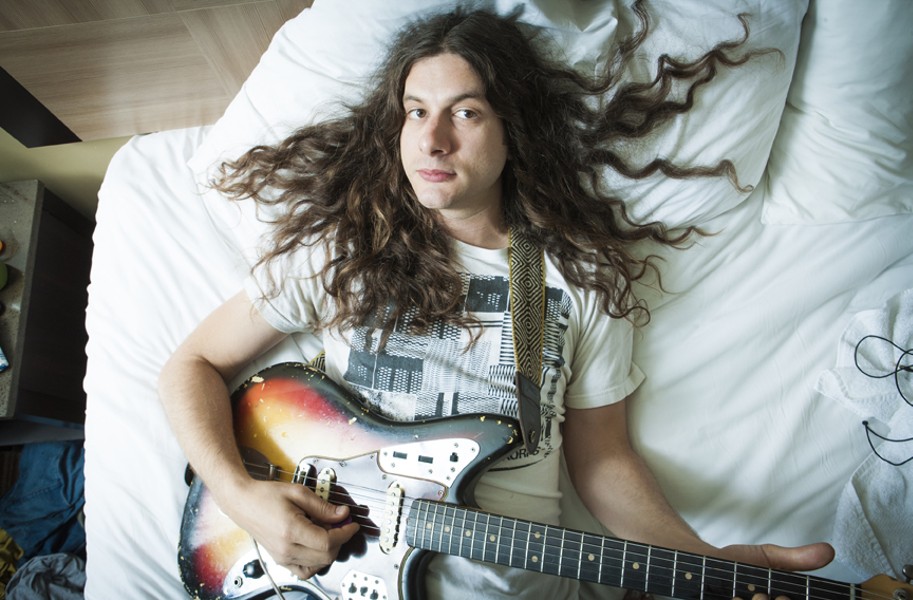 Singer and guitarist Kurt Vile is known for his “slack, unspooling guitar songs” in the recent words of New Yorker scribe Amanda Petrusich. The 36-year-old Philly guitarist is touring behind his sixth studio album “B’lieve I’m Going Down” (Matador).

In the cinematic video for “Pretty Pimpin,” the lead single on his most recent album, Kurt Vile leaves a classic Southern California bungalow to wander the streets of Los Angeles, seemingly in search of himself.

“All I want is to just have fun, live my life like a son-of-a-gun,” he sings over a circling guitar riff. “I could be one thousand miles away, but still mean what I say.”

It’s a catchy, radio-friendly tune and good primer on the warm, slacker-rock approach that the War on Drugs founder — and former forklift driver — has been honing over his last few acclaimed records: laconic delivery and finger-picked guitar, character-driven lyrics with an overall spacey vibe that drifts in the melodic winds.

Vile spoke with Style from his home in Philadelphia, where he lives with his wife, Suzanne, and two daughters, who are being home-schooled.

Style: What’s your take on the Philly scene now?

Vile: I mean, it’s chill. We have the same little house we’ve had since 2009 but we took a wall out so it’s not so small. I go to the Record Exchange and hang out with my buddies Richie and Max. We’re kind of in that Watery Love family, Birds of Maya, Purling Hiss, Spacin’ — it all overlaps. We’re all old friends, record nerds at this point. … I heard that new Sheer Mag single [“Nobody’s Baby”] and liked it.

Last time you played here was a sold-out Strange Matter show in 2012. This time you’re playing a much larger outdoor venue at Brown’s Island, right by the river. Is there a dynamic you have to account for in larger spaces?

Yeah, last time I think it was with Sore Eros and the Supreme Dicks. That’s news to me about the river. Sounds amazing though. … It’s been steady growth, a little bit at a time. I feel like if you play outside it’s probably good to be loud. I’ve had good experiences and terrible ones with both, you know? But something tells me this will be good.

I heard you just met a musical hero, Neil Young, in Nashville. How’d it go?

Well, that was the second time actually. The first time Kim [Gordon] and Thurston [Moore] introduced me and I gave him a CD. But this time I got backstage with my wife at an outdoor venue and we talked to him. I got a picture so it was better [laughs]. I’ve seen him play like 12 times and I told him that his show with the Promise of the Real band was the best I’d seen. They did a 30-minute “Down by the River.” … Yeah, he’s the only person I know who can really sound like himself and deliver things the same way as he’s aged, while still evolving. … He’s intense, man.

Do you have songs written for the next record?

We’re going to work with Peter Katis soon, he mixed the [current] record last minute, pretty quick and did an amazing job. … I’ve got lots of new material written, some leftovers and new stuff. I write really slowly, laid-back, kind of. It’s the kind of music where you can get lost in the riffs. … I’ll start recording the next record this summer. I’m going to keep it real and organic, but I’m sure it will be a little more spaced out. I’m all about not overdoing anything. After a certain point, all the overdubs cover up the song. With Pro Tools … I feel like everything can become a straight line of compression. I want to get back to the ’60s, ’70s, even ’50s style of playing real music. Just playing it live in the studio as much as possible. For me, it’s often those early takes [that are best].

How much has Appalachian music influenced your playing?

My dad is into the Appalachia thing, so it’s in my blood. The soundtrack for me growing up was stuff like Flat and Scruggs. My dad gave me a banjo, taught me some claw-hammerish things. Then I stopped learning that and wanted to strum guitar. I got back into that style later, around 2000ish, and it’s evolved. … The single from this new album, “Pretty Pimpin,” kind of has a reverse “Sweet Home Alabama” thing, but more dark. I knew it sounded like [Southern rock] but I saw on YouTube people are saying I’m ripping off the Outlaws. I didn’t steal it from anything. There’s only so many notes, they’ve all been used millions of times [laughs]. … Other people were mad when I played on TV with J. Mascis and I didn’t have him play guitar.

[Laughs] Yeah, I know. Nah, I’d like to jam with J. some more. We just did a cover of “Box of Rain” by the Dead, where I sing and he shreds a solo in the middle [for the “Day of the Dead” compilation benefiting the international Red Hot Organization, a nonprofit for HIV/AIDS awareness]. S

Kurt Vile and the Violators perform with Lucy Dacus at Friday Cheers on June 10. The show starts at 6:30 p.m. Cost is $10.