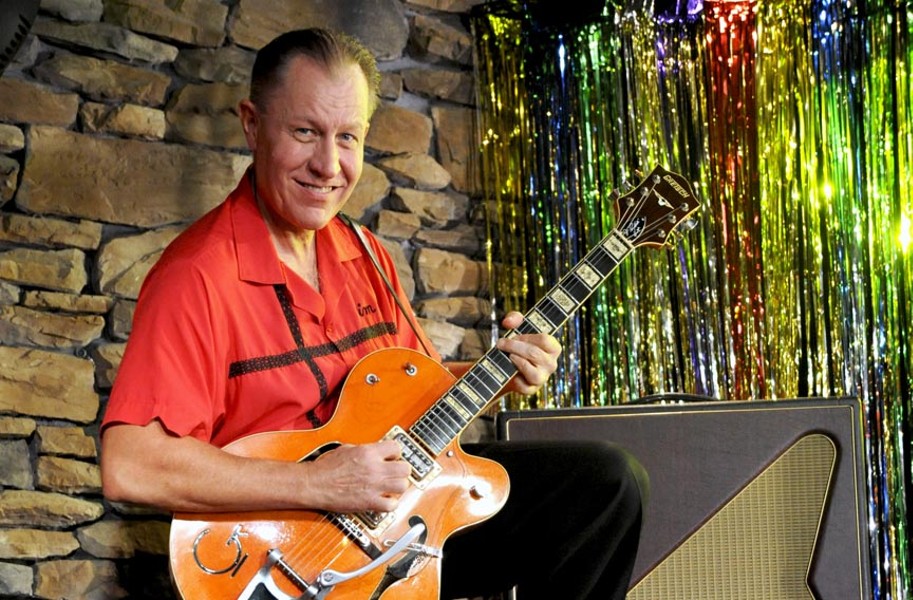 Jim Heath is known as the Reverend Horton Heat.

Like the itinerant preachers of old, guitarist Jim “Reverend Horton” Heath has been burning down that lonesome highway for more than 25 years now.

His high-energy rockabilly trio, Reverend Horton Heat, is known for blasting humorous, observational retro songs filled with loaded .38s, wild young ladies, tequila shots and space heaters. The band released its 11th studio album in 2014 on a new label, Victory Records, which became the highest charting record in its career. Next up will be a 7-inch released on Record Store Day, April 16, featuring a raw country song, “Beer Write This Song” and the bluesy rocker, “It’s a Rave Up.”

The band’s appearance at the Broadberry this Friday with Unknown Hinson (the guy who plays the hillbilly squid on Adult Swim’s “Squibillies”), Nashville Pussy and Igor and the Red Elvises is sure to be one of the year’s best pure rock shows. If you don’t believe me, you can trust Heath’s friend, the recently departed Lemmy Kilmister of Motorhead, who paid the group one of his highest compliments: “[Rev. Horton Heat’s] great and plays the music he believes in and nothing else. Go see him or I’ll kill you.”

Style: Any Richmond memories stand out over the years?

Heath: Just some really nice people I’ve met. My first gig in Richmond I met a guy named Billy Pitman — he was playing with Jimmy Vaughan for a long time. I think he had moved there because he was a chef in some restaurant. … Another time I went to the Gwar slave pit. That was great. I got to see the original costumes in back that were all breaking down, I think they were made of some kind of food product [laughs].

Condolences about Lemmy from Motorhead — I know he was a friend of yours who you recorded with and played shows with. How will you remember him?

He was this gruff rock personality but he’s actually a very sweet person. Losing that one girlfriend of his — I think that affected him more than he would ever let on. Just a real sweet guy. Very well read about wars and the history of the world. He knew a lot about World War II, and fewer people know this, but also World War I. He seemed to think due to the personal aspect of it, WWI was worse — with the trenches and nerve gas. He had a pretty good understanding of how the world works through the history of wars. … We did a tour where he would come out in the middle of our set. We would leave a Marshall amplifier out there and he would play with us. Great memories now.

You’ve got a song, “Schizoid,” on the new album that really sounds like an old-school punk barnburner. Which punk bands had the biggest influence on you?

Yeah, that song is an old one that went through several versions. … When the Ramones hit Texas in ’78, people started really trying to figure out what was going on. I didn’t know what to think. There was a great guitar player named Cid Sanchez in Corpus Christi who loved the Sex Pistols. … [But for me] the Cramps played a show, maybe in ’80. I thought I was going to punk rock show, but they were up there playing rockabilly licks — fuzzed-out Duane Eddy-type guitar, “Surfin Bird,” “The Way I Walk” by Jack Scott. I was thinking, “Man, this is roots, every song is blues changes.” That solidified what I wanted to do: take rockabilly and express to a punk rock crowd. There’s not that much Cramps influence in my music, but the idea was influential. Then the Blasters, one of my favorites, came to Dallas and they played the Hot Klub, the punk-rock club.

So the whole psychobilly tag for you is kind of a misnomer.

We do a lot of psychobilly festivals. But I’ve never considered Reverend Horton Heat to be a psychobilly band, because we can do country, we can get bluesy. And the psychobilly scene is well established over in Europe, going back to ’79 with the Meteors. I have respect for those bands, and we fit in; but I consider us to be a band that uses rockabilly as a platform but we do all sorts of other things. I’m influenced by so many different kinds of music. I can start out making an album, something hits me, and it ends up totally something else — maybe more rock.

I think the last time I saw you was '95 maybe, at the Great American Music Hall in San Francisco with the Cows opening . . . It's easy to see you’ve really become more of a showman over the years. Who influenced you in that regard as a live performer?

Oh wow, that was pretty early on, yeah . . . Well, I’ve learned from all sorts of people. Growing up, to get to see local guys [in Dallas]. I’ve been in some bands with some real entertaining people. In general, watching Jerry Lee Lewis or Elvis or Little Richard. Also, when you’re a band rat like me, you get to know when a guy has good crowd rap. The basic thing is to engage the people as much as you can. It’s not easy -- being a guitar player, I’ve got to keep my mind on my hands and fingers.

Once I was at Neil Young’s Bridge School benefit at Shoreline in Mountainview, Ca. and it was raining between sets. There was some technical problem and the crowd was getting antsy. All of a sudden, Robin Williams shows up. They hand him a mic and he walks into the crowd and starts improvising with people, totally off-the-cuff, and I’d say within 30 seconds he had 20,000 people almost in tears laughing. He was a master.

Oh yeah, that’s a cool story. You know I saw him too in the early 80s at the Comedy Corner in Dallas. My wife worked at the club, so she called me and said he might show up. And he was unreal. So funny, the way his mind works – just an incredible performer. But I’ve definitely picked up stuff from comedians, films, whatever else.

The Ventures, any one of them. I’m not sure I know what the original Ventures is, I have a bunch. They repackaged a bunch of them. There’s something about them that is so musical – “Pipeline,” “Walk Don’t Run.” Dick Dale is up there. Davie Allan and the Arrows. I don’t know, that original Shadows album, maybe. Man, that’s cool.

How do you get your sound? You’re not a Marshall stack guy.

Nah. People don’t realize about Marshalls – they’re very clean. The only way to get that tone is to crank it all the way up. That’s for arena bands. Most bands get a little dirt out of a pedal or master volume thing . . . [This tour] I’ve got a couple Gretsch executive amplifiers. Kind of like a Standell, one 15-inch speaker, but not really powerful output tubes. It’s only rated about 20 watts. That way I turn it up to 10 and go . . . I get my dirt out of the amp.

I like that song of yours “Loco Gringos like a Party." How did that one come about?

That’s a reference to a band called the Loco Gringos who were in Dallas – in the mid 80s to early 90s. They had a song called “Fruit Fly” and another called “Nurture My Pig.” They were a great band, but they were a 24-hour, seven day a week party, and they loved Mexican culture. They’d wear big sombreros when they played, all this kitschy Mexican stuff to the gig. Once a year, they would get in a bus painted like a Mexican flag and drive it to the Jose Cuervo tequila factory with 20 people . . . the lead singer died really young. His brother still gets together and does some gigs with the band. They don’t party as much as they did back then.

You have a new video for the song "Hardscrabble Woman" coming out soon -- what the story behind the animation on that?

Yeah, oh you gotta see it. There are these twin Ukrainian girls, sisters, the Mad Twins, who do animation together. They finish each other’s sentences. They’re very talented. They love American roots culture, punk rock, Hank III, Social Distortion, us, they know about the 50s and history of rock and roll, rockabilly. They didn’t know how to speak English. Awhile back they started going on Social Distortion chat room, or whatever. That’s how they learned to speak English. They would ask, “what does oblivious” mean? People would help them and now they can speak it.

How does your music get out there these days?

Well, what happens with us – it's always a mixed crowd, old and young. Once people get in their 30s and 40s and have kids, they’re not actively going out and seeking bands. Young people, though, that’s our bread and butter. They’re the ones going out. Word of mouth is still our best. I think we do well with young people because our music is fast and energetic.

Have you ever gotten any blowback from the politically correct police for any lyrics or for using Reverend and not being religious?

No, I really have never had that. There was one time where we opened for Dwight Yoakam back in the 80s where some religious people were out there saying something, but I just heard about it, it didn’t affect me. It’s been all-good. I think people realize that it’s a funny little thing.

It must be tiring to do this high-energy music, after 30 years, for six nights in a row, then one night off.

Yeah. We just can’t party like we used to. The other night I was playing a gig and I just watched a guy do 10 shots of tequila on stage. If I did that, I would have to go the hospital. I don’t want to say who it is.

Ohh man, you’re good. How did you know that?

I saw on your Facebook page that you just played with him.

Any one piece of advice to new bands from a road warrior?

I can almost guarantee your success with this piece of advice: Get a good running van with good tires. If you can have successful shows in your hometown, you can do that in every other town in the world, maybe. For sure, in America. You just gotta get in the van, and keep going back, keep going back. You can get the best record people in the world, but you’re still going to be in that van. It’s really, really difficult physically, mentally, emotionally, to be in a stinky van with people for six months straight. … Though if you can’t catch on in your local scene, then it’s going to be hard everywhere. Work on your local scene and your local town first. S

Reverend Horton Heat performs with special guests Unknown Hinson, Nashville Pussy, and Igor and the Red Elvises on Friday, Jan. 29, at the Broadberry. Doors open at 7 p.m. and the show is at 8.