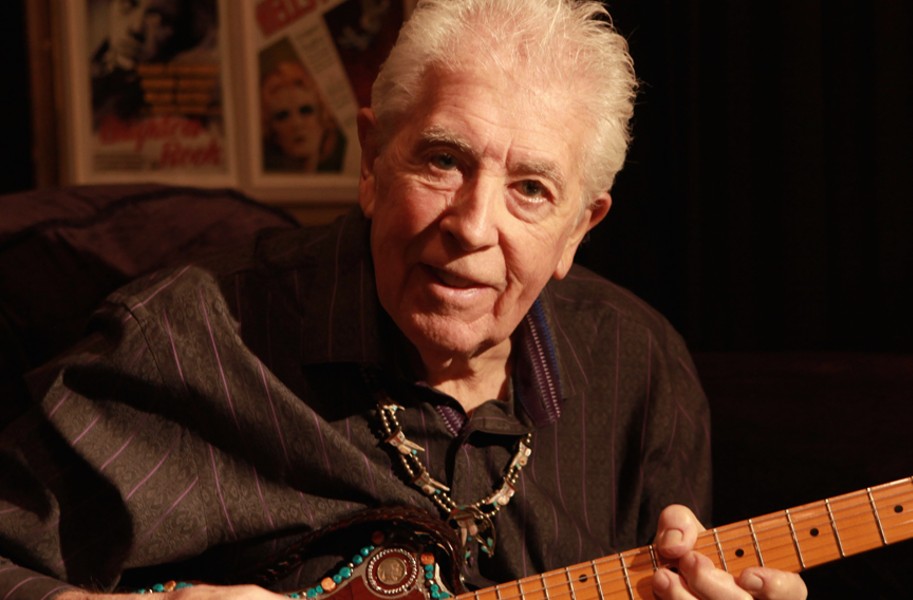 In the live opening of the classic album, “The Turning Point,” a guitar and flute jam takes flight during the pro-pot anthem, “The Laws Must Change.”

Recorded at the Fillmore East in 1969, the song proves that John Mayall could breathe new life into the blues like few others — the message it sings is still relevant today:

Lenny Bruce was trying to tell you, many things before he died / Don’t throw rocks at policemen / But get the knots of the law untied.

Today Mayall is known as the godfather of the 1960s British blues boom, having employed young musicians including Eric Clapton, Peter Green, Mick Taylor, Jack Bruce and Mick Fleetwood in his band the Bluesbreakers. Even at 82, he leads a high-energy band.

His 1960s group was a farm team for some of the best musicians to come out of England. But focusing on that dimension of Mayall’s career threatens to obscure his real contributions. As a musician and bandleader, Mayall pushed beyond the confines of blues to encompass jazz, rock and other genres.

It remains his approach on his most recent studio album, last year’s “Find a Way to Care.” While not explicitly aping the sound of old, the album is similar in sound to such classic ’60s LPs as “A Hard Road.”

“It’s just the way things come out naturally,” Mayall says. “I don’t have any choice. I express myself through music.”

“It’s all part of the same thing, jazz and blues together,” Mayall says. “New Orleans-style jazz was popular for at least 10 years on the British charts and in the clubs. It wasn’t until Alexis Korner and Cyril Davis got the blues scene going that blues took over.”

The Bluesbreakers quickly established themselves as the vanguard. Mayall never found it difficult to find excellent musicians, he says. “For me, it’s always been pretty much a no-brainer,” he says. The success of those players’ later bands — Cream, Fleetwood Mac and the Rolling Stones, to name a few — is a testament to his eye for talent.

Among young and talented players keen to prove themselves, egos often clashed. In the 1960s the Bluesbreakers experienced a lot of turnover. Not so in later years. Mayall notes that his current band — including older, seasoned veterans who’ve played with Buddy Miles, Junior Wells and Buddy Guy — “has been together seven years already.”

Mayall launched his recording career with the 1965 Decca LP “Mayall Plays Mayall,” cut live at the London club, Klook’s Kleek. It was an audacious move: Few bands start their careers with live recordings.

“I think it was [Decca’s] idea,” Mayall says. “Because their studio was next door to the club. All they had to do was run some cables out the back window of the studio and into the premises of the pub next door. Other people had recorded live albums there, so it wasn’t quite that unusual.”

Considering the string of 11 albums the Bluesbreakers released on Decca between 1965 and 1969 (not to mention Mayall’s 50-plus albums since then), one of the most striking qualities — beyond sheer instrumental firepower — is the stylistic breadth of the music, from hard-rocking blues, soul-jazz-styled arrangements with brass to acoustic-based country blues.

Mayall’s American tour takes him to 17 cities across 18 days in March, a grueling schedule for a musician half — or even a quarter — of his years. But he thinks of touring as a holiday from home life, he says. “What we don’t like is having days off, because then you lose the momentum. If you’re going to be traveling away from home, there’s no reason why you should sit in a hotel room waiting for the next day to come ’round.”

“It’ll be a creative time, featuring a selection of tunes that’s different every night, because we have so much to choose from,” he says. “People are going to be quite delighted with the variety.”

“When the doors open, people will see me there in the foyer — I sell my CDs before the show,” he says. “And after the show, we all come out and sign CDs. Everybody who wants to has a chance to shake hands.” S

The Tin Pan presents John Mayall on Sunday, March 13, at 8 p.m. Tickets are $75 in advance, $80 at the door and are available online and through the Tin Pan website, tinpanrva.com.