Interview: Joey Santiago of the Pixies talks about his influences, new work, and playing “Trompe Le Monde” at a strip club 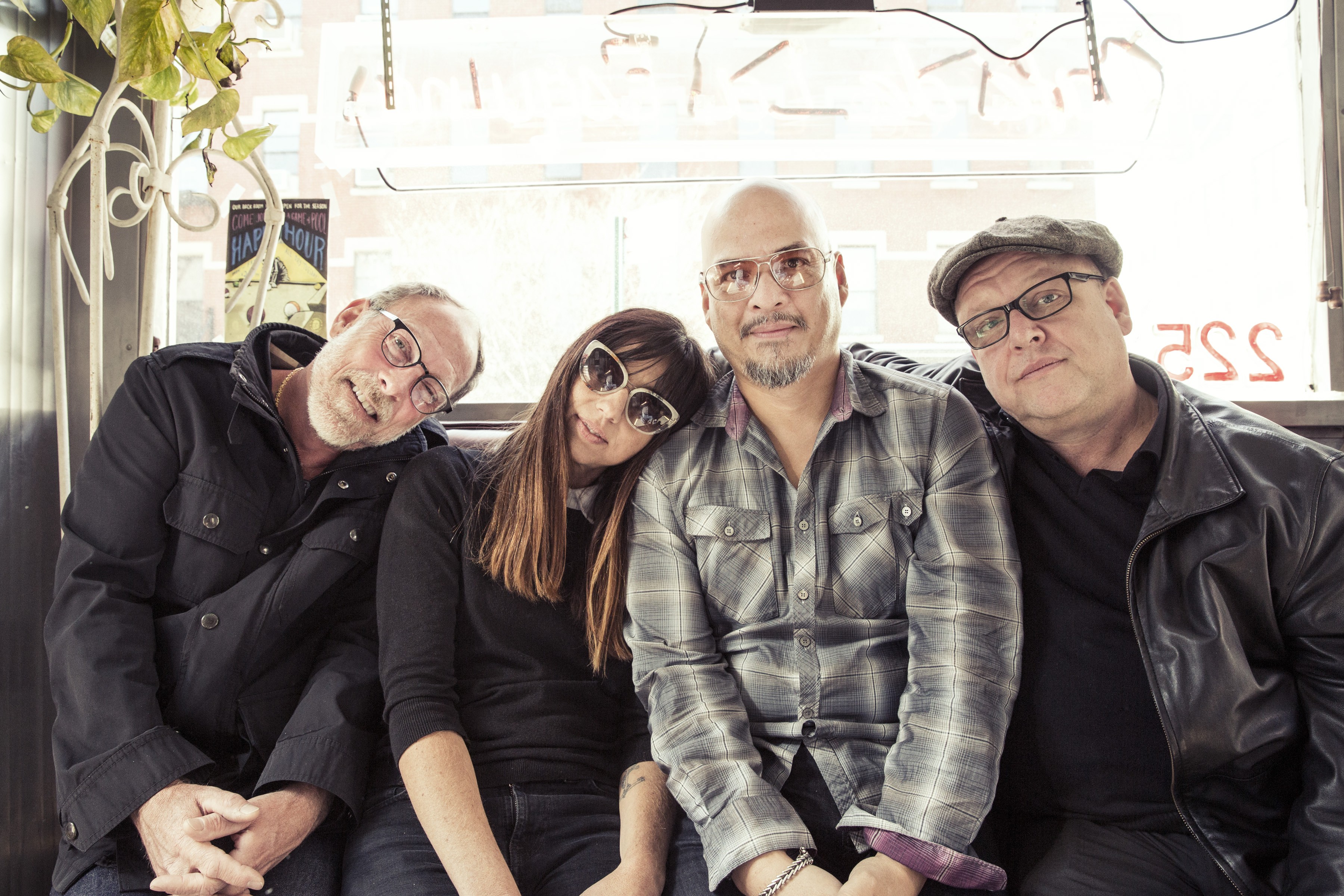 Joe Santiago has been described as the quiet one in the Pixies, though critics have always recognized his searing, melodic guitar lines as a huge driver of the influential rock band’s sound. The Filipino guitarist didn't seem so quiet when we spoke by phone.

“They say that, but I’m actually the funny one,” he says. “And I say that because it’s true.”

A founding member of the Boston foursome who helped inspire the alt-rock movement of the ‘90s, Santiago was busy working on soundtracks and other side projects when frontman and principal songwriter, Charles Thompson (or Black Francis) decided to reunite the group in 2003. They had broken up rather unceremoniously in 1993 and pursued various solo projects for the following decade.

Since the reunion they’ve been selling-out regularly around the globe and have released two new albums of original Pixies music – the critically disappointing “Indie Cindy” and last year’s “Head Carrier” which received better notices.

They’ve also had some tabloid moments, with original bassist Kim Deal leaving the group in 2013, and more recently, Santiago entering rehab for a month to handle drug and alcohol issues. He has noted that this tour will be a dry one in order to help him maintain his sobriety.

Style Weekly: So about your influences. Last time I talked to you about this it was many years ago and your side project, the Martinis, was playing a tiny bar in Chico, Ca. and we were chatting at the bar. I only remember you mentioning Donovan.

Joe Santiago: Oh yeah. I mean Donovan, I don’t know who his session players were, but I’m pretty sure Jimmy Page was one. The guitar work on everything was really [great]. One of the first solos I absolutely had to get my head around was “Sunshine Superman.” It’s just a ridiculous solo that to me kinda was funny, didn’t make sense. Kinda like me. I never make sense. People laugh at me.

Do you ever feel captive to the style you’re known for as a guitarist?

No, not really. I used to think that, and I thought it for a brief moment doing “Head Carrier,” where I was hanging onto a fucking note again. And I went, “shit, here he is again.” And [producer] Tom [Dalgety] said “Joe, you’re allowed to do it” and I said “yeah, you’re right I am allowed to fucking do this.”

It just comes through naturally. It’s like tying your laces when you’re about to walk, it’s just stupid not to do it. And I hear it . . . It’s weird how low my self-esteem is – I wonder whether I can rip myself off. Are people gonna slam me for sounding like me?

This new album, “Head Carrier” people are calling more of a return to the classic Pixies sound. Does it seem that way to you?

Yep, it certainly does. That was my goal. To really embrace what I managed to sculpt all these years and not run away from it anymore [which] I kinda did with “Indie Cindy” . . . I had a way different [Moog] set-up on that record. It just seemed more apropos, it gave us free reign to experiment when Kim Deal left the band . . . exactly, yeah, we also had an alien theme going. Just run away, run away [yells] run away!

I swear to God or whoever, I really love playing these songs on the new record, and we play ‘em all. It feels exciting because it’s new.

Have you ever heard feedback from Kim about the new records?

Oh, no. Totally normal. Because when we don’t work, we hardly talk to each other. Charles and I talk on occasion, but I rarely hear from [drummer] David [Lovering]. The last tour, Paz [Lenchantin] and I were hanging out. But we all have our things, relationships, cleaning wreckage up that we caused, or other things we’re too busy doing [when not touring].

Has the youthful enthusiasm of new bass player Paz changed the social dynamic in the group?

Yeah, if anything she reminds us that we’re really just a bunch of young idiots. Though she’s not one, far from it - - she’s probably one of the most intelligent people I know. But yeah, she does bring that in and it’s catchy. Positive is catchy, and negative is the same. We’re latching onto this positive shit for sure.

So you grew up in Manilla for 7 years or so. Have you been back to the Philippines? Do you speak Tagalog?

Yeah I speak it a little. We went back in ‘95 on a medical mission that my ex-wife’s family runs. David went with us, he held the heads of patients who were getting their tooths pulled out [laughs]. And I was the pharmacist! How ironic is that? You want drugs, go see Joe. I still have aunts, uncles, nephews and nieces there.

Did you feel like the Pixies documentary, which kind of focused on David’s substance issues, sensationalized the group at all? David told me you guys were pretty boring on the road.

It is show biz. I knew what we were in for, I knew there would be an arc I just didn’t know what it was gonna be. Yeah, it is boring as shit. I think Thom Yorke said it was one of the most honest portrayals of a band – that’s really what it is. God forbid you come backstage to one of our shows, you’ll be shocked how creepy it is.

Do you think there should be more political music during the Trump age?

Well, that’s other people’s jobs, not ours. But yeah. I’m glad the Machine is back, Prophets of Rage. I’m dying to hear that album, see what the hell they got to say. I think Chuck D is up there, Zack has his own thing going. I don’t really know. Kudos to bands that will do that. I won’t talk about John Lydon’s [Trump comments] but . . . whatever [changes his mind and refuses to talk about him].

I think one of my favorite Pixies albums is “Trompe Le Monde.” You seemed to crystallize something on that record, and it sounds great loud. I heard that’s one you haven’t listened to much, though.

I listen to that one the least, its true. But there are some gems in there that I forgot that are weird. Like “The Navaho Know” and “Lovely Day,” oh my god, what is that? That’s just ridiculous guitars and shit on that one. Schizophrenic . . . You know, I did play that album at a strip club [in Atlanta] one time. The strippers almost fell off the bar. And they took it right off. I was like, “I told you it wasn’t stripping music.”

Are there any of Charles’ solo songs that you wish were Pixies songs?

Hmmm. I never thought of that. Yeah, I’m sure there are. Maybe a song like “Los Angeles” or “Soda Jerk” I think that’s the name.

In terms of legacy, what decade do the Pixies naturally fit in – I always thought of you as an ‘80s band – a bridge from college rock to the alt-rock ‘90s. What do you think about the band’s legacy?

Yeah, late ‘80s, early ‘90s. Just lucky. We could’ve sucked. But it was just the right place, right time, right people, having [Charles] as a roommate. It was just luck, you know? When bands start off, when I say good luck, I realllly mean it [laughs]. It’s just fucking luck . . . All these bands are putting up stuff, but I don’t know if they’re putting their heart and soul into playing live. It’s no secret, you gotta kick ass live. You don’t get it just by releasing shit. You don’t have to go to LA or London or anywhere. You gotta prove it on your local ground first.

I’m looking at your website. I think the Richmond show just sold out.

What? It’s sold out? Then why the fuck am I talking to you? They call me Ticketmaster Joe!! I sell fucking tickets by talking [laughs]. Maybe I’m here to solidify our legendary status and our self-deprecating . . . whatever.

The Pixies perform at the National with Cymbals Eat Guitars on Tuesday, May 9 at 8 p.m. The show is sold out.