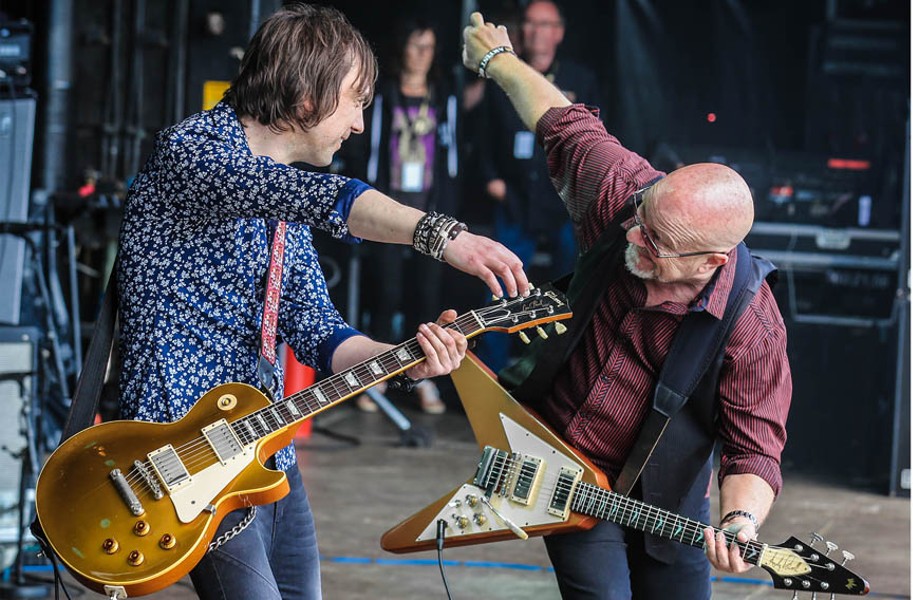 Guitarist Andy Powell, at right, is an original member of the influential 1970s British group, Wishbone Ash, which opened for the Who. The first band is performing an intimate gig at the Tin Pan.

In the early 1970s, Britain’s Wishbone Ash shared stages in the United States with dozens of American bands. Relentless touring cemented its reputation here, as it won over audiences with a trademark twin-guitar attack.

Its1972 album “Argus” topped British and American polls and was the record that defined Wishbone as an iconic guitar band. Andy Powell, guiding light and sole original member of the legendary and highly influential band, still heads Wishbone as it gears up to start the Tough and Tender tour, which will feature acoustic and electric versions of its songs.

As an example of the band’s influence, consider: In 1974 it recorded “There’s the Rub” in the same studio and with the same producer the Eagles would soon use for “Hotel California.” The twin-guitars of that song sound heavily influenced by Wishbone.

Style spoke with founder Andy Powell about some early influences and his impressions of the U.S. when the band first started.

Style: Andy, it’s great having the band in Richmond. What were some of your early musical influences?

Andy Powell: I was 14, and I opened for a band called the High Numbers, which later became the Who. Even as a young teen you went out and played little shows and you made a few shekels.

Around ’66, ’67, I started to see a lot of bands. In the U.K. it was the golden age of the mid-’60s, the blues boom was happening, with bands like Zoot Money, the Small Faces, John Mayall with Eric Clapton. That period of time was extremely important for me, and a couple of bands really influenced my direction musically, and one of them was Fairport Convention. Their sound gave rise to the folk-rock element of our music, which has always been prevalent. Of course the blues thing, with bands like Peter Green’s Fleetwood Mac, it was really an eclectic mix then.

What about some favorite records in the early years?

The John Mayall record “Hard Road” was a seminal one for me, and certainly “Fresh Cream.” I saw Cream’s first show and realized the blues could be almost interstellar. Doing a complete 180, I’m a huge fan of Joni Mitchell. She opened my eyes to songwriting. I’m a huge Little Feat fan. Then, of course, all the Muscle Shoals, Stax and Motown, James Brown stuff, I’m a massive fan of all that.

When I got to the states, that just blew my mind. We were on a major tour, it’s like hello, America — you’re opening for the Who for eight dates. Then we opened for bands like the Guess Who, the Doobies, the Allmans. Bruce Springsteen opened for Wishbone when he had just a little bar band from Jersey. I got exposed to a phenomenal amount of American music, so I was able to explore my interest in the roots of it all.

How did the development of the twin-lead-guitar sound come about?

It was primarily a band called Blossom Toes, and there was a period of time where we were developing alongside Fleetwood Mac, who was also dabbling with twin lead guitar. We weren’t copying these bands, because our music had its own style. From my teen days in soul bands with horns, I was very attuned to working out harmonies. The first song Wishbone wrote was “Blind Eye,” which was an attempt to emulate a horn riff in harmony.

Why the longevity of the LP “Argus,” an album that has always seemed out of its time?

I think we were hitting our stride and were making music on that album that just flowed beautifully, and we were carving out a niche for ourselves. A big influence on “Argus” was that we were playing in this country, and we realized that we had to slow our music down, simplify it, to get it across in these big stadiums in America.

Fifty years on, do you still get the same thrill out of playing live that you did from the beginning?

I feed off it, and I’m never more happy than when I’m doing what I was set on earth to do, which is to play live and perform. When I’m playing a song like “Throw Down the Sword,” I’m just lost in space. It’s what I’m supposed to be doing. It’s where I’m most comfortable. Music is like speaking in tongues. S