Rock legend says the Allman Brothers will reunite with Dickie Betts soon. Until then, he’s high on his funky new band. 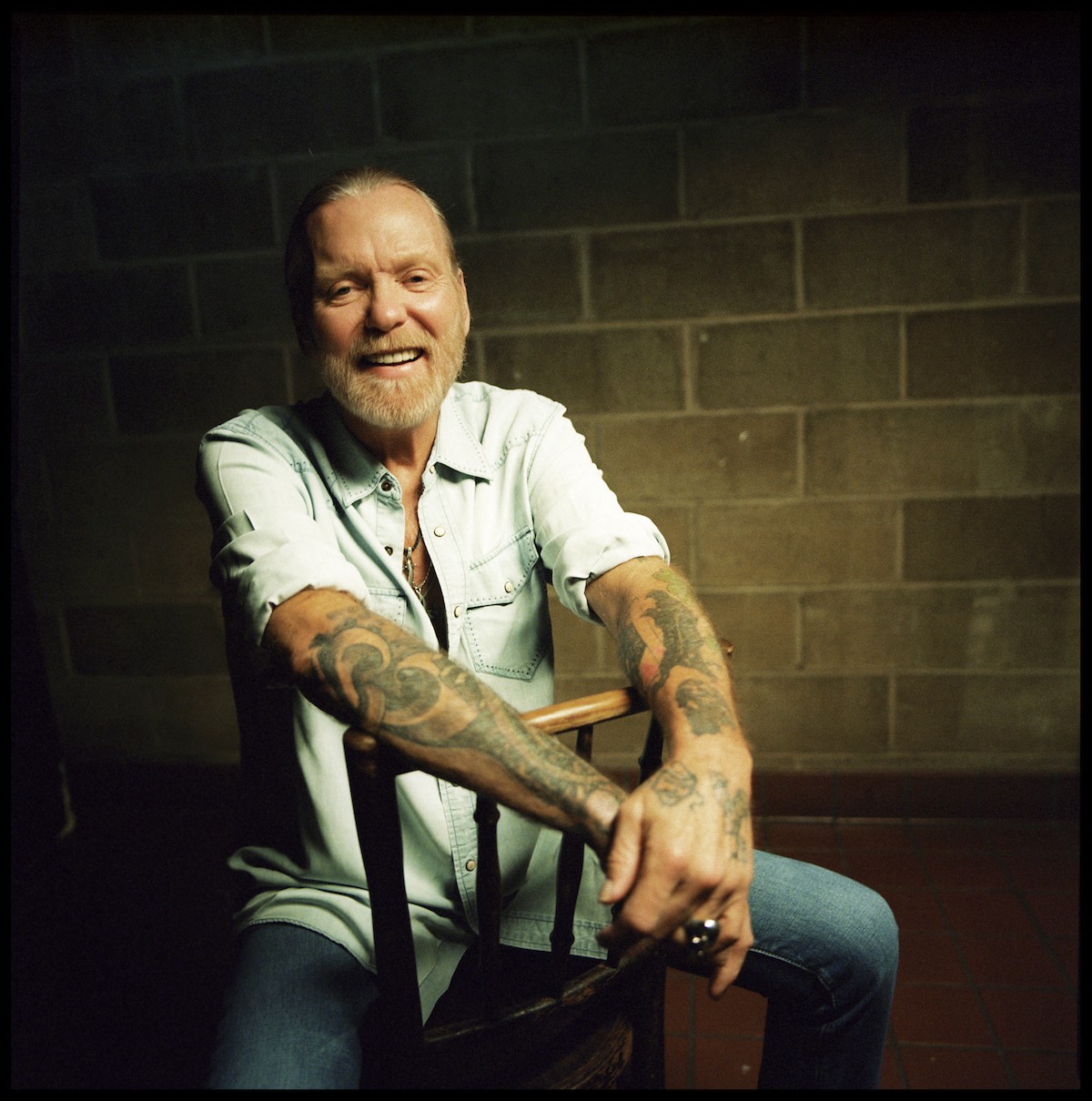 Against the odds, Gregg Allman is still kicking.

A founding member of the southern rock and jam-band prototype, the Allman Brothers, the gritty-voiced, Hammond B3 keyboardist chronicled his life in the 2012 autobiography, “My Cross to Bear,” co-written by Alan Light.

With a down-home narrative style, Allman takes readers on a journey from his fatherless youth in military school to the traumatic loss of his brother Duane, a slide-guitar prodigy killed in a motorcycle accident in 1971, through the group’s massive chart-topping successes in the ’70s.

Allman had short-lived marriages with many women, including Cher, cranking out kids with many of them, while helping fellow Georgian Jimmy Carter rise to political power and occasionally acting in movies.

Through it all, he stayed faithful mostly to his musical calling, as well as heavy drinking and drugs. But with his health faltering in recent years -- a case of hepatitis C led to a liver transplant -- the 68-year-old reportedly has cleaned up. Since the Allman Brothers officially called it quits last year, Allman has been working with a solo group and recording a new album at the legendary Muscle Shoals studio, FAME. He says he can’t talk about the music yet, but he’ll be playing the songs in Richmond.

Also he is curating his own traveling music festival, the Laid Back Fest, which this year is featuring local group People’s Blues of Richmond on the bill at Red Rocks alongside ZZ Top.

“We played Lockn’ last year, which was one of Allman Brothers’ last shows,” PBR bassist Matt Volkes says. “Gregg Allman is rock ’n’ roll. He paved the way for a lot of us. … [He’s] badass.”

Speaking to the grizzled rock veteran on the phone, Allman was friendly but not particularly elaborate. He didn’t seem to want to talk about the past much and often answered with wheezed chuckles, his thoughts seeming to hang like the Spanish Moss that surrounds his custom-built Tudor-style home just south of Savannah, Georgia.

Style: How are you feeling these days?

What can you tell me about this new band and new record?

I tell ya, it’s one of the most incredible recording experiences I’ve ever had. We did some beautiful music, man. Funky stuff. Got two first takes on this record. That’s a good sign ... It took me seven years to find ’em all [band members]. I found the first guy, me and him found the third guy, three of us found the fourth guy, it went on like that. I only had to make two changes. I had a chance to get two of Bobby Bland’s old horn players and I jumped at the chance. … Man, they don’t ever have a bad night. I swear. That’s why I handpicked ’em. I got anybody that I could learn from. That had to be one of the qualifications.

Back in the heyday of the civil rights struggle, you had a black drummer in your band in the Deep South. How do you feel about racial divisiveness today?

Well, that’s the good thing about musicians. There never has been any color. I’ve never ever had any kind of run-in with somebody of another race. Just never been in my world at all, you know? When I see stuff like that, man, I just … this asshole Trump. If he gets in, man, it’s gonna be the biggest mistake America ever made.

He doesn't come off as very presidential.

Have you spoken with [former Allman Brothers guitarist] Dickie Betts at all since his brother’s death?

Ahhhh. [long pause]. We, uh. We haven’t talked face-to-face in a long time. But we give messages to each other. I think probably next year, or definitely the next, we’ll do an Allman Brothers reunion tour. Should be pretty good.

I saw where an old 1971 Allman Brothers show, a radio broadcast, is being released in early April.

Do what now? Oh really? First of all, we’re probably due for the Guinness Book of World Records for jive-ass, lying, thieving managers. You see, back in the day, when we did these things after the fact they always put a clause in there that the record company owns your record, so they can repackage ’em, put a new skin on ’em, sell ’em again. … But ever since the Internet started it’s made record-making a joke, you know? All you gotta do is go to Spotify to get it for free, man. People go to Starbucks and spend $5.26 on a cup of fucking coffee and they drink it down, and it’s gone, man. But no, they can’t spend a buck for a song that will last ’em the rest of their days. Figure that out.

I was happy to see you picked a local group, People’s Blues of Richmond, for your national Laid Back Festival.

Oh yeah, we usually try to get some up-and-coming [bands]. Got shows this year in Chicago, Nashville, Atlanta, New York, and Red Rocks in Colorado. Next year there should be eight. Gonna put one up in Portland, one in San Francisco, one down in Florida somewhere. This Laid Back fest, we started last year in Jones Beach, was a total success.

My fests are about music and food. We get all the local chefs, high-dollar to what have you, BBQ. You get VIP tickets, you can taste everything. Drink everything from beer to champagne. Smoke a fat one and have yourself a good day.

I was sorry to read in your book about the tragedy with your father near Virginia Beach.

I was 2 years old when it happened, man. He picked up a hitchhiker and the guy murdered him. I never knew what it was like to have a father. Tell you the truth, I had this little friend down the way I used to play with. Around 5:30 every day this big gorilla would come in and start pushing him around. I said, “Man, who the fuck is that?” He said, “Oh, that’s my daddy.” I said, “What?” He said, “My father.” I said, “What the hell is that and I’m glad I ain’t got one” [laughs hard].

Yeah, my dad had stopped off at a bar on the way home. He had just come back from the Korean War and was shellshocked. My mother said it was probably just as well.

You were once planning to record an album with Tim Buckley. Did you have songs ready for that? That could’ve been nice.

Yeah, really. I woulda done it too, but he died on me, man. I’ll tell you, I did one of his on my new record … but I can’t tell you about the new record. Gonna let it hit you all at once [laughs].

Will there ever be a movie about your book after what happened on “Midnight Rider” [a film director was convicted of felony negligence after a train bridge mishap killed a member of the crew]?

I don’t know, man. That was a total fuck-up on their part. I wasn’t even in town when it happened. Yeah, that guy’s in jail just where he needs to be.

Actually, he just got out this month for good behavior. After serving a year.

Oh, is he out? I don’t see how he still has a license [to make films].

I don’t think he can for 10 years as part of his sentencing. Do you ever consider acting anymore? I see that movie “Rush” is on cable now and then.

I don’t know, man. I’d like to do some voiceovers. Those Pixar things. Cartoon-like.

Your classic song “Whipping Post” has been covered by Zappa and sampled by Jay Z. It has one of the most dramatic endings of any song in rock history -- with all the stops and crescendos. Do you remember how that finale came about?

[Laughs slowly] Ahhhh, not really. That was a long time ago, brah.

The Allmans played at James Madison University when I was a senior and I saw you guys at the Del Mar Fair in California. You’re a hell of a blues singer. Just seems to get deeper into your voice as you age - you're really one of those instantly recognizable singers.

Thank you, man. I hope I’m learning and writing a new one on my deathbed [laughs] … Just do not vote for Trump. Get rid of that guy. I mean, what an imbecile. They’re like a bunch of children up there, man. Him and Cruz.

I take it you’re not feeling the Bern?

Bernie don’t look like he’s going to last a term. I just don’t see how you can start that important of a job at the age of 82 [Sanders is 74]. You gotta have all your marbles.

Nah, looks like I’m gonna have to go for the lady. Ain’t much choice.

Gregg Allman performs with Gabriel Kelley at the National on Sunday, April 10. The all-ages, seated show is at 7:30 p.m. Tickets run $40-$75. Thenationalva.com.