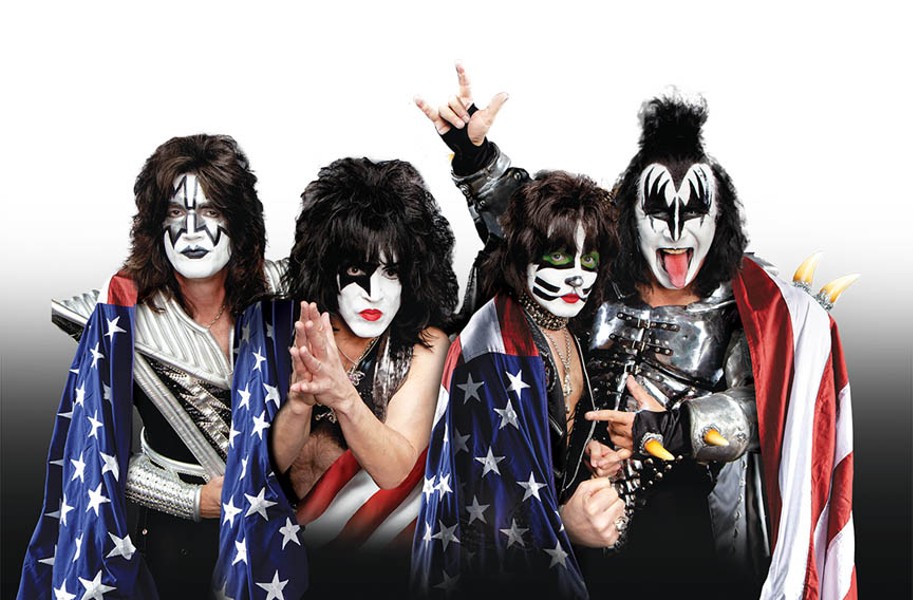 For a good three years of my life, all I remember is Kiss.

As any child who fell under the original shock-rockers’ spell during their heyday in the 1970s might tell you: I wasn’t only a fan, I was obsessed. I lived, breathed and was defined by my all-encompassing passion for the kings of the nighttime world.

Though I eventually revoked my membership in the Kiss Army during the onset of puberty, I am who I am today because of them — in particular because of the band’s fire-breathing mastermind and most iconic member, bassist and vocalist Gene Simmons.

While I wait on the phone to interview the legend about the group’s Friday, Sept. 9, appearance at the Richmond Coliseum, I realize that I’ve spent the majority of my life waiting for this very moment. After what seems to be an eternity, I finally hear his unmistakable baritone, a voice I’ve heard thousands of times before.

“Hello, Mr. Simmons. My name is Chris Bopst and I can’t tell you how much I appreciate you taking the time to talk to me.”

It was true. It’s not every day you get to interview one of your childhood idols.

These are the first words he said to me — words I’ve been waiting a lifetime to hear addressed to me: “Excuse me, but can you get off the line? I am in the middle of an interview and I don’t know who you are or why you are interrupting us.”

Awesome. I don’t know how or why it happened, but somehow I’m connected to him in midinterview with another reporter.

“I’m sorry,” I say, and hang up the phone. The 11-year-old boy inside me is crushed. Ten minutes later, his slightly annoyed publicist calls back and our interview finally begins.

It is true: The man’s entire career is built on how great it is to be Gene Simmons.

“That’s one thing I got from Kiss, was a bold, uncompromising belief in self,” I tell him, laughing. “Do you think that is a fair assessment?”

“It’s more than fair,” he replies. “There are two choices in life. One is to be pathetic and uninspired and the other is to look in the mirror sand say, ‘Yeah, I’m kinda cool.’”

This cocky self-assurance is the center of his band’s appeal. If one lyric sums up the Kiss philosophy, it is “You’ve got to treat yourself like No. 1, do you need to be reminded” from “Shout It Out Loud” on the group’s breakthrough 1976 studio album, “Destroyer.”

The other thing that defines Kiss is that it gets no respect. Liking Kiss as a kid was the surest way to be mocked and ridiculed by older friends, siblings and critics.

“I’ve spent my whole life defending you guys,” I tell him, “People think you are stupid if you like Kiss.”

“In terms of defending anything, this is America — of the people, for the people, by the people. And the people have spoken loudly and clearly. Kiss is America’s No. 1 gold record recording group of all-time, period,” he says. “It doesn’t matter what critics think.”

I begin to tell him I think Kiss’ induction into the Rock and Roll Hall of Fame is a vindication for fans — and he cuts me off.

Crucial to understanding Simmons is his lifelong journey. Born Chaim Witz in Haifa, Israel, on Aug. 25, 1949, he immigrated to New York when he was 8. His single mother, Flóra “Florence” Klein, a Holocaust survivor and the sole surviving member of her Hungarian family, raised Simmons to take advantage of every good thing life has to offer.

“My mother was 14 when she went into the concentration camp. She went through unbelievable hell, but she didn’t let it define her,” Simmons says. “She worked to make life better for us, and from her I learned the importance of hard work and dedication.”

He concludes, “Everything good about me comes from her.”

The ultimate immigrant story — “We came to America legally,” he makes a point of stressing — Simmons is the living embodiment of the American dream.

“The idea of America that you could be a first-generation immigrant and America allows you the very same opportunities — if you work for it — as anybody that has been here for generations is astonishing,” he says. “That’s what makes America the best county in the world.”

By the end of my conversation with Simmons, he confirms what I have suspected — this mama’s boy is no dummy. His bravado and bombast precedes him, but you don’t achieve his level of success by accident. He’s living proof that if you work hard enough, anyone can rock ’n’ and roll all night and party every day. S