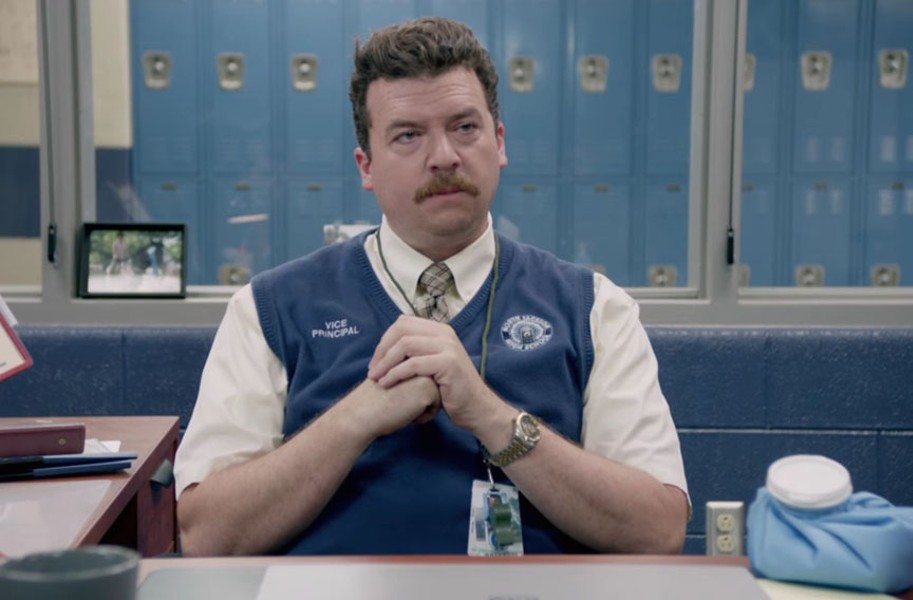 Comedic actor Danny McBride can bluster better than anyone.

As the mulleted, drug-addled, ex-major-league baseball star Kenny Powers on HBO’s “Eastbound and Down,” his crassness seemed to swell with each ridiculous moment, dripping sweat, spit and stupidity.

Or as Neal Gamby, the douche canoe vice principal from the current HBO comedy “Vice Principals,” McBride continues to show his knack for finding the fragile heart within his foolish, arrogant characters.

He knows how to write and play Southern characters from firsthand experience. He grew up in Fredericksburg, where he still owns a house, and says his first job was at Kings Dominion. He studied filmmaking at the University of North Carolina School of the Arts, where he met frequent collaborator, writer and director, Jody Hill.

Initially, McBride wanted to direct, alongside classmates such as Jeff Nichols (director of “Loving”). But after turning heads as a blowhard karate instructor in “Foot Fist Way,” his acting career took off. Since then, McBride and Hill have forged a successful television and film career that often finds them pushing the envelope with humor that verges on politically incorrect.

“Vice Principals” recently finished season one of a two-season run, and the acclaimed comedy team will be presenting the show at the Virginia Film Festival in Charlottesville on Friday.

Speaking by phone from Los Angeles, McBride comes across as friendly, down-to-earth and polite. He says he loves the food at Heritage and gives a shout-out to Richmond friends, the Sparattas. His folks still live in Fredericksburg and he hopes to “rally a few to come out and watch this disgusting show I’ve made.”

Style: Do you feel your acting success got in the way of becoming a filmmaker?

McBride: It definitely has. I love writing and being behind the camera. But every time I’ve tried to put aside some time to focus on [directing], some sort of opportunity comes down. You’re like, “Well I guess I should go make ‘Alien’ with Ridley Scott, or go to Morocco with Barry Levinson and Bill Murray.” [Laughs.] So it keeps pushing it off. That’s what’s cool about “Vice Principals” — it’s not just in front of the camera. You have to be involved in every aspect behind the camera, too. So it’s been a way to scratch that creative, behind-the-scenes vibe.

How did you and Jody Hill find such great chemistry?

You know, Jody is a guy I met on the first day at the School of the Arts in Winston Salem, North Carolina, as my parents drove away and left me in the dorms to fend for myself. There’s always been a comfort level with him. We have a similar sense of humor and are drawn to the same stories, I think. Also, we have an enormous amount of respect for each other, which is always helpful.

“Eastbound,” or anything like that, requires so much time away from family, away from other things. You have to be in the trenches with someone you don’t want to kill at the end of the day. And someone who will pull their fair share; it’s as important to them as it is to you. That’s how it always is with Jody.

How have you been able to maintain artistic control throughout your career, especially in such sensitive times?

We were out in L.A. for years trying to play the game and we weren’t getting the opportunities. So as a Hail Mary we went back to North Carolina, shot “Foot Fist Way” funded entirely on credit cards. I think when you come into the industry making your own rules, people aren’t surprised that you continue to do that.

We enjoy HBO because they trust the filmmakers. They don’t make you jump through as many hoops as you have to in the studio world, where you have to test-screen cuts, you know, a million people weigh in on what works or doesn’t. HBO allows you to skate under the radar. It doesn’t matter if everyone doesn’t show up the first two days it comes out, it can actually breathe and people can find it at their own pace, which is exciting, especially when you make weird shit like we do.

You’ve said that “VP” is a tragedy disguised as comedy. And you used to substitute teach in Virginia. When you were filming, did you ever think: “This easily could’ve been my life?”

[Laughs] Well, I’ve always known what I wanted to do since I was a kid. Even when I was subbing I saw that as a moment to gather material. I’ve always been able to spin my own failures into lessons of growth [laughs]. Like when I was living on my parents’ couch and bartending, that strange time, which was very dark for me, turned out to be full of material I’ve been able to mine since then.

But as far as tragedy, with a lot of our comedy we don’t approach the writing as if it is a comedy. We like to approach it as something dramatic then figure out how to put as many dick jokes in there, or ridiculous humor in there, to disguise it. We really did want to present people with a broad studio comedy about two guys who work together — then throw that on its ass and fuck with people’s expectations. There’s a lightness to the show with musical choices that hearken back to the innocent ’80s teen comedies.

Your shows have the best music variety on television. Who picks that?

You know, Jody and I are big music fans and have eclectic collections. Our good buddy Devoe Yates, who we went to film school with, has always tipped me off to weird bands and genres. We just always keep in touch and share bands and music. He’s been a big collaborator. At the end of the day, we pick everything.

So you worked at Kings Dominion as a youth? Do you have enough material for a show?

I did, I did. That was my very first job. I think I only lasted three months. It was too long of a commute for a 15-year-old from Fredericksburg. So ...

When I was a little kid, I punched the Huckleberry Hound character in his furry blue underbelly and the guy picked me off the ground and tried to choke me out, Vader-style.

[Laughs] You got what you deserve, man. You can’t do that to Huckleberry Hound.

Do you feel like you’ve figured out the edges with comedy — how far you can go?

I’m not so sure we’ll ever figure that out. Lot of times Jody and I just have a very fucked-up sensibility. Things we don’t find offensive at all people will be enraged by. I don’t want to lose that. I think it’s good to hit the edges, in comedy or drama. It causes discussions that are interesting, makes people question what they like, what they want — that’s what art is supposed to do.

I know a couple people who wouldn’t watch “Eastbound” because they intuitively felt like you were mocking the South. Do you ever get that?

We don’t get people against it that much. People like seeing their region portrayed. We’re the greatest champions of the South in Los Angeles. We’re surrounded by an industry with no real understanding of it, or if they do it’s based on old, unfounded stereotypes. And we still have a big connection with the South.

To me, I would just rather write stories about the part of the world I know the most about, which is why we keep setting stuff there. The biggest fools are always these characters and we go out of our way to explain where they’re coming from and their hang-ups — but the world around them is grounded with honest, real people who aren’t cartoons.

Next summer, you’re in “Alien: Covenant.” Were you a big fan of the franchise?

Oh yeah, I was a humongous fan. Just to be able to work in spaceships, running around from creatures, getting into gunfights. Any fan would love that, but with Ridley Scott it was awesome. I haven’t seen anything yet, but what I loved about the script is it was straight-up horror movie and reminded me of the original “Alien.” It starts in a dark place and gets worse from there. I think it will be a treat for fans. ... It’s not so much that I wanted to do more drama, I just always choose projects based on whether I want to see them or not.