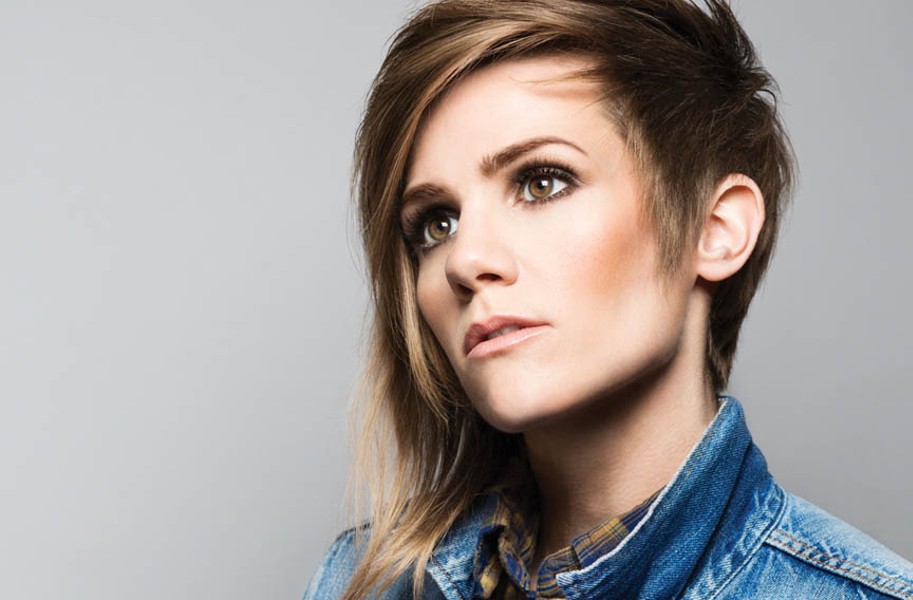 Los Angeles-based stand-up comic Cameron Esposito has no qualms about poking fun at her lesbian haircut, one she lovingly refers to as “the side mullet.”

The asymmetrically coiffed entertainer also will tell you she wears flannel, recently married a woman, and deems her period completely disgusting and useless.

If her material sounds personal, it most certainly is — and hilarious.

“It’s the whole reason I got into comedy to begin with, to talk about what it’s like to be me. That’s what stand-up is,” Esposito says. “I didn’t choose to be a lesbian, but I chose to talk about it.”

In nine years since her first gigs at Chicago comedy clubs, the 34-year-old has knocked out a career’s worth of work. In addition to honest and thought-provoking stand-up gigs, Esposito is host of two podcasts — Put Your Hands Together and Wham Bam Pow — and cranked out a charting comedy album, “Same Sex Symbol” (Kill Rock Stars), in 2014.

She’s also no stranger to the talk-show circuit, showing up on “Conan,” “Last Call with Carson Daly,” and “The Late Late Show with Craig Ferguson.” The latter is where late-night legend Jay Leno deemed her “the future of comedy” following a side-splitting television debut.

“He just said what I already knew,” Esposito says, laughing. “No, it was wonderful to hear. No matter what you think of Jay Leno, he’s been a professional in the business for years. And so successful on many levels.”

The Chi-town native didn’t realize comedy would be a career until her college years, but she recognized the thrill of being in front of a crowd immediately. As a kid, the school she attended didn’t have art programs and the comic says she was a jock.

“I always loved giving presentations though. That was the best thing,” Esposito says. “Reading the room and delivering the right energy. That’s a crazy thing for a fourth-grader to feel, right?”

As she was figuring out her career path, Esposito was also discovering her sexuality and came out at 20 while attending college in Boston. “I wasn’t even fully out because I was at a school that didn’t protect same-sex couples,” she says. “You could have gotten kicked out of school for being gay.”

Massachusetts became the first state to legalize same-sex marriage the week after she graduated. “My whole adult life, which has coincided with my comedy life, has been this push for LGBT civil rights and equality,” she says. “I came of age right when this was an issue at the forefront of social conversation.”

Late last year, she married fellow comic Rhea Butcher. “To be at the other side of a fight that’s been going on for years is odd. It feels awesome, but it also is like, wait, what? What am I supposed to do now?”

Esposito has plenty to do. She’s preparing to write her autobiography and has two television projects in progress. Esposito also appears in a Garry Marshall movie, “Mother’s Day,” starring Julia Roberts, Kate Hudson and Jennifer Aniston coming out this spring, and a handful of films screening at Sundance. “Seems cool — so I might check it out,” she adds. “At the very least, because I have a new suede vest to wear.”

For inquiring minds, her trademark vests are few and carefully selected from vintage shops on the road. “They’re hard to find in a size and shape that I feel makes sense for me,” she says. “I’m a short person.”

Funny business aside, Esposito realizes she’s in a prime position to make a difference with her work. She’s a staunch supporter of Planned Parenthood and often works it into her act. When asked if she’s cool with being a spokeswoman for the LGBT community, she explains it’s just the natural trajectory of things.

“I would find myself on these bills where three straight guys in a row would talk about marriage equality,” she says. “Whether an ally or otherwise, it wasn’t coming from the perspective of someone it actually affects. I felt like I made a choice to speak on my own behalf, otherwise they’d speak for me.” S