INTERVIEW: Agents of Good Roots’ Andrew Winn looks back on 25 years of music 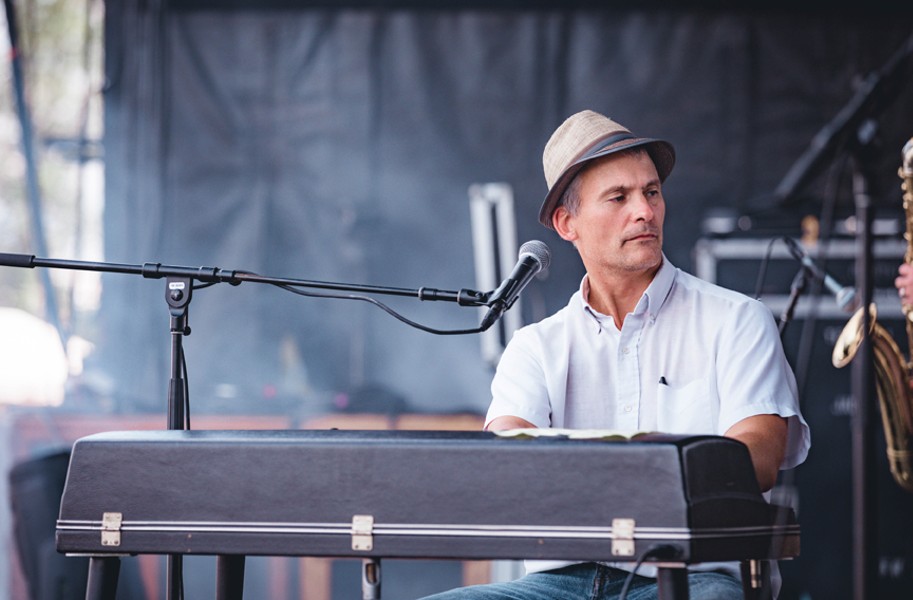 Talk to anyone who lived in Richmond and attended concerts in the early '90s and you'll likely hear some similar stories. If the person was into the jam-band scene, for example, there's a decent chance of a mention that Dave Matthews used to play weekly at the Flood Zone, just before becoming a big star.

At the time, guitarist and keyboardist Andrew Winn was a young, working musician who used to check out the Matthews shows religiously. Standing in front of the stage, he would take mental notes for his own burgeoning group, Agents of Good Roots, a free-flowing, jazz- and rock-influenced band that, for a time, was following closely in the Dave Matthews Band's footsteps. But although Agents scored a major record deal with RCA, they never broke through to mainstream audiences. Frustrated, they basically faded from the scene in the early 2000s and began raising families.

Last year, after the death of close friend and spiritual advisor, Jeff Peskin, the group reunited for some shows. Right away they were selling out venues in Richmond and Roanoke, as well as being asked to play bigger festivals such as Lockn. Now the band is writing songs and looking to record again, with Winn anticipating that new music will be available online in the spring.

On the eve of the group's 25th anniversary show at the Broadberry, Style spoke with Winn, a Roanoke native, about his long and winding musical road.

Style Weekly: When I first met you, we were freshman at James Madison University in the early '90s. I remember you playing in a cover band at the time, doing stuff like Van Morrison's "Domino." Then last summer, I ran into you on the beach with your kid for the first time in many years.

Andrew Winn: Yeah, I've got a boy who's 10 and a daughter who's 8 now. My brother Gordon and I had a band in high school called Chinese Fire Drill that used to drive up to JMU and play [fraternities] when I was still in high school.

I left JMU in '92 because I wanted to be around a more happening music scene in Richmond. I was watching Dave Matthews weekly -- that was inspiring. Then I ran into [drummer] Brian Jones who was over at University of Richmond. He and I hit it off, started writing songs. I could tell Brian was deep into music, and he brought this huge jazz element, which I had never listened to before. He turned me onto a lot of different music. We called in my buddy Stewart Myers who I had grown up with in Roanoke.

So we started playing little places in the Bottom around '93, tiny places. Bottom line is I wanted to play live a lot, so we just did it. There was this little place called Grumpy's that was right across from Hole in the Wall, owned by some brothers. They were nice to us. We played in a closet basically, but it was fun.

I remember being impressed that you had the raspy, sort of Tom Waits voice so young. But that came about because you almost died from a skiing accident when you were 14, when the pole punctured your throat.

Yeah, I think most people know about that. You know, Brent, the more I delve back into this music now being older, I'm starting to appreciate my voice more. Back then there was pressure to perform or sing or compose like artists who were popular – to blend in. I wasn't tapping enough into who I was. I really do think that now, it just feels like everyone is who they are, which is better. We're not trying to present something. We all just play the way we play. I used to dodge my voice, you know?

When did things start to take off in Richmond?

So I used to be standing in the crowd watching Dave Matthews up front, I think he recognized me as this insane fan. Some people would say it was going nowhere, and I always said, 'No, this will be huge.' It was different from the grunge thing going on.

We sort of used them as a model. We met some booking agents down near the beach, Mike Luba, who now manages String Cheese Incident. He's way involved in that whole scene now with his [publicity] group, Madison House. He took us under his wing, booked some college gigs with Gibb Droll, Everything. That was like, '94 or '95.

People may not know that you have a doctoral degree in classical guitar performance.

Yeah, I was studying music all along. I went to VCU to study classical guitar, and stayed on and got a masters there by '95. Then the band started getting a little traction and at that age, I was all in. We got in Brian's minivan and started going up and down the East Coast playing shows, learned a lot by doing that. We got noticed for some similarities to DMB, having a sax and instrumental component.

Coran Capshaw wanted to sign us around '96, which was a huge career booster for us. Yeah, that's how our contract with RCA Records came about. We did the Horde tour a couple times. Got to play with Derek Trucks, John Popper, that was a total thrill. It's funny, when we played Lockn last summer I saw Trucks backstage and said, 'Hey man, you played with us at Horde in '97." He just laughed, he was only 16 when he played with us [laughs].

So the band kind of peaked in summer of '98 or so?

Yeah, we played a string of 12 dates with Dave Matthews in very big places. If I ever got a taste of what it was like to be a big band, that was it. We played Vernon Downs [in New York]. Some of those gigs were first-come first-served, so they were all there for the opener.

The catch with us: To make a record RCA would put out, we ended up making something a little more rock and commercial than what our true native sound was. That was part of the game with a big record deal. Some of that stuff I listen back and think it's OK, then other songs just don't work at all. It didn't capture what we did best. But yeah, we do have some crossover DMB fans. But to really take that next step in that world, you need the big hit.

In the early 2000s, you guys gradually went dormant and you totally changed careers. What happened there?

I think there was this big letdown that we didn't break through and become a huge success. Coran gave us some awesome opportunities. I think at that age, dealing with that adversity, speaking for myself, I was too immature to handle it. It brought me down and I had to go through an adjustment period. We were so passionate in our late 20s, our enthusiasm was 100 percent. There was a lot of soul searching, figuring things out. People were getting married, children started happening. Enthusiasm waned.

By 2002, we were really starting to stop. I was doing Meals on Wheels down at Massey Cancer Center at MCV, taking stock of things. Then I delved back into guitar more, playing more classical. … Sometimes I feel a little like Kenny Powers from "Eastbound and Down" [laughs] — I was basically substitute teaching in Chesterfield after the band broke up. But I started playing with my brother again, as the Winn Brothers, around 2004. He was up in D.C. and knew some very social people, and we would play their parties. Just a cover band for fun, but we got some traction in Georgetown, playing weddings for these people.

At 35, I was teaching music at Episcopal High School, and I said, "You know, science is a part of my brain I haven't used." So I went over to Georgetown and took the required courses to apply to medical school. Basically for the next 10 years I was either doing med school or residency. I just finished this past July when I saw you, and now I work as an anesthesiologist at the Carilion [Memorial Hospital] in Roanoke. I'll be in high demand on tour [laughs]. No, what's nice about anesthesia, when I leave the hospital I'm not getting paged all the time. You know, my dad was an obstetrician in Roanoke, he delivered so many babies. He was getting called all the time. Doesn't happen to me.

So Agents got back together when a friend of yours died. And immediately the crowds were there. Did you find the old spark right away?

Yeah, he was a great friend of ours when we were young, a voice of reason.

I think a lot of people showed up in groups to shows, saying "Hey, I used to see you guys at ODU with my buddies," or whatever. I didn't feel like anything was missing. Now it feels great, natural. We play a little slower which I think is probably good, we were too hyped up when we young, couldn't groove as well together. I've really fallen in love with music again, singing, writing tunes.

We're just booking gigs ourselves, playing places where we have a relationship. We're definitely going to get in the studio and record some music, put it on the Internet. We've got tons of songs, digging up some old stuff, rehashing. I feel like we have a sound that I want to get out there.

Do you have any goals now as a band?

Just to enjoy the moments while we're in them. I'm going to play Baltimore tonight. And I'm not thinking about tomorrow, or the next gig, or selling records. That's the goal: to be in the moment of playing the music and enjoy it for what it is. I think it takes a little more maturity to be in that place.

Now that the babies are out of diapers, you can see the horizon. Sun's coming up and there's more life out there. It's not over, you know?

Who knows, maybe Danny McBride [Kenny Powers] will show up to a gig. He told me he still has a home in Fredericksburg, and I know he showed up at a Big Payback gig once.

Dude, I would bust out frickin' that song that opens up the show: Freddie King's "Goin Down"? When that piano on the right hand starts slamming those chords? Oh my god … Stevie. Ashley Schaeffer too [cracks up]. I've actually been listening to a lot of Jerry Reed lately.