A non-traditional love triangle, “Both Sides of the Blade” is a return to form for French auteur Claire Denis. 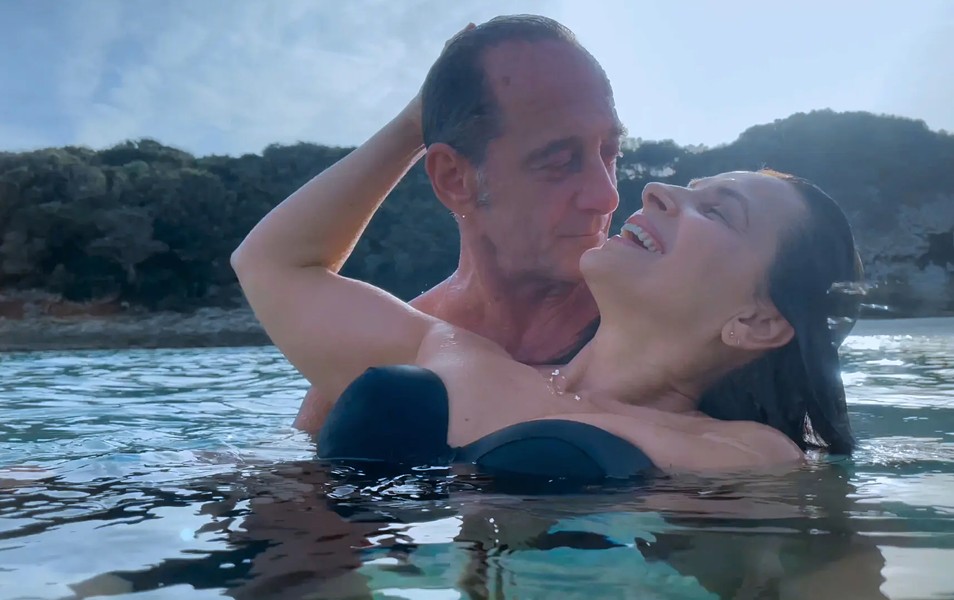 Though I love many Claire Denis movies, it occurred to me while watching “Both Sides of the Blade” that I don’t remember them specifically.

I can barely tell you what “Trouble Every Day,” “35 Shots of Rum,” “Bastards,” and “Let the Sunshine In” are about in a narrative sense. However, I can recall images, performances, and an ecstatic tone in which despair and rapture are heightened, conjoined, and imbued with ordinary realistic qualities all at once.

Music and movies are often connected by writers in hackneyed fashions, but Denis’ movies linger in the mind like albums. These films are far more pleasant to remember than the logjams of plot that govern most Hollywood product. When Denis is on her game, you feel cinema stretching beyond the rigid dictates of formula plotting, communicating subterranean feelings. When she’s off her game—as in “High Life”—the sense of self-importance is ludicrous. That’s the risk of not playing by the usual rules. Good news: “Both Sides of the Blade” is a return to form.

Denis’ typical approach is to take a well-worn genre, hollow out many but not all of its narrative traditions, and replace those with atmospheric surveys of people and places. If you’ve never seen a Denis movie, this description may sound impossibly boring, but she honors the primordial intensity of genre-movie pleasures. “Both Sides of the Blade” is a romantic melodrama, a non-traditional story of a love triangle, and Denis doesn’t stint on the harlequin grandeur of such a set-up. What she does, in fact, is heighten that grandeur by grounding an old-hat premise in a recognizable world.

The opening scene embodies Denis’ sensibility in a matter of seconds. Jean (Vincent Lindon) holds Sara (Juliette Binoche) in the ocean. They kiss and caress, enjoying an idyll. Beachside getaways are not unusual in romantic movies, but Denis and cinematographer Eric Gautier emphasize atypical textures: the sun shining into the ocean, the waves and the rays of light connecting to visually suggest that Jean and Sara are engulfed in electricity. The score by Stuart Staples is passionate and melancholic. In Jean and Sara’s lined faces we sense hard-earned pleasure. These are beautiful people, but they aren’t the pretty young things of contemporary romances. Their faces speak of life lived, some of it probably in extremis. Denis, a poet of faces, understands that it’s this sense of experience that renders Jean and Sara and Lindon and Binoche so ferociously, well, tangible.

It was this sense of tangibility—of a real woman in a real place with a real problem—that made “Let the Sunshine In” so goddamn sexy, even if it was about romantic dislocation. That movie had some uncomfortably insightful sex scenes, concerning the potential miscommunication of sex rather than trading in porno fantasies. “Both Sides of the Blade” has a similar sequence, in which a man wants to do something in bed that a woman doesn’t want to do, but this microscopic scrutiny of detail is generally aimed at the domestic routines that keep a relationship percolating. Jean and Sara return to Paris from their vacation and are re-enmeshed into their gestating resentments and differences.

Sara hosts a radio show, which has been discussing critical race theory lately, while Jean is an ex-con and ex-rugby player looking to return to sports recruitment, with a partner, Francois (Grégoire Colin), who is Sara’s ex. It is never broached in the film exactly, but we’re allowed to assume that Sara is a prosperous left-wing intellectual, while Jean is a working-class guy who may chafe at her politics.

Jean has a biracial teenage son, Marcus (Issa Perica), and he tells the boy not to define himself according to discourses concerning race and class but to take responsibility for his own actions. The scenes at the radio station and between Jean and Marcus, respectively, do not serve an immediate narrative purpose. Collectively, though, they allude to a potentially pivotal difference between Jean and Sara, as Jean tells Marcus that Sara’s presumed ideology is condescending and pat. Meanwhile, Francois, who appears to be Jean’s boss, has a cosmopolitan air about him that seems to complement Sara more than Jean does. Perhaps Sara and Jean’s differences, initially a source of spark, are after nine years becoming just that … differences.

These resonances are implicit, save for Jean’s talk with Marcus, and this awareness of unspoken experience creates an internal tension that’s characteristic of Denis’ movies. Unconventional ellipses magnify that tension: For instance, Jean and Francois are rarely if ever onscreen together, and the routines of their friendship and collaboration come to hang over the film, unknown. As Sara drifts into Francois’ life, widening the cracks in her relationship with Jean, “Both Sides of the Blade” becomes a relentless, escalating collection of duets between Sara and Jean and Sara and Francois. It’s as if the men are batting her back and forth like a tennis ball, their motivations obscured by their hunger. Sara’s consciousness is Denis’ master concern here, and she honors the character’s limitations of vision, conveying Sara’s agony as well as her internal contradictions.

Sara is not sentimentalized, as Denis understands that romantic turmoil can make anyone into a desperate manipulator. Sara cheats on Jean with Francois while deflating Jean’s accusations with a self-righteousness that suggests that she actually believes her proclamations of innocence. Sara can be unbearably smug, while Francois is an abstract schemer. Even though Sara’s consciousness is the film’s true subject, the sensibility teetering on both sides of the blade, if you will, it's Jean who will probably command many, particularly male viewers’ empathy. Jean is the odd and routinely emasculated man out in this film, and Lindon’s poignant and volatile performance suggests a ballad of all the ways insecure men can be driven mad in a relationship.

A lot of these associations come to the fore in retrospect, once “Both Sides of the Blade” is over. The ellipses and unsaid thoughts give the film a dreamy quality that’s counterweighted by an aesthetic so tactile it’s hallucinatory. Denis and Gautier home in the actors’ faces and utilize traveling sequences to establish liminal spaces. Much of this film is concerned with people in cars, subways, and office buildings, and all have partitions that divide bits of life into more bits. Paris becomes a maze of bridges and roads and buildings—arteries that exert unnoticed dominion over their inhabitants, informing their states of being.

As the film floats by, it seems intangible—an album or a dream. But the emotions it conjures linger after the particulars of Sara, Jean, and Francois are lost in the maelstrom of real life.

“Both Sides of the Blade” is playing at Movieland.