“The Minotaur,” a new shadow play, brings Indonesian and Western cultures together in beautiful harmony at the Firehouse Theatre.

Indonesian-American fusion band Rumput, based in Richmond, got a grant from the University of Richmond that led to an international project that will culminate in the world premiere of an original shadow play, "The Minotaur," at the Firehouse Theatre.

Shadow plays might be one of the most accessible theatrical artforms in the world. All you need is a light and something that casts a shadow.

“One of the best light sources for a shadow is the light on your cell phone, because it's a single, really bright LED and it casts really, really nice shadows,” says Andy McGraw, associate professor of music at the University of Richmond and a member of Rumput, Richmond’s favorite Indonesian-American fusion band. Those who’ve seen Rumput perform live have likely been treated to a shadow play or two.

“Shadow theater pretty much exists in some form in every culture, but Indonesia has one of the deepest shadow theater traditions in the world. They've taken real extremes, especially on the islands of Bali and Java,” McGraw explains. Even today, traditional Indonesian shadow plays are an important and relevant part of the culture used to communicate everything from traditional religious texts to politics and social critiques.

So when Rumput received a grant from the University of Richmond Center for Civic Engagement to develop a collaborative, cross-cultural, community engagement experience, the group wanted to work with other artists, locally and internationally, to create an original shadow play. It sought the help of Indonesian musicians, artists, and composers, all working remotely and on different time zones throughout the project, and local playwright Chandler Hubbard was brought on to write the script.

Hubbard wanted to find a story that might transcend cultural norms and speak to a universal audience, which made him think of mythology, the stories humans have retold for millennia. When he eventually landed on the Greek myth of the Minotaur, the monstrous half-man, half-bull, caged apart from society in a dark labyrinth and eventually slain by the “hero” Theseus, Hubbard says he wanted to find ways to subvert that myth. 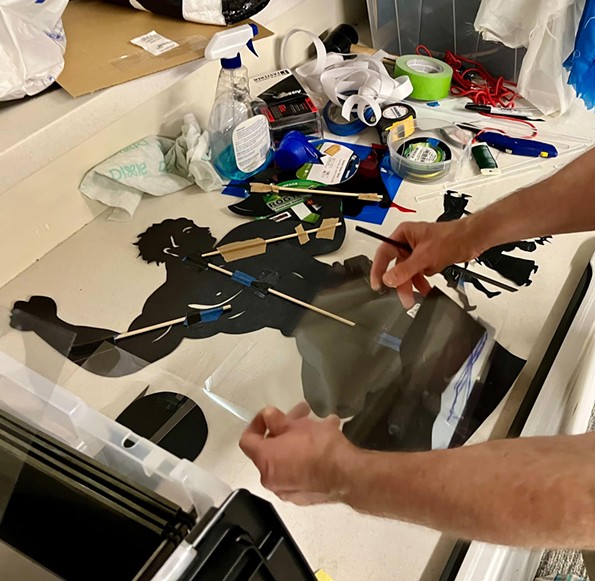 “I wanted to find a new way to approach this idea of monstrosity, the idea of the other. Someone who, through no fault of their own, is turned into a monster, who is deliberately put in isolation and what that does to someone,” Hubbard says, adding that he’s interested in locating the universal in the myth; the themes and ideas that could be conveyed through imagery, movement, light and sound.

Hubbard worked with the restrictions by trying to distill the myth into universal symbols and recognizable archetypes. “It's really about finding the iconography and what exists in a ubiquitous sense, the themes that reach people regardless of culture, regardless of space, and finding out what really sticks out to people in that regard.”

The development of that iconography -the puppets, backgrounds, set pieces and other design elements- has been a collaboration with Yuda Putra, a young Balinese musician whose designs infuse the Greek myth with imagery inspired by Balinese myth.

Original music was composed by Indonesian teacher, Danis Sugiyanto, collaborating remotely from Java. In an emailed translation done by McGraw, Sugiyanto says that this process required the innovation and creativity of the performers and artists who worked together, and some research and cross-cultural learning on his part, as a composer. He wasn’t familiar with the Minotaur myth before this project and he says he wanted to incorporate musical elements from Western cultures that shaped the story into his original composition. “These are different traditions, but the essence of each is maintained,” he says. “I think in combination this results in a new kind of intercultural aesthetic.”

The music for “The Minotaur” is actually even more expansive than Rumput might normally be. Sugiyanto’s score combines kroncong with electric guitar, and percussionists will provide sound effects, using their instruments in a variety of nontraditional ways and in nontraditional, culture-blending combinations.

“In the end I think I demonstrated that this traditional music from Indonesia (with obvious western antecedents) is capable of expressing a wide range of emotions and accompanying foreign dramatic and visual elements,” Sugiyanto says.

In addition to “The Minotaur,” audiences will experience a few shorter pieces with stories told through traditional Javanese scrolls, which are backlit against the screen and unrolled to reveal sequential images.

“While they're in this traditional genre, they’re about things like economic refugees, climate change -very topical issues, but kind of within this traditional form, and there's new music accompanying that, as well,” McGraw says.

As part of the community outreach portion of the event, there will also be a free workshop at 3 p.m. the day of the performances which is open to the public (masked and vaxxed) of all ages. At the workshop, shadow puppeteer Edward Breitner will introduce attendees to the artform, looking at how the puppets are made, but also exploring how they can move and how to make them come alive to tell a story.

“What's so cool about them is that there's just a very obvious life to it because it's connected to a human being. That's even true with these puppets that we're going to use, which are just paper cutouts,” Breitner says. “As soon as there's a human hand holding the stick, it's just very clear that it is alive. It's very fun for anybody to just hold on to that stick and watch it, you know, become a part of your life.”

“The Minotaur,” a world-premiere shadow puppet play, runs at 5:30 and 7:30 p.m. on Saturday, April 2nd, at Firehouse Theatre, with a free shadow theater workshop from 3 - 4 p.m. Tickets to the performances cost $5. www.firehousetheatre.org.