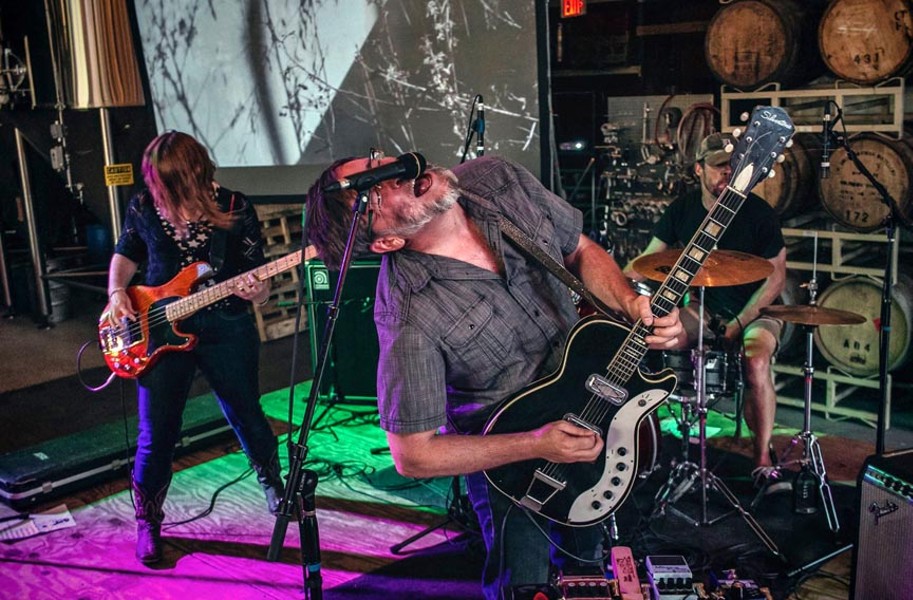 Michael Harl of Manzara unleashes a vocal torrent during a Hardywood Park Craft Brewery show, backed by Erin Housholder on bass and Mark Hutcherson on drums.

Usually a Manzara song opens with drums and bass setting the scene.

Manzara is a trio of guitarist and vocalist Michael Harl, drummer Mark Hutcherson and bassist Erin Housholder, making music that’s equal parts unpredictable and intoxicating. The intense sound could be compared to kraut, psych or even metal — but defying easy categorization is what most excites the group.

“Our influences are all over the place,” Harl says. “As a result, you get this sort of smorgasbord of sound that hopefully displays the personality of the band.”

The song “Kentucky Meat Shower” is a prime example.

It begins with engaged drums and hypnotizing, spiraling bass lines. As Harl enters, the tone shifts to dissonant, spacey guitars and howling vocals. A kind of darkness flows throughout the song, but talk to the band’s members and you’ll discover that they love to play with humorous juxtapositions. The song takes its name from a real-life incident involving meat falling from the skies in Bath County, Kentucky, in 1876. It’s a story Harl enjoys confirming to be true as often as he can.

“I like the idea of writing funny, absurd lyrics for these really heavy, dark songs,” he says. Other examples of titles include “When Pants Attack” and “Dankee Peepaw.”

During a recent weekend spent recording in Mechanicsville with engineer Tim Falen at Virginia Moonwalker, the band didn’t even want to use guitars.

That might sound like a limitation. But Manzara uses absence as an opportunity to highlight Harl’s distinct vocal approach while discovering opportunities for the rhythm section to create space. It’s a key formula of what makes a Manzara song work: Harl frees himself by presenting his instrument through a different lens.

“Michael might attempt to write a bit more succinctly and to the point, where Erin and I might like to float around an idea for a while to see how much tension we can develop with a given part,” Hutcherson says.

“I can’t remember which song we were working on, but there was this point where it felt like we hit a dead end,” Harl recalls. “And Erin took a moment and reassured everyone that the great thing about this process was that there were no rules. I had never thought of it like that and it has informed the band’s approach since the beginning.”

Manzara hopes to release an EP of the material recorded with Falen in Mechanicsville by the end of the year. Despite the group’s songs being in rotation for a while, the band is confident everyone will have something new to take away from the release, including its members.

“We were quick to notice what things work better for us in a live setting as opposed to a recording setting,” Harl says. “It’ll help us gauge how weird we can make things, but have a better control over it in the long term.”