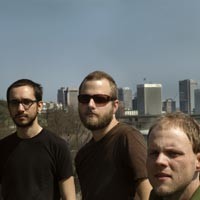 Those who have been waiting patiently for new music from iLad will be rewarded handsomely this fall. “Here There,” recorded and mixed by Lance Koehler at Minimum Wage Recording, is a double album packed with 24 tracks of jazzy, psychedelic pop.

Even though half of the Pink Razors have moved to the Midwest (Erin Tobey and Jeff Grant), the band will remain as active as possible. The band will self-release a new full-length album of punk ditties in the fall, “Leave Alive,” (released on its own label, Houseplant Records) hopefully in time for a set at the Fest 7 in Gainesville, Fla. Also, Erin has a new keyboard-based track, “Leed's Lament,” on the Plan-It-X Records compilation.

The first release from Sweat Lodge has seen the light thanks to local label Perpetual Motion Machine. With a lineup of current and former members from Wow, Owls!, the Assistant, Tigershark, Brainworms, and Stop It!, you might expect a heavy, all-over-the-place Richmond sound. So the lyrics about the woods, desert fauna, vision quests and the end of the world may come as a nice surprise. The six-song demo was recorded and mixed at the Bike Lot by JK of Jeeb Vision and Sound.

JK recorded his new band Caves, Caverns — in his dining room no less. The three-piece band formed in the spring while hanging out on tour with Human Smoke and it has played a handful of shows since. The progged-out surf-metal on its “Subterranean River” CD is rooted in the alien sounds of a theremin. The band will tweak it to maximum effect Oct. 27 at Gallery5.

When they get day passes from their other bands, guitarist and vocalist Jeremy Flax of Dirty Blood and bassist Evan Hume of the Norman Rockwells team with drummer Dan Hanyok as the Vermilions. Taking cues from bluesy garage bands such as MC5 and the White Stripes, the Vermilions nailed down six tunes at Detached Sound for a new EP.

Even though the Pretenders have released a new album, the music that earned them a spot in the Rock and Roll Hall of Fame is still getting covered here in Richmond. After recording her own version of “Kid,” Hot Lava's Allison Apperson decided to put together the (Pretend) Pretenders. The band includes Hot Lava bassist Andrew Mowe, Hot Lava drummer Jared Sosa (ex-member of a Roman Holiday) on guitar and Herschel Stratego on drums. The Pretend Pretenders will step into new personas at WRIR's Monster Mashquerade benefit, Oct. 24 at the New York Deli.

Sosa is also slated to produce Herschel's debut solo record, “Be Honest,” being recorded (honestly) in WRIR's bathroom. Will Armstrong (Hamburger James) supplies upright bass on a few songs, but our guess is he won't try fitting it into the recording space. — Compiled by Mike Rutz of “Activate” on 97.3 and Jay Smack of “Studio B” on 102.1