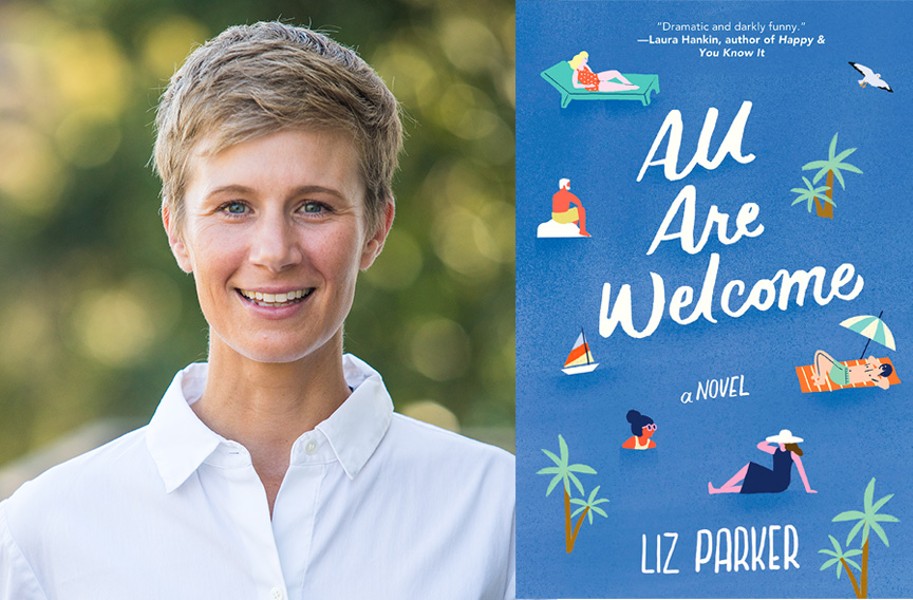 How can parents surmise that their child has literary chops?

Liz Parker is a Los Angeles-based literary agent with deep family connections to Richmond. She reminisced recently about how delighted she was when, as a senior in high school, her folks, Virginia “Ginny” Reynolds Parker and Michael Parker, drove three hours from their home in Greenwich, Connecticut, to see her receive first-place honors in a short story contest at Deerfield Academy, her boarding school in western Massachusetts.

This month, some 18 years after that recognition, the Parkers, who now live in the West End of Richmond, Ginny Parker’s hometown, have witnessed publication of their daughter’s first novel, “All Are Welcome” by Lake Union Publishing in Seattle. It’s a lesbian romantic comedy about a small, offshore destination wedding that was inspired in part by the author’s own nuptials in 2017.

The book’s protagonist, Tiny McAllister, is marrying Caroline Schell, whom she has known and admired for most of her life. Their respective families are close friends as well as neighbors in swish Greenwich. The setting for the weekend wedding is in Bermuda at the 26-acre, cliff-top Coral Beach Club. In contrast to the attractive, well-adjusted brides, the book’s entwined cast of characters includes two sets of parents, siblings seen and unseen, a very few close friends and even an unexpected old fling. It’s a dysfunctional lot, for sure. All is not bucolic: And expect a major Atlantic storm.

However, the plot is not a socio-comedic romp about marrying outside of one’s class. Well, not exactly.

“A lot of what is written about WASPs is written from the outside looking in,” says Liz Parker by phone from the home she shares with her wife, Sarah Tallman, a product development consultant for the cosmetics industry, and their pups Beep, a Yorkie, and Tiny, a Jack Russell terrier mix. Their house in Beachwood Canyon is nestled “under the Y of the Hollywood sign,” as Parker puts it. “I come from a long line of WASPs and while my own family is not like the McAllisters, there is inevitable humor in challenging the status quo. I wanted to write a book that featured gay characters who weren’t coming out – it was the characters around them who were still struggling.”

But she also thinks there is “a spectrum of acceptance and growth that comes from a family’s first gay child” and she wanted to shine a light on that process, “a process that is challenging, at times frustrating, and often very funny,” she says.

Indeed, “All Are Welcome” is a knowingly detailed and insightful, sometimes dark, highly efficient and ultimately hopeful story of redemption. With social wrangling, drug and alcohol dependency, denial and insecurity, passive aggressiveness, and insincerity rampant among the two families, Parker slyly injects sharp observations about the tribal ways of white, Anglo-Saxon Protestants (the McAllisters are Presbyterians).

Her pronouncements would probably be endorsed by writer Lisa Birnbach whose “The Official Preppy Handbook,” a savvy primer on WASP culture, is still prescient many decades after its 1980 publication. Birnbach’s first rule of preppy values is consistency. She wrote: “[Consistency] is the preppy euphemism for sameness. Generation after generation will dress, dine, walk, talk, decorate, vacation, work, get educated, get married, and name babies all the same way.”

One can almost visualize author Parker chuckling as she composed descriptions of such proclivities, or having her book’s characters spew such aphorisms as:

“Female WASPs liked to gather for meals, but they don’t like to eat.”

“WASPs loved to invite guests to their country house and offer directions only after they’ve arrived.”

“You don’t invite a group of people down to an island for a wedding and not offer golf. It’s just not done.”

“WASPs and their booze. There was no other culture on the planet so simultaneously dependent on drink and having others drink with them. For these people tragedy was drinking alone.”

If Liz Parker cleverly channels the milieu of which she writes, consider that she is a scion of one of Virginia’s most accomplished and intriguing families in modern times.

Her great-great-grandfather, Richard S. Reynolds, in 1919 founded the company that evolved into Reynolds Metals Co. in 1928. It manufactured aluminum foil for packaging tobacco products and he later invented Reynolds Wrap and other household products as well as aluminum and plastic products for construction, aviation and the automotive industries. [Note: For deeper history on the family, read this link from Virginia Tech about the Reynolds Homestead and Hardin Reynolds, "a successful farmer and tobacco manufacturer who built Rock Spring, used enslaved labor on his plantation until 1865, building a foundation of great wealth for his family"].

Richard S. Reynolds moved the company headquarters to Richmond in 1938. President Harry S Truman lauded him on numerous occasions for his patriotic and industrial activities during World War II.

His son, Richard S. Reynolds Jr., became president of the company in 1947. He oversaw the introduction of aluminum beverage cans and was a trailblazer in major recycling initiatives. There was also Eskimo Pie as well as international expansion. He had the handsome corporate headquarters built on West Broad Street: The international style complex was the region’s first suburban office park, now home to Altria. Prominent in Democratic politics nationally, Reynolds was a major player in Lyndon Johnson’s 1964 presidential campaign. His wife, Virginia Sargeant Reynolds, was the family matriarch when she died in 2014 at age 99. Liz Parker says that she has fond memories of watching her brother, Michael, engage their mercurial great-grandmother, whom they addressed as GaGa, playing Slap Jack at her condo in the Tuckahoe, which overlooks the Country Club of Virginia. He would slap the grande dame’s hands, which she found hilarious. So much for WASPish aversion to physical touch. 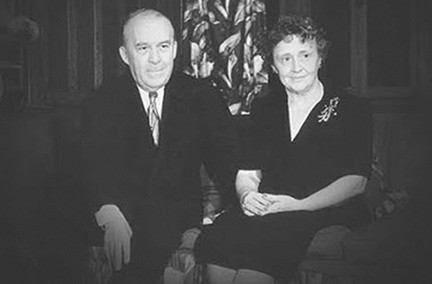 Parker’s grandfather was J. Sargeant “Sarge” Reynolds (1936-1971), who was an officer in the family business, taught at University of Richmond, and was elected Virginia’s lieutenant governor in 1971 after serving in the House of Delegates and state Senate. The Washington Post described the racially progressive Richmonder as “one of the most popular politicians ever to hit Virginia.” When he died of inoperable brain cancer at age 34, he was given the rare honor of a state funeral. Because of his efforts in developing the community college system, J. Sargeant Reynolds Community College was named in his memory. Says Parker: “He packed a lot in. My brother and I knew him through stories and I did an oral history on Sarge when I was 13. He continues to live on in the family.”

Alcoa acquired Reynolds Metals in 2000 in a deal worth $4.5 billion, according to the Wall Street Journal, to create the world’s largest aluminum company.

Today, the Richmond Ballet is housed in a former Reynolds plant downtown at Canal and South Fifth streets that was given to the troupe by the Reynolds. The family continues to be civic and cultural leaders. Liz Parker’s great-uncle, Richard S. “Major” Reynolds III, also served in the House of Delegates and his wife, Pamela Reynolds, is a fine arts advocate statewide who spearheaded fundraising for the McGlothlin Wing of the Virginia Museum of Fine Arts. 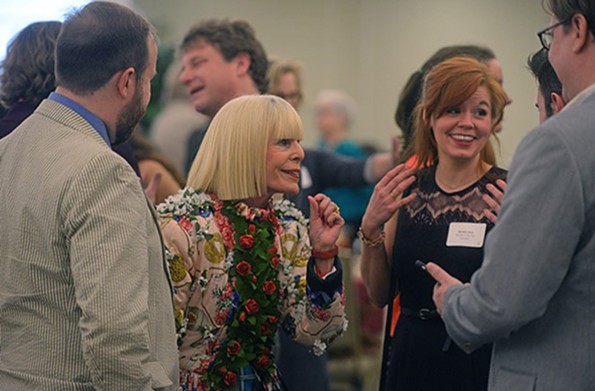 Parker, who was reared in Greenwich, enjoyed multiple visits in Richmond.

“My brother and I were shipped down for spring break for a week for a decade,” she recalls. They stayed with their maternal grandmother, “Bitsy” and late step-grandfather, Alexander “Alec” Hamilton IV who lived near the Huguenot Bridge.

“We’d go to the nearby campus of the University of Richmond and attend Richmond Braves [baseball], or Renegades [ice hockey] games at the Coliseum. We always saw Richmond as an extension of ourselves.” Their parents, Ginny Reynolds Parker and Michael Parker, recently moved to Richmond from Connecticut, “a home-coming in a way.”

After graduating from Deerfield, Liz Parker attended Middlebury College in Vermont, her father’s alma mater, where she majored in English and creative writing.

“There wasn’t anything precious about it,” she says. “I was always a bookworm. I was also interested in magazines and books although I didn’t know anything about how they were produced. I just knew they existed.”

She says she came out as gay while a sophomore in college.

“But I wasn’t going to burn the house down [with the revelation]. I would have been out in the third grade but that wasn’t an option. I didn’t know what it was.” 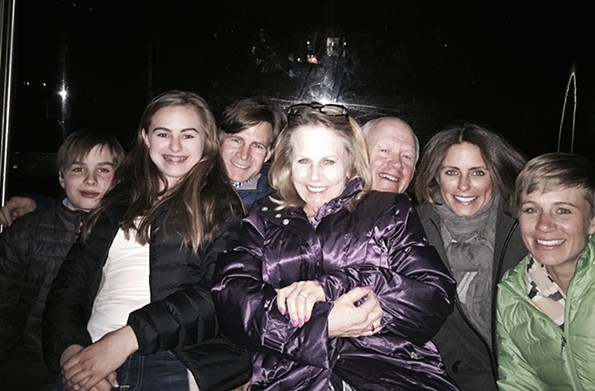 Rather than hold summer internships in either journalism or publishing, she was a camp counselor in the Grand Tetons. It was in her senior year in college that a classmate’s father suggested she explore publishing as a career. The 45 application letters she mailed out garnered but a single response with an underwhelming offer. Her father asked, “Why don’t you go into finance, go into something that is real?” But a week before graduating from college, she was told of an opening at Penguin Publishing.

“God, fate and luck,” she says. Talk about Presbyterian predestination. At Penguin she worked on many facets of publishing and is currently head of publishing and a literary agent with Verve Talent & Literary.

More recently, Parker says, “I knew I wanted to write a book. … It’s fascinating, going from agent to author has added so much to my compassion meter.”

As to her process in developing her book “All Are Welcome,” she says that a story “marinates in my mind and I’m a runner. When I feel that a scene has played out after a run, I write it down.”

In the book, the world is changing at an uncomfortable speed for the McAllisters. In addition to familial storms, there is an actual squall. But Parker remains an optimist. For relaxation, or perhaps a guilty pleasure, she enjoys what she calls “end of the world” movies.

“I don’t watch them for the action or because a tsunami is going to occur, or a meteor is going to hit the earth.” She watches because: “They always find the answer.”