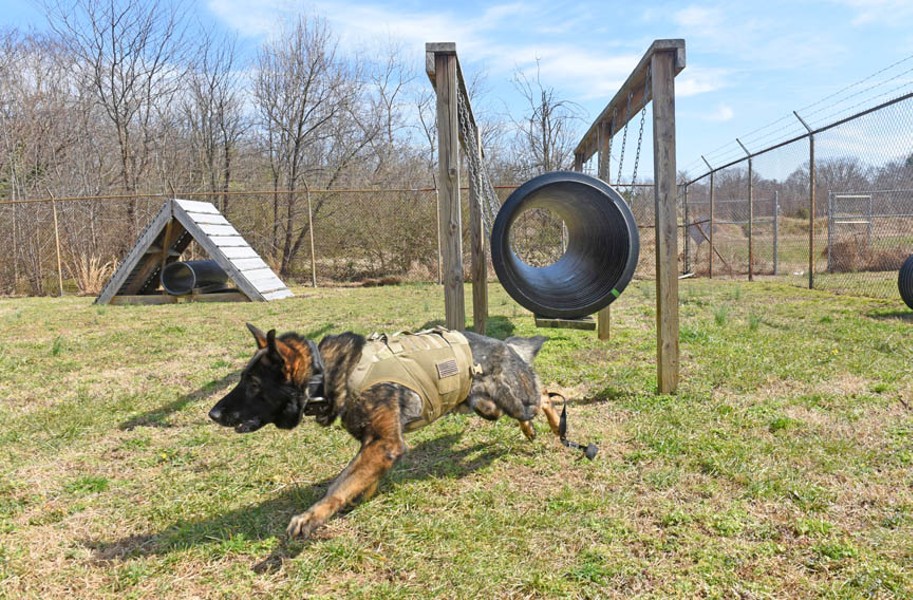 Scott Elmquist A German shepherd named Phantom takes on the obstacle course at a new K-9 training center in the North Side.

Inside a fenced-in compound filled with obstacles, Phantom, a dark brown German shepherd wearing an olive drab, military-style harness, is running through his paces.

Richmond police officer Montague Agee directs Phantom on a leash, and then by voice command. The dog flies over and through obstacles made to look like housing roofs, fences and drainage pipes into which criminal suspects might crawl to hide.

The head of the city’s K-9 unit, Sgt. Mike Bohannon, is watching the action. And he’s doggone pleased — with not only the animal and his controller, but also the new facility, which opened Jan. 14.

The $1.6 million training center in the North Side is a reality because of the support from the nonprofit Friends of Richmond K-9s and the Boy Scouts. Friends lobbied City Council to get $235,000 in design funds for the project, which first was proposed in 2013, says Jeff Merten, head of the Friends group.

The new center replaces a 1950s wood and cinder block building that was cruddy with mold. All of the dogs were kept in outside kennels where they suffered on humid summer nights. “It is so much better than the old one,” Bohannon says.

Richmond police have 12 dog teams that are divided up according to various missions, such as patrolling, searching for people or sniffing out drugs and other evidence. Another team is trained to find hidden explosives. It’s seconded locally to the U.S. Department of Homeland Security.

Most of the dogs involved are shepherds, rounded out by a bloodhound and some Belgian Malinois. Most are purchased from professional breeders in Europe, especially the Czech Republic. Patrol dog candidates cost from $6,000 to $8,000, and drug dogs go for between $4,000 and $6,000.

Generally, males are preferred for patrol work and females for drug detection. Shepherds dominate because of their smarts, strength and even tempers. Also popular are Malinois, which Bohannon calls “Mallies.” They’re like shepherds but have shorter hair and are well suited for summer work. One famous Mallie is a dog named Cairo, who flew in with a Navy SEAL team that in 2011 killed terrorist leader Osama Bin Laden in Pakistan.

All dogs and handlers must go through a 14-week basic training course that runs 9 a.m. to 5 p.m., Mondays through Fridays. “A dog can’t just give up in the eighth week,” Bohannon says. If the dog doesn’t show promise after having some learning troubles, it will be dismissed or sent back to the beginning of the course.

But those who fail completely are shipped back to Europe under a money-back guarantee. “That’s why we don’t take dogs from amateur breeders,” Bohannon says.

The most important lesson the dogs learn is to bond with their trainers, who will work with them day in and day out. “It’s a gradual, block-by-block program,” he says. “Eventually, the dogs make the correct associations and learn what to do.”

What motivates their behavior is the love of their toys and their masters. The dogs typically go home with their handlers when off duty, but cannot become family pets — although they often do when they retire after about eight years of service. “It’s not a pet,” patrolman Sammy Hernandez reiterates at a training session.

The new training center offers indoor and outdoor kennels, washrooms, equipment rooms and training rooms with computer work places for officers. Some kennels are connected between indoors and out. Those that are entirely outside have misting fans, provided by the Friends group, to keep dogs cool during hot summer nights.

A variety of police departments in the state use the center too. On a recent day, dog teams from Hopewell and Henrico County are going through their paces. In an indoor kennel, a female shepherd named Mary, from Caroline County, waits for her turn.

Merten, who heads Doody Calls, a dog waste pickup business, says the idea for the new center came about four or five years ago when he met Bohannon at meeting. They hatched a plan to form a nonprofit that would assist the unit with funding and support.

A key moment came when Samantha Strange, the 12-year-old daughter of Jody Strange, another Friends official, addressed City Council about the need for a new facility. Her poignant comments won over officials and they came up with design money.

The bulk of the funding came from grants organized by former attorney general Kenneth Cuccinelli, who won a settlement from the federal government in a lawsuit over Medicaid. Friends bought extra equipment such as bulky bite suits and special doghouses that retain heat in the winter. The Scouts built the obstacles under police direction.

Friends hopes to keep up the pace. The group plans a 5-kilometer foot race in Byrd Park on Saturday morning, April 2, to raise money for the unit. (Registration ends March 31.)

Today, the facility is busy. Patrolman Fred Bates puts working dog Sunny through his paces. The dogs may seem threatening, but he says biting “is the last thing we want to have them do.”

The loving dog-master bond is what sustains the unit. Next to the new facility is a memorial to deceased working dogs that have served the city since 1957. There are 105 names on it, including Fred, Dirk and Raysa. S