Richmond Triangle Players' “Take Me Out” is a grand slam. 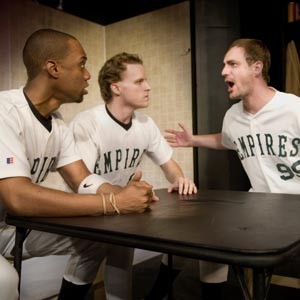 Scott Wichmann is a fantastic actor, an avid baseball fan and a truly positive nurturing person. This makes him the perfect director to turn the Tony Award-winning “Take Me Out” into a home run of production.

“Take Me Out” is a beautifully written (2003 Pulitzer nomination for drama) homage to baseball and the human drama that plays out through the sport. The story is as loaded with issues to chew on as a pitcher's cheek.

Darren Lemming (flawlessly played by Ronnie Brown) is a smart, charming, record-breaking ball player who comes out of the closet at the height of his career. In contrast to Lemming is Jimmy Glidden's creepy Shane Mungitt, a backwoods bigot whose only gift is a golden arm. Matt Hackman's approachable Kippy is the glue that tries to hold the team together while issues of masculinity, class, religion and race are addressed. Most of the action takes place in the team locker room — the only place where the players can be their true selves.

This Richmond Triangle Players show has Wichmann's stamp of excellence all over it. He directs like he acts: perfect timing, real emotion and a love for the craft. The exceptionally talented cast has been blocked, dressed and rehearsed to perfection. The locker room set serves the play and action nicely and is outfitted with functioning plumbing under which several of the characters take actual showers (although soapless for safety reasons) in the buff.

The only flaws of the show are minor: Hackman's inordinate volume and that Eddie Tavares looks nothing like the Japanese character he deftly portrays. Other than that, this late-comer bats a thousand as one of the top shows of the season. S

“Take Me Out” runs on selected dates through May 29 at the Richmond Triangle Players, 1300 Altamont Ave.  For information call 346-8113 or visit richmondtriangleplayers.com.