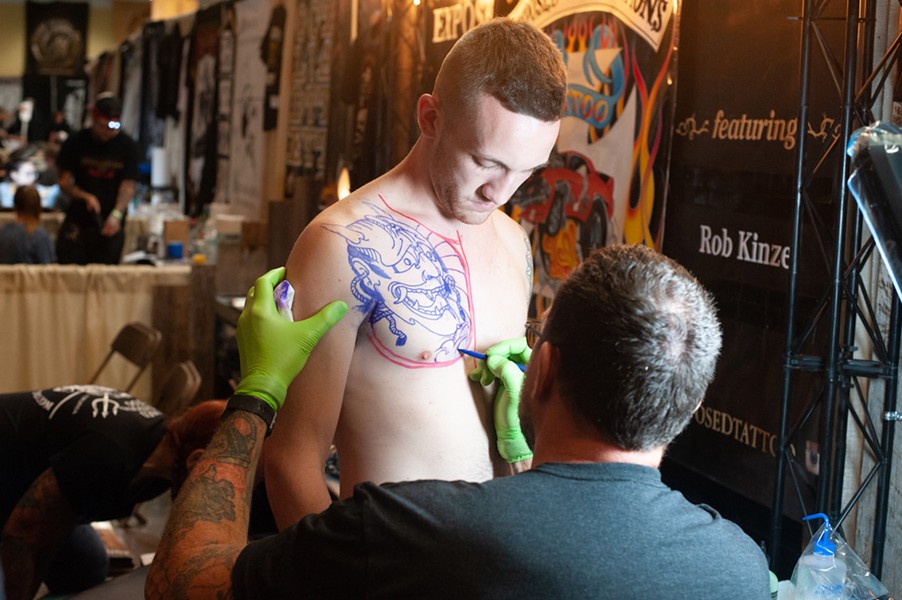 Not only is the Richmond Tattoo, Art and Music Festival returning after a two-year hiatus, the weekend-long event will also feature Black Ink’s Melody Mitchell, the convention’s first Black female headliner.

A life-long practitioner of drawing and painting, Mitchell was in high school when she saw a magazine featuring Mr. Cartoon, aka Mark Machado, a tattoo and graffiti artists based in Los Angeles. The article made her realize she wanted to learn to tattoo. Despite being a Black woman entering a white male-dominated field, Mitchell had no qualms. “Being from Florida, I learned from some Puerto Rican guys and they were taught by their mom, so I guess that was a softer entry into the game,” she says, laughing. “I definitely felt like an outsider at the time, but it never deterred me. I was very committed and confident from the get-go.” 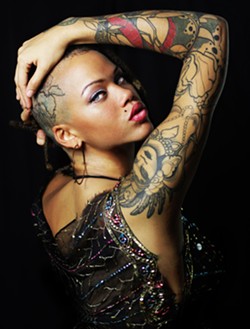 Mitchell is known for her creative color approach on all skin tones, as well as her nature themes with underlying tones of mysticism. She doesn’t find tattooing Black and brown skin challenging, just different. It’s also one of her specialties.

“Under the umbrella of brown and Black skin, there are hundreds of shades, so it really is an individual approach each time,” she explains. “A true artist can work with the canvas they are given to create something beautiful. There are very few people in this world who I’d say shouldn't waste their time getting color ink and all the brown and Black shades outside of that small, glorious group have different combinations that work for them.”

Although Mitchell lives in Colombia, most of her tattooing takes place in New York City and Tampa. But she brings her machines everywhere she goes, resulting in her having worked in over a dozen countries. “There's no caging this bird. I love traveling and tattooing because it's such a great way to meet people,” Mitchell says. “Also, I do feel tattooing is sacred, so it feels really special to leave marks of yourself walking all around this world.”

The Richmond Tattoo, Art & Music Festival was conceived back in 1993, but has changed hands three times. Loose Screw tattoo artist Jesse Smith took it over in 2016 with partner Kenny Brown. Both were active within the tattoo and art communities and determined to ensure that the festival was constantly reflecting what’s happening around them. “As the tattoo and art world evolve, so do we,” says Smith. “One of the newer things we’re introducing this year is the NFT [non-fungible token] space. There are tons of amazing artists making their way into the NFT space and I feel like the festival is a great place for them to showcase their talents.”

Smith’s goal is to bring to the festival celebrities that people genuinely want to meet and may not have any other way of doing so other than this festival. Headlining artist Mitchell’s international acclaim was a factor in bringing her to Richmond, but so too were her skill level and personality. “Richmond is a richly diverse city and we wanted to amplify that with the selection of artists attending, including who we chose for a headliner,” Smith says. “She’s talented, hungry, and frankly, just awesome. I think people will be extremely excited for the chance to meet her and/or be tattooed by her.”

Kenny Brown, Smith’s co-host since 2016, passed away recently. It was a sudden and devastating loss for Smith, the festival team, and the national tattoo community. This year's festival will be a memorial for Brown and another tattoo legend gone too soon, Tony Olivas. Festival guests can get flash tattoos to honor Tony and/or Kenny. A separate memorial room at the festival will be set up for artists, friends, family, volunteers, and staff to pause and reflect. Both Brown and Olivas’ tattoo booths will remain vacant in their honor with a guest book for people to sign. 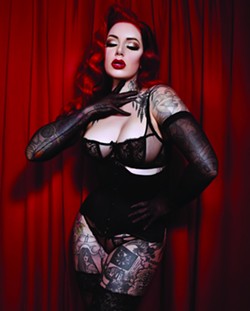 The festival also features a range of musical acts, including southern rockers Damien Lugo and the Halo of the Vultures, burlesque performer Cervena Fox and ska band the Sneaky Heat Missiles, among others. The Giving Arts Foundation will be raising money through live mural painting and exhibitors will display their wares for sale. That part of the event speaks to Mitchell. “I love shopping at tattoo festivals. They have the best merchandise: dope clothes, really cool jewelry, great art prints and books,” she enthuses. “The vendors are probably my favorite part and this one in particular always has amazing food vendors as well.”

And while Mitchell’s not feeling any weight or pressure at breaking new ground in Richmond, she does feel a lot of pride. “I offer my services to all communities equally, as long as respect is reciprocated,” she says. “I'm actually kind of surprised that I'm the first Black headliner. But somebody's gotta do it and I am down!”