The “Jetsons”-like Pulse stop in front of exquisite Hunton Hall should be moved.

That a modernist and incompatible Pulse station was plopped in front of VCU's Hunton Student Center, a nationally-listed historic building at 1110 E. Broad St., is a travesty.

Effect on historic properties? ... Hello. … Hello? … Is anybody there?

With less than a month until the announced June 24 launch of the $65 million Pulse rapid bus system, pedestrians and motorists are coming to grips with new traffic lanes, turn patterns and 28 aggressively modernistic concrete, steel and brick transit stations now set along the 7.6- mile route. With Rocketts Landing and Willow Lawn serving as the bus system’s bookends, these open-air platforms, with dramatic, one size fits all, “Jetsons”-like slanted metal roofs, have altered the cityscape and the appearance of their immediate environs.

At certain points, such as at Cleveland Street in Scott’s Addition, the innocuous stretch of 20th century suburban commercial culture is animated not unattractively by the station’s bombastic design. In fact, since the former warehouse and industrial buildings in Scott’s Addition are so uniformly low-slung and numbingly similar, the Pulse stop offers a welcome shot of architectural adrenalin.

But what works along that aesthetically underwhelming stretch of West Broad is sadly incompatible at a number of other stations being readied downtown. While the in-your-face station design works just fine in front of City Hall, a bold structure that overwhelms everything between Ninth and 10th streets, the Pulse station in front of the Virginia Commonwealth University police station at 224 W. Broad, a former savings and loan building designed in 1964, by Cunneen Co., is an affront to the modest-scaled building with well-detailed white marble and distinctive black glass fenestration.

Similarly unfortunate, at the 12th Street station on the south side of Broad just east of Governor Street, the shelter is plopped smack in front of a Virginia Department of Transportation building. This dignified, recently-restored three-story building in the English renaissance style, was opened as Memorial Hospital in 1900 and would be recognized as the jewel it is were it not for the dazzling array of architecturally-distinctive National Historic Landmarks nearby. These include Monumental Church, Old City Hall, First African Baptist Church and the Capitol.

And this brings us to another vaunted landmark on Broad affected for the worse by the Pulse, the former First Baptist Church. This 1841 gem was intelligently re-purposed in 2007 as a Virginia Commonwealth University student commons building. Until a generic Pulse station was unceremoniously dropped on the sidewalk smack in front of its 177-year-old cast-iron and granite gate, steep front steps and classical portico, the Greek revival structure preened from the knob of Shockoe Hill and the terminus of meandering Governor’s Street.

That an iconic, modernist and incompatible Pulse station was plopped in front of this nationally-listed historic building is a travesty. How did it happen?

This isn’t the first time that Hunton Hall has been assaulted. In 1975, VCU sought to demolish the building so that Sanger Hall could be expanded eastward (at the time the outer walls of the high rise were faced with small ceramic tiles in a shade of bright blue more appropriate for public restrooms than a medical campus). But the public outcry, which included pleas from the prestigious National Trust for Historic Preservation, was loud and clear: Don’t tear it down.

Consider. The church’s architect was Thomas U. Walter, a man exalted as the dean of American architects during his storied career. His classical revival buildings defined Philadelphia for decades. He was also a founder of the American Institute of Architects. But most importantly, Walter designed our nation’s Capitol as we know it today -- the soaring dome and Senate and House of Representatives chambers.

Of course, in Richmond we are more impressed by local connections. First Baptist was built in Court End by a Baptist congregation that had been established in 1780. Its 1841 sanctuary, with colossal, fluted and deep-set Doric columns, later inspired the designs of at least three other Baptist churches here. These included First African Baptist Church (two blocks away on College Street) and Fourth Baptist Church at 2800 P St. on Church Hill. And in 1927, when the First Baptist congregation moved to its new complex at Monument and the Boulevard, it brought Walter’s design along with it, albeit enlarged and in red brick.

Soon after the congregation’s move to the Fan District, the Medical College of Virginia bought the old sanctuary and put to various uses, including the popular Campus Room restaurant in the basement. In 2007 the university oversaw a sensitive and state-of-the-art conversion of the old church into a student commons. Einhorn Yaffee Prescott of Washington was architect.

So how did this architecturally incompatible Pulse station get plopped here? 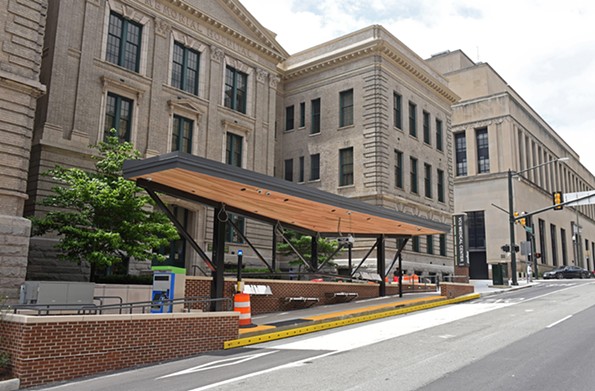 The BRT Final Station Location Report, which is available online, states that the station serving westward buses was proposed originally for a Broad Street location just east of 12th Street. Instead, after discussions with the Virginia Department of General Services, VCU and Richmond officials, it was determined that the station be moved “just east of the intersection of 11th Street.” This would have placed the station adjacent to Sanger Hall. It would also have done little to spoil the historic and aesthetic aspects of town. The map published in the report clearly indicates the station closer to 11th Street and west of Hunton Hall, though barely. It is distressing that the Pulse station somehow ended up where it is, trashing one of our city’s most important pieces of architecture, a remarkably beautiful edifice and a smartly re-purposed building.

Who was asleep at the wheel? To paraphrase Ricky Ricardo in admonishing Lucy, “there is some explaining to do.”

The station should be moved.