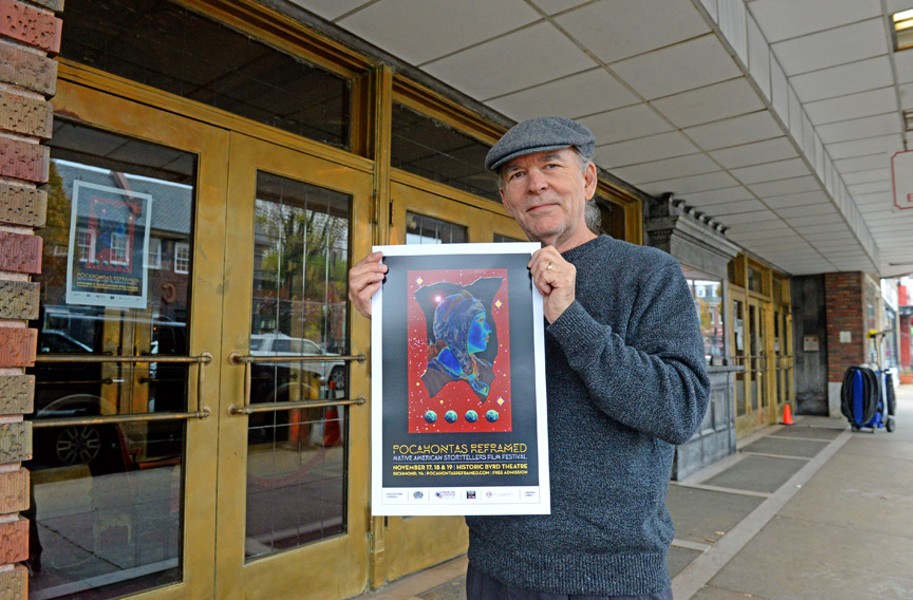 Scott Elmquist Brad Brown, assistant chief of the Pamunkey Indian tribe, was faced with the daunting task of starting a new film festival that hopes to become the premiere American Indian film festival on the East Coast.

For those not sure that Richmond's first American Indian film festival is a must-see, consider how legendary director Francis Ford Coppola reacted upon hearing about it: He immediately signed on as a sponsor.

"Pocahontas Reframed: Native American Storytellers Film Festival," a three-day event at the Byrd Theatre, involves nine of Virginia's tribes and screens films that have been official selections of prestigious events such as Sundance Film Festival, the Toronto International Film Festival and the South by Southwest Film Festival.

The idea was born at the end of last year's French Film Festival when a group of people with ties to the film industry — university professors, actors, a representative of the Virginia Film Office, the Byrd manager — began talking about doing a Native American Film Festival because there isn't one on the East Coast.

"We all thought it was a great idea, and they looked at me and said, 'Brad, you do it,'" recalls Brad Brown, a member of the Pamunkey Indian tribe who serves on its council and is presently assistant chief. He laughs at the memory.

Luckily, his job was made easier because Peter Kirkpatrick, co-founder of the popular French Film Festival, was friends with longtime actor George Aguilar, who knew almost every Native American actor and director.

"Having George as part of the conversation was invaluable because he knows the ways Native Americans are treated in this business," Kirkpatrick explains. "He asked how he could be supportive, and it went on from there."

The result is a long weekend that will weave together multiple genres by Native American artists: silent film, a 1961 classic now part of the Library of Congress' National Film Registry, documentaries, modern films, sketch comedy, a rapper who was part of the Standing Rock protest, and music performance. "The idea of the festival is that it's a community discussion between the public and the makers of the films," Kirkpatrick says.

Similar to the French Film Festival, movies will be introduced by members of the delegation in attendance, including Native American producers, directors and actors. Aguilar, a member of the Apache and Yaqui tribes, will present "Rumble: the Indians Who Rocked the World," a documentary about the influence of indigenous people on popular music. Among those featured are Jimi Hendrix, Buffy Sainte-Marie and Link Wray, who helped shape America's soundtrack.

Director Neil Diamond, a Cree filmmaker, will present "Reel Injun," which looks at how Hollywood has portrayed Indians and contributed to our understanding and misunderstanding of them. Using interviews people including directors and activists — Clint Eastwood, Sacheen Littlefeather, Robbie Robertson — Diamond's film is both a provocative and entertaining look at the racial politics of Hollywood.

Pulling the festival together has been time-consuming.

"I thought it was going to be a part-time job," Brown admits. "Until you do a film festival, you have no idea. It's a passion." Once he began digging in, Brown turned to the internet for assistance, researching how to create a film festival.

That's when he found out how good he had it. The first two steps — finding a venue and finding sponsors — are considered the most difficult and had already happened. Right from the start, Byrd Theatre manager Todd Schall-Vess had offered what Brown and Kirkpatrick call "the best venue in Virginia."

Besides Coppola, American Evolution, a group commemorating the 400th anniversary of several key events that occurred in 1619 (the first representative legislative assembly, the arrival of the first Africans and the recruitment of English women) signed on as a sponsor because it wanted the film festival to be a legacy project for the commemoration.

Brown was contacted by American Indian filmmakers wanting to be part of the event, and eventually he found himself in the unenviable position of having to reject films. But he's already starting to plan next year's event, so some of those films may be shown in 2018.

Currently, all major Native American film festivals are on the West Coast. The group's mission is to become the largest and most important American Indian festival back East. And because it's the first year, tickets are available on the website at no cost.

Brown sees Virginia as particularly well-suited to the festival because it was the first place of contact with the English.

"It's time to reframe those events and finally have the discussions about Native American people and cultures that never took place 400 years ago," he says. S