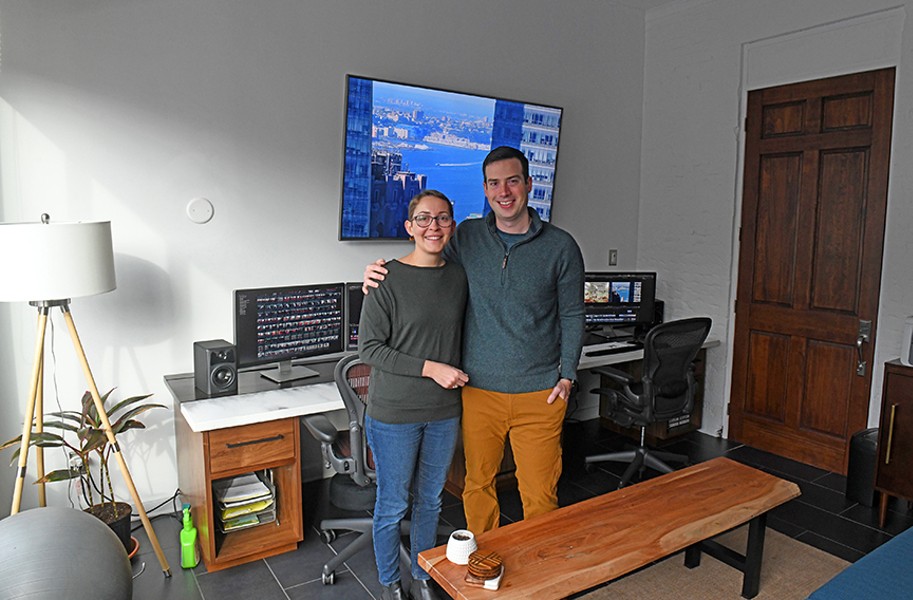 Tyler Kirby and his fiancee Janelle Proulx — the duo behind Departure Point Films —have been making movies for the Institute for Contemporary Art, Ryan Homes, the Chrysler Museum of Art and LookSee, since 2013, the year they met in art school at Virginia Commonwealth University.

After graduation that year, Proulx moved to nonprofit administrative and teaching while Kirby made marketing and technical videos. It wasn’t until March 2016 that Departure Point Films was launched. The two quit their day jobs that June. Since then they have traveled to such far-flung sites as Switzerland, Germany and Vietnam. In December 2018, they moved into a 650-square-foot two-room studio at West Main and North Brunswick streets.

Style: Why is this your studio? How is it different from your past studios?
Tyler Kirby: The location. We can walk from home and it’s close to a lot of our clients. Something we were also really mindful of when we were searching was accessibility. We are frequently loading equipment in and out of the office for film shoots so it’s important that there be at least one entrance that doesn’t have stairs.
Janelle Proulx: We’ve had more people visit us here in the last six months than we ever had at our old space in Shockoe Bottom and we were there for two years.
TK: We encourage people to come here. We’ve gone to great expense to outfit [the office]. Our new studio has its own parking spot directly behind our back door, and it has an ADA ramp so we don’t have to traverse any steps with gear. The new studio was also renovated recently and has a cleaner, modern look which has made us feel far more comfortable having clients visit us. It also is divided into two rooms, which allows us to have a clean, presentable, editing-client space in the front where the light is best, while the back room serves as gear storage, prep and a small kitchen.

Style: What commitments must be made to have an artist studio?
TK: I think just to use it!

Style: How about the most unexpected thing in your studio?
JP: Our front window is an accordion-style that slides open so we can essentially have an open-air editing studio on nice days.

Style: How often are you in the studio?
JP: Daily, with an occasional Saturday or Sunday when we’re on a tight deadline.

Style: What does it mean to you to have a studio?
JP: It has made us a lot more productive. When we need to spend long hours editing or working on a project, it helps to have a space that is separate from where you live, but that feels as comfortable as a home. It makes it easy to spend time here, hard at work, but also allows us to fully detach from work when we leave.
TK: There’ve been times where we have a rowing machine in here and a workout system in the bathroom that I can wheel out if I need to.

Style: What is something in your studio that you can’t imagine being without?
JP: A separate room to store and prep our gear. Our previous studio was one large room. … It could be hard to focus on editing while the other person [was] prepping and sorting gear. … Now, we can focus on editing and project development in one room and deal with prepping and packing in the other.