Even before the pandemic trapped hungry, dishwashing-averse souls in their homes, the food delivery market was booming. In 2019, Forbes reported that online food delivery was a nearly $200 billion industry. According to Upserve, national delivery apps like GrubHub, Postmates and DoorDash have grown “300% faster than dine-in over the last 5 years.”

As a result of this delivery boom, veteran restaurants and fledgling startups alike have started exploring the idea of creating an off-premises only dining model – the ghost kitchen.

Referred to in terms such as shadow kitchens and virtual-only restaurants, the idea is essentially the same: Sell food – the kind that has mass appeal and travels well – from some kind of kitchen through a delivery service. No storefronts, no walk-in customers.

“Ghost kitchens have been on the rise even pre-pandemic and when the pandemic hit, we started looking at that option,” says Trolley Eats Refreshments’ chief executive, Scott Halloran. “It’s a great way to utilize basically a vacant kitchen.”

The food service company offers a variety of corporate services like vending, coffee and micro markets. Groovin’ Gourmets Catering also falls under the umbrella of Trolley Eats, as does Parterre Restaurant at Linden Row.

When the pandemic shut everything down last March, Halloran’s catering and restaurant employees were out of work. “In an effort to think outside the box – we have a great staff and a great team of culinary professionals – we were looking for other ways to generate revenue,” Halloran says.

Empanadas, pizza, subs, baked goods – Halloran and his team of culinary professionals focused on items that were, according to their research, both popular and held up well during delivery.

There is no scintillating story behind each concept – Torpedoes Sub Shop is not the brainchild of a passionate chef who grew up atop a tiny sub shop in Philly – and each “restaurant” exists namely as its own bare-bones Instagram page.

But, Halloran stresses, there are local faces behind all the food being made at the 8,000-square-foot industrial kitchen once used solely by Groovin’ Gourmets.

“Part of our core value is transparency and doing the right thing,” Halloran says. “With the exception of Wow Bao everything else we do is made locally, designed locally by our culinary team – it truly is a local concept.”

For $2,000, any operator can purchase fast-casual Asian street food Wow Bao’s startup kit. Wow Bao is the only national brand that Trolley Eats uses, chosen in part because it was a proven concept. “We launched Wow Bao first as a test to learn from it, and decided to keep it,” Halloran says.

In a December National Restaurant Association article about ghost kitchens, Wow Bao Chief Executive Geoff Alexander said, “Our goal is for the operator to do $2,000 a week in sales by week six.”

There is something rather jarring about the way those in the industry discuss the ghost kitchen model. It feels more Silicon Valley than mom and pop, and the most salient movers and shakers are venture-funded companies, like CloudKitchens.

Anyone with an idea and entrepreneurial spirit can launch their own virtual brand with little overhead, using rented kitchen space from CloudKitchens. Kalanick’s company promises operators that with this ghost kitchen model, they’ll “minimize cost, maximize profit.”

Whether this promise bears fruit, well, remains to be seen.

As Halloran’s catering and restaurant staff members return to their normal posts this spring, he says they’re in the hiring process for the virtual food hall. “We’ve been eyeballing moving Trolley Eats to an offsite facility. We need more traction. Like any new business we’re still being introduced to the community,” Halloran says. “We need more people to try us and use us.”

Longtime restaurant strategy consultant and former restaurant owner Rebecca Thomas says the problem with ghost kitchens is that they are attempting to answer a too-reductive question: “How do we master contactless delivery?” Instead, restaurateurs should be thinking about a greater question: “How do we connect with customers within the confines of profitability?”

“They’re [ghost kitchens] a profoundly bad idea. When I think of community-based business, where value resides, it still is in the experience. The problem with ghost kitchens is that they take away a value-added experience,” she says. “I do think the pandemic has changed restaurants forever and I think the industry is ripe for innovation.”

The question restaurateurs must ask as we see pandemic restrictions lifted and the delivery boom potentially level out is: What is the appeal of virtual-only restaurants outside of the parameters of the pandemic? Does convenience trump experience?

Of course, it’s far too soon to speculate about what the world will look like a year from now, even six months from now.

According to the Richmond City Health District, as of March 15, 20.4% of people in Richmond and Henrico have received one dose of the vaccine, and 10.6% of residents had been fully vaccinated.

Restaurants that were closed during the winter months are slowly starting to reopen with patio seating and springtime menus replete with asparagus vichyssoise and sunchoke banana pudding. In light of a return to increased in-person dining, are these shadow kitchens a saving grace? Or specters of an unsustainable trend?

For restaurant vets Liz Clifford and Jon Martin, ghost kitchens work best when they are incorporated into a hybrid model.

The two run Fat Kid Sandwiches out of Hatch Kitchen, and will soon also operate out of one of the Hatch Local Food Hall stalls. Under their Dunharrow name, Clifford and Martin also own the rights to virtual brand Garden Party, plus they have a few other concepts in the works. Right now, you can order a decked-out sandwich for pickup from Hatch Kitchen, or through delivery from Uber Eats or GrubHub.

“For our particular business we are going to use this ghost kitchen as the prep for the food hall,” Clifford says. “So we will be able to have the ghost kitchen pay for itself and make money and also provide a lot of the stuff we need to keep the food hall going because there’s no space to do the preparation onsite.”

“I feel like the idea of a ghost kitchen gives restaurants an opportunity to help regain some COVID loss, if only a little bit,” Martin says.

For industry vet and fellow Hatch Kitchen resident Franklyn Harris, who recently launched his own ghost kitchen concept, Heavenly Cove, the off-premises-only dining model has helped him get his name out there and has allowed he and his team to tweak any glitches they’ve come across. “We’re getting our bearings, getting our pace down,” Harris says. “My plan is to get into a food truck before the year is over.”

By renting out kitchen space from Hatch, Harris says he has been able to work on his “own time, work toward the food truck and pump out food.”  His menu of Latin and Mediterranean-fused cuisine is available for pickup and delivery through Chop Chop and GrubHub. 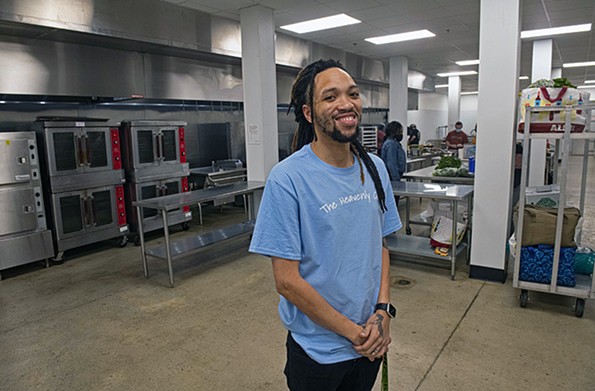 The appeal of ghost kitchens is that they cost relatively little to start, they allow new or experienced chefs a low-risk opportunity to introduce a new concept and they play into consumers’ ever-growing demand for convenience.

But competition is fierce—how are locally based operations like Trolley Eats and Dunharrow supposed to compete with venture-capital tycoons and national chains with thousands of available kitchens?

In June, Chili’s owner Brinker International started the ghost-kitchen-born brand It’s Just Wings. The wings are made in Chili’s kitchens, which you wouldn’t know unless you did some legwork online and delivered through third-party apps. According to CNBC, Brinker has said that the chicken brand is generating sales at a rate of “$150 million per year.”

“It’s interesting the way so many of these people are presenting themselves,” Clifford says. “Things may be presented as local or individual when they are actually part of a bigger brand.”

Does the future of dining look like one big marketing campaign? Will storied chefs and their dogged teams be forgotten in the name of fast and easy? It’s not so black and white, Clifford says.

“We’re very passionate chefs,” she says. “But we look at data too.”