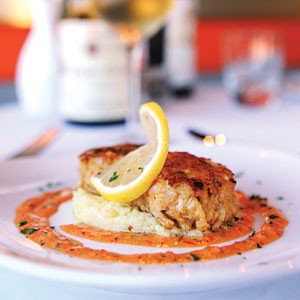 Talk about niche marketing. Amour Wine Bistro, the latest addition to the frenetic Carytown wine scene, has brazenly squeezed in across the street from the boisterous Can Can and two blocks from very busy Secco Wine Bar.

Newcomer restaurateur Paul Heitz, like a master vintner blending cabernet and merlot, has melded the features of a wine bar and a full-service restaurant into a unique dining experience —a wine-paired, fixed-price, extremely limited menu that's designed to please neophytes and serious oeonophiles alike.

The result is a delight, with the wine bringing out the best in the food and vice versa. Heitz is so confident in his selections that he gives few choices. Diners select from two appetizers, two entrees and two desserts, each accompanied by a 4-ounce glass of wine that Heitz selects. The cost depends on which of three levels of wine is chosen: discovery ($39), savor ($65) or excellence ($95) on weeknights; on weekends the price is $49, $79 or $109, reflecting additional small dishes. Lunch pairs two 2-ounce glasses of wine with the same food as dinner, with an entree and appetizer or dessert for $25-$16 without wine—or all three courses with wine for $33.

A different French wine or region is featured monthly. For November it's beaujolais; for December it's champagne and wine from Heitz's native Alsace. Last month it was bordeaux.

Chef Blair Bowles, formerly of Buckhead's and La Petite France, collaborates with Heitz to produce food that matches the flavor qualities of the wine. The menu changes weekly and features one ingredient, such as mushrooms, apple, lamb, cabbage or shellfish. Coming up are garlic, duck, scallops and mussels.

Each meal begins with a house-made tapenade (olive paste) and a bread basket from the Flour Garden Bakery, and with the soft-spoken Heitz or one of his sommeliers-in-training demystifying the pairings.

Recently, when mushrooms are the ingredient of the week, a juicy pork Wellington was topped with a thick, dark morel sauce accompanied by red wine — a 2009 Chateau Jacquet de la Grave Bordeaux, a 2006 Chateau Lyonnat Lussac St. Emilion or a 2006 Chateau Fonbadet Pauillac.

A flaky flounder steamed in parchment with chanterelles cream was paired with white wine — a 2009 Chateau Petit Moulin Bordeaux, a 2009 Chateau Bonnete Entre Deux Mers or 2006 Chateau Carbonnieux Pessac Leognan. Salad choices were mixed mushrooms and marinated vegetables or a portobello in a puff pastry with sage cream.

Another week featured squash. On the discovery menu, a creamy pumpkin soup was matched with a dry, fruity white 2009 Cuvee Hortense Entre Deux Mers, while a lamb meatball over spaghetti squash earned a ruby red 2009 Chateau Malbec Bordeaux. A grilled flank steak got a 2007 Chateau Lestrille Bordeaux, and roasted red flounder, moist and perfectly cooked, stuffed with crab and butternut squash and brightened by lemon cream sauce, was perched atop spaghetti squash. The fish was paired with a white 2009 Chateau Petit Moulin Bordeaux. To finish, an apple strudel or a crusty apple tart were washed down with a crAcmant, another French sparkling wine.

If you aren't willing or able to embrace the rigid parameters set by Heitz, you're probably not going to become a regular. While he'll reluctantly make substitutions — specialty soft drinks instead of wine, but at wine prices, or veggies instead of meat — what's the point? Those customers might prefer the small bar at the back for a selection of small plates and wines by the glass or flight.

Amour is developing a loyal clientele because what it does, it does well, in an atmosphere that's refined without being stuffy — linen table cloths, French cutlery, soft music and 30 seats well-spaced for easy conversation over well-executed, and constantly changing, pairings. S