Short films and big ideas stir the Byrd for another weekend film festival. 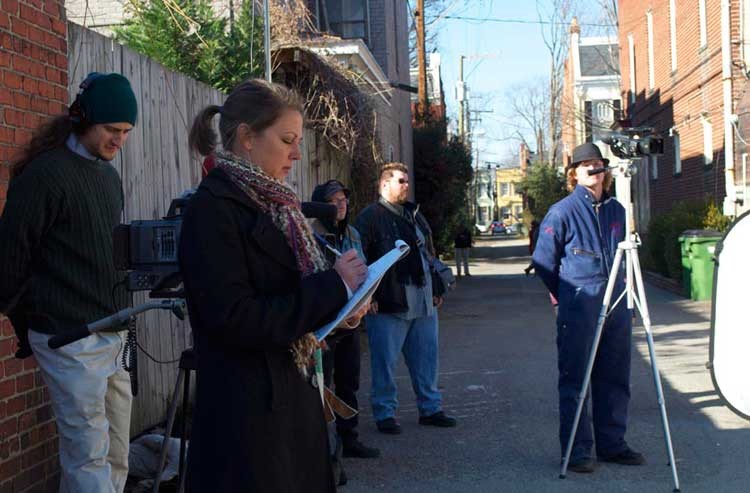 Random dog walkers and pedestrians who happen by the Fan's Scuffletown Park on a mid-January weekend see a curious collection of seniors and younger people age 8-14 congregating amid cameras, film crew and other helpers, likely handing out free coffee and cocoa.

This incongruous group is in the middle of making a documentary called "Trading Ages," pairing Richmonders of disparate ages for on-camera conversations about generational issues. The results are set to screen during the Moving Image Xchange — known as MIX — International Short Film Festival, which takes place Friday through Sunday, Feb. 17-19, at the Byrd Theatre in Carytown.

The festival's variety of screenings, including a slate of juried national and international shorts as well as local productions such as "Trading Ages," will culminate with an awards ceremony Sunday. "Trading Ages," created by exchange founder Heather Waters, is a fitting centerpiece for the festival's vision.

Waters' festival is being launched with her startup creative network, the Media Image Xchange, also dubbed MIX, an online directory and networking platform that brings people together — specifically media artists, such as writers, directors and producers, who can connect in its virtual space to get their projects and ideas off the ground. The directory is live in soft launch at themixchange.com, with a hard launch planned for late March.

Waters is a former actress who recently moved to Richmond. She seems like the kind of person who, having come up with a good idea, must make it 3-D.

Her festival, like its business-oriented sibling, is multifaceted, combining a traditional juried component with a shorter slate of locally produced movies. Thirty-nine international films from two to 30 minutes long, with topics as diverse as littering, dating and depression, will compete for a variety of awards in five categories. Some of the films include notable actors, such as David Alan Grier and Margaret Cho. Another features poet Derrick Brown.

Audiences also will get to see two films that were funded as parts of separate projects created to nourish film production in Richmond. One is a commercial project, "Strive," which recreates a memorable scene from the U.S. Open using the tennis courts in Byrd Park (a challenge, Waters acknowledges, especially because they didn't begin shooting until January). The second is the documentary "Trading Ages," the part of the festival Waters says was "closest to my heart," fulfilling her desire to include community outreach.

Waters says she hopes to make this festival an annual part of Richmond's movie scene. Judging by the work and attention that seems to have gone into its first showing, audiences might agree. "It was incredibly tough," Waters says, "but incredibly rewarding." S

The MIX Festival opens Friday morning with child- and senior-oriented screenings; the bulk of the festival takes place through the rest of the weekend, culminating Sunday with a 4 p.m. awards ceremony. "Strive" and "Trading Ages" will have multiple screenings. Passes, individual tickets and full schedule available at themixshorts.com.