These Richmond families know a thing or two about running a bar. 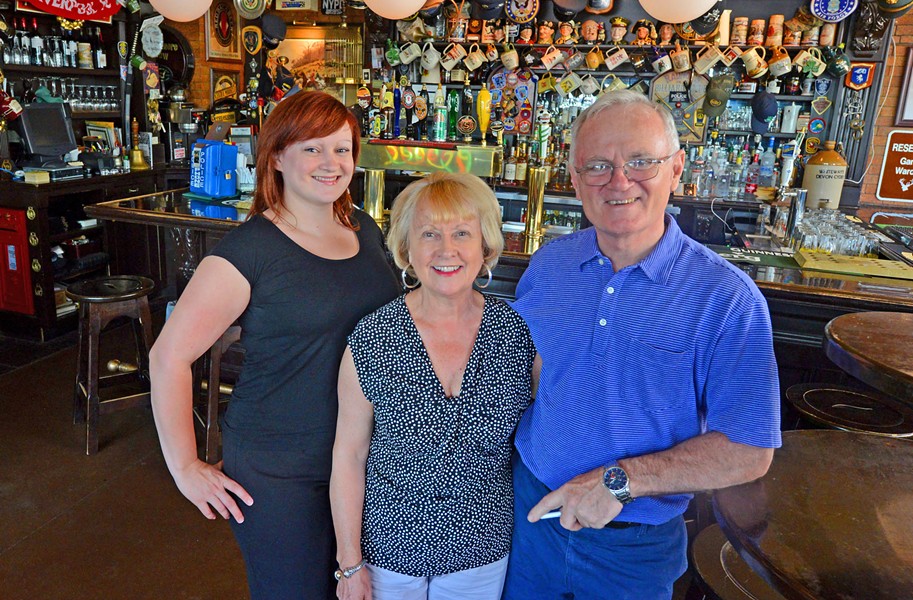 When you find the right bar, it feels like family. And for some people, it really is.

For a decade, Tommy Goulding has welcomed patrons into his beloved Shockoe Bottom pub, Rosie Connolly's, alongside his wife, Gladys, and their daughter, Helen Emerson.

"It's not easy, you know. The hours are all weird," Tommy says. "You've got to have a solid relationship to do this. It won't work with a shaky family."

Some relatives might wince at the thought of spending endless days and nights with each other, not to mention under the stresses that come with bar work — partying patrons and bar staff, tight financials and alcohol regulations, cleaning up when everyone else has gone to bed.

But for others, working with their kin makes it more bearable — enjoyable, even. Most of them also admit they'll kick some ass in the name of family.

"We get a lot of attention, and it's not always good," Casey West says from behind the bar at Sam Miller's in Shockoe Slip.

He and his fraternal twin, Tyler, are 23-year-old bartenders who've hit Richmond's nightlife scene with a striking enthusiasm. While Casey, who easily could be mistaken for a muscle-bound bouncer, slings drinks at Sam Miller's, his more Adam Levine-sized brother, Tyler, works the crowds farther down Cary Street at Cha Cha's Cantina, exuding an air of joie de vivre. 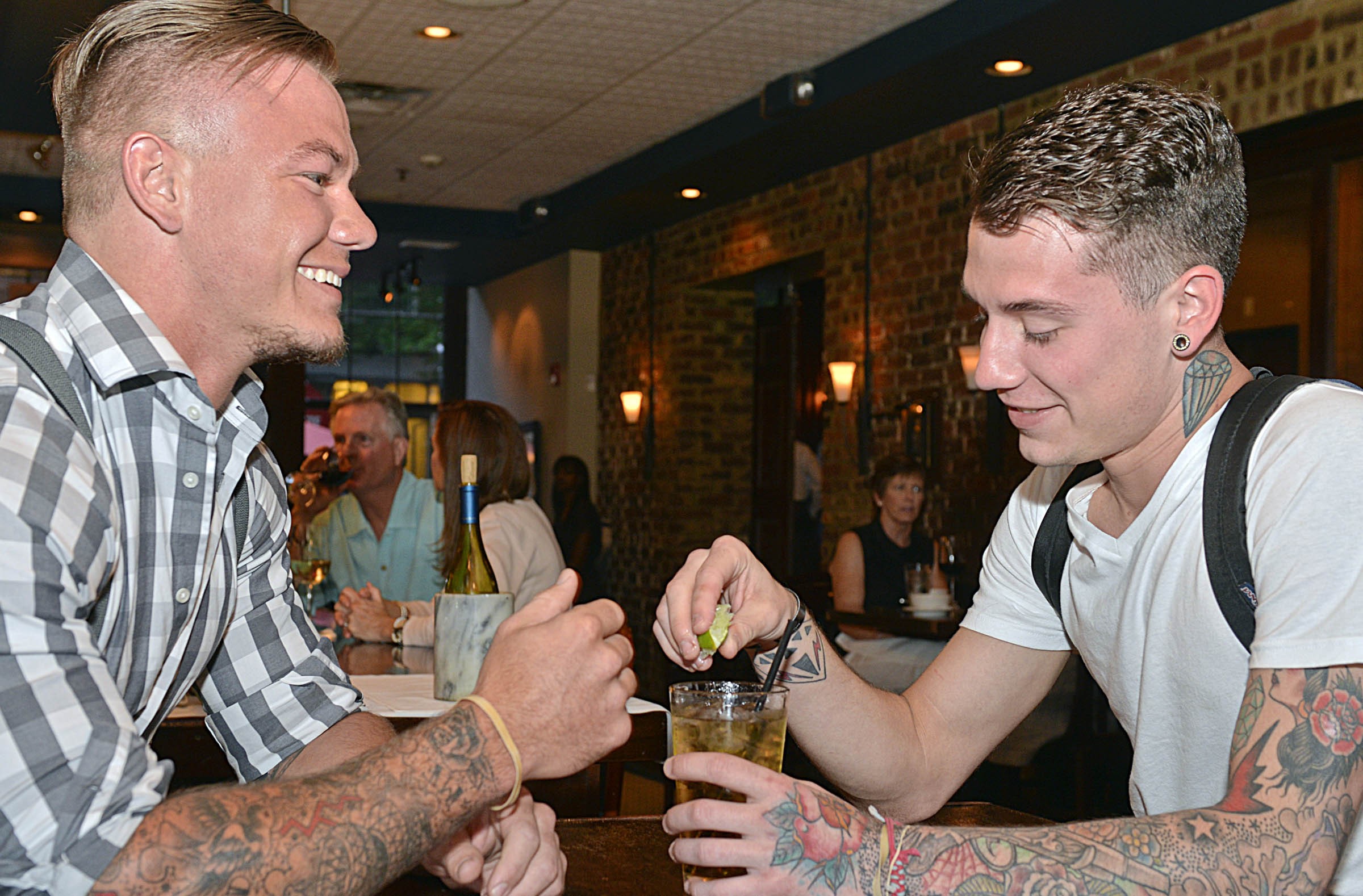 Building friendships, cultivating connections and making your presence known are crucial to bartenders, who succeed by building a following. But as a lot of regulars in the industry find out, it's a small — and chatty — scene.

"There are always rumors," Casey says, laughing. "I go out of town for four days and I've got three girlfriends and four ex-wives."

The West twins seem to have enough adventures under their belts to make "The Hangover" look like a family vacation. Elder by a minute, Casey is the self-professed alpha.

"Never in a million years would I have pictured me and my brother being bartenders," Casey says.

Both joined the military right after graduating from Thomas Dale High School in Chester. Tyler enlisted in the Army and Casey became a Marine. Growing up, their father went to jail, which meant they leaned heavily on one another. "I still play the father role," Casey says.

That dynamic can carry over into their night life. Tyler acknowledges that he doesn't like to go out drinking without his brother because it can get him in hot water. "He's very protective of me," he says. "I feel pretty unstoppable when I'm out because of that. I can talk shit to anybody," he adds, laughing.

Casey says the favor has never been returned. "Man, I've gotten in fights with bouncers at bars, been slapped by his ex-wife in a bar, I mean, you name it ... and he's gone," he teases. "Evades the scene faster than anyone I've ever seen."

When the stars align and both guys have a night off, "shit just gets weird," they say. Going out on the town is like an event. They'll barhop across the Fan, where behind-the-bar colleagues are known to throw out free shots and nights typically end with back-alley wanderings — though they pride themselves on making it back home safely.

The twins' strong bond almost seems like a brand — and that's good for business. "People feed off of our brotherhood," Casey says. "Tyler's my best friend. I love that kid more than anything in this world."

Rowdy behavior isn't confined to the 20-something set. While Rosie Connolly's crowd rarely is rowdy, Tommy Goulding recalls having to toss out a foul-mouthed tweaker who assaulted his daughter.

"One girl got wacky, she was definitely on drugs," he says. "She clouted Helen, so I took her out the door. Then, she pushed me down out into the street. We both got banged up."

Their family embraces the typical scouser motto, his daughter says: "We take care of each other and don't take shit from anyone else."

Owner of the formidable restaurant and bar troika Toast, Estilo and Dash, Jessica Bufford says she was willing to take a punch for her husband, Josh, back when she was managing Three Monkeys and he was a fill-in door guy a few years ago. "I was like, this drunk douche bag is not going to talk shit to him," she says. "I jumped in between them while a whole patio of popped collars looked on."

Naturally, the benefits of working with family go well beyond someone physically having your back. Bufford says that she and her husband just get each other and that "the unspoken knowledge of how we want things handled" makes them a highly effective tag team in the workplace. She credits a legendary Richmond food family with helping her understand how to run a business with her spouse.

"I worked for Katrina and Johnny Giavos for years and I witnessed their dynamic which was helpful for me," Bufford says. While some of their best meetings happen over a glass of wine and takeout away from the restaurants, not bringing too much business home is one challenge with which they struggle.

"We don't have kids, pets, not even a house plant because we work so much," she says. "Sometimes I will pull a Zack Morris timeout in the middle of a conversation just to make sure we keep the balance." 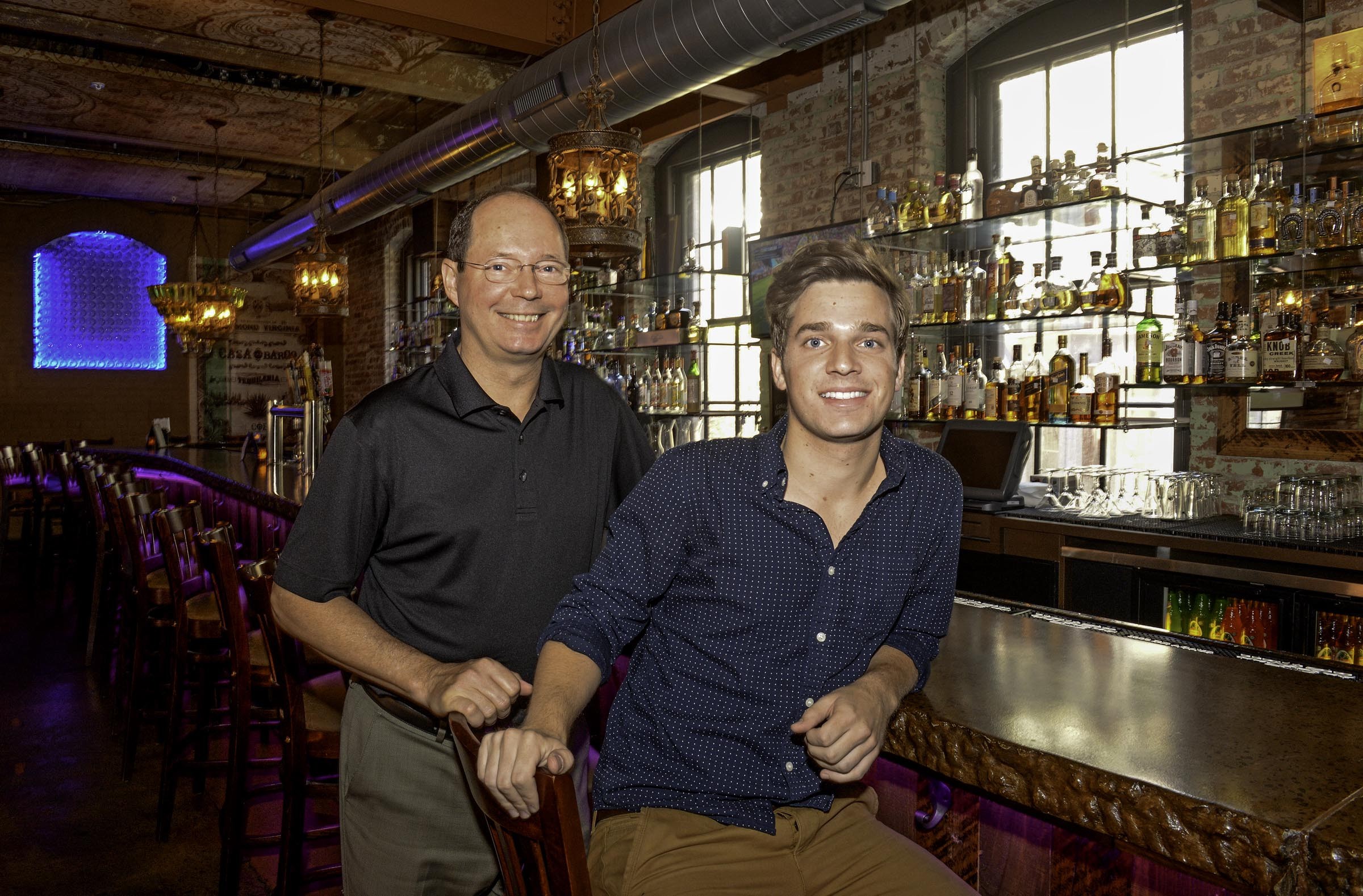 Kevin Healy, who owns the Boathouse and Casa Del Barco, says that working with highly skilled relatives can make running an operation more successful. In the past year and a half, he says, his son Colin helped flesh out design, food and drink and other concepts at Casa, a restaurant and tequileria on the Canal Walk.

"I'm not really looking for another bartender out of my son," he says. "I'm looking for someone who can help me run this business."

The younger Healy is a jack-of-all-trades with a hand in things as varied as graphic design, social media strategy and analysis of financials. He's also a musician. Having a youthful hand in play also helps scope the competition and keep things relevant.

"I stopped going to bars at 11 o'clock at night a long time ago, but that's right up his alley," Kevin Healy says. "He can tell me what's going on in the downtown scene."

Above all else, there's commitment, something that runs true across invested families. "There's no punching the time clock," Healy says. "There's no topic that can't be discussed. It's an all-in attitude."