Chesterfield's Dan Gecker: "I hope you use this to get site control." 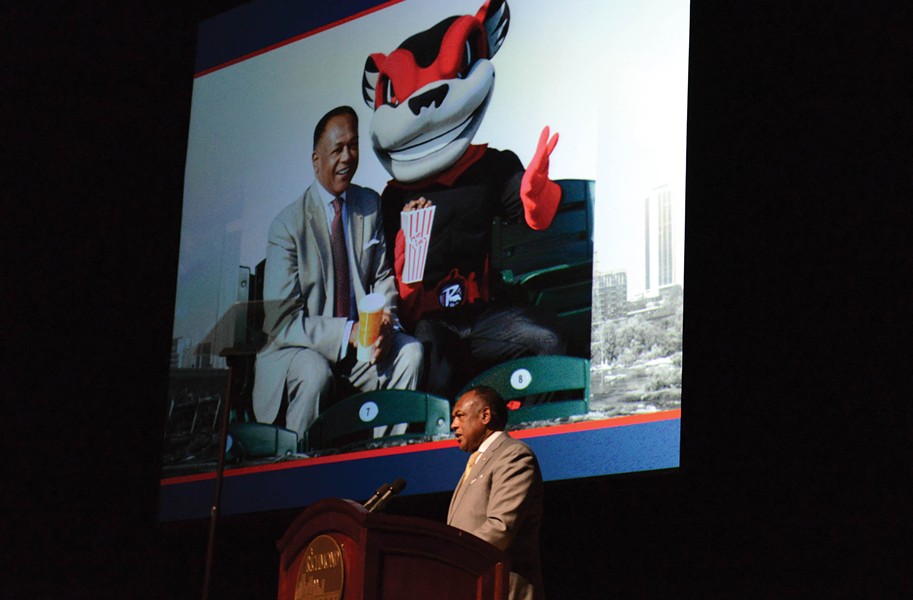 Scott Elmquist / File Mayor Dwight C. Jones talks up his plan for a ballpark-centered development in Shockoe Bottom during his State of the City address earlier this year.

In an exchange of text messages with a top city official, a developer behind the alternate proposal for a privately funded ballpark on the Boulevard suggested the emergence of a competing stadium proposal actually could help the mayor.

“I hope you use [this] opportunity to help get site control,” Gecker wrote, in an apparent reference to the difficulty the city has faced as it struggles to finalize the details of the Shockoe deal with land owners and developers. The city expected to have that aspect of the plan completed more than two months ago.

“Tell them they are no longer the only game in town,” Gecker, who also sits on the Chesterfield Board of Supervisors, wrote to Marshall.

Style obtained the exchange from the city through a Freedom of Information Act request. The conversation took place May 1, the day after news broke about the existence of a competing plan.

Regarding the sudden publicity surrounding the plan, Gecker struck a conciliatory tone.

“I am sorry this went public,” he wrote. “Don’t trust politicians is something I should have known. Still looking to be a lifeline not a competitor. We will not release details or talk about it publicly. Good luck.”

“Thanks,” Marshall wrote in response to the text.

In the same exchange, Gecker also took issue with Mayor Dwight Jones’ comments earlier that day tying him to the deal.

“Is there some reason you want me to be perceived as the driver of this?” Gecker wrote. “As far as I am concerned as long as you redevelop the Boulevard promptly I am happy.”

Rebkee has said it’s leading the development team, which includes Gecker and other investors. The text echoed an email from Gecker to Marshall sent earlier that day in response to a letter from Marshall.

In the letter, Marshall thanked Gecker for offering to brief the city on the alternate plan, but informed him the city wouldn’t set an appointment until the developers provided “projections of new revenue for the city from the site and their underlying assumptions.”

Gecker responded by asking why the email was sent to him and not Rebkee. “I am a little confused regarding the mayor’s alleged statement that the Boulevard alternative is my plan,” Gecker wrote. “You know that to not be the case. … I would appreciate the city correcting the misimpression it has created regarding the driving force behind the Boulevard proposal.”

Gecker stressed that the alternate plan was intended only as a “quiet alternative” in case the Shockoe deal failed.

On Monday, Rebkee’s principals, Robert W. Hargett and Kevin T. McFadden, sent a formal letter to the mayor reiterating that point: “Our intent all along had been to provide the City Administration with a lifeline -- a face-saving place to turn in the event the difficulties that are rumored to be hampering completion of the City's proposed project in Shockoe Bottom turn out to be insurmountable.”

But the developers went on to say they understand Jones has made it “abundantly clear” he isn’t interested in pursuing an alternative to his Shockoe proposal.

“While we don’t agree this is in the city's best interest,” the developers wrote, “we respect that decision. We also recognize that no plan can go forward without the support of those in control of the city. A transaction of this scale is difficult with parties who share the same goals; it is impossible between those that do not.”

Jones’ press secretary, Tammy Hawley, said the mayor’s office has not yet responded to the letter.