In spite of cringe-worthy moments, “Tomfoolery” mostly has fun exploring the legacy of a satirical songwriter 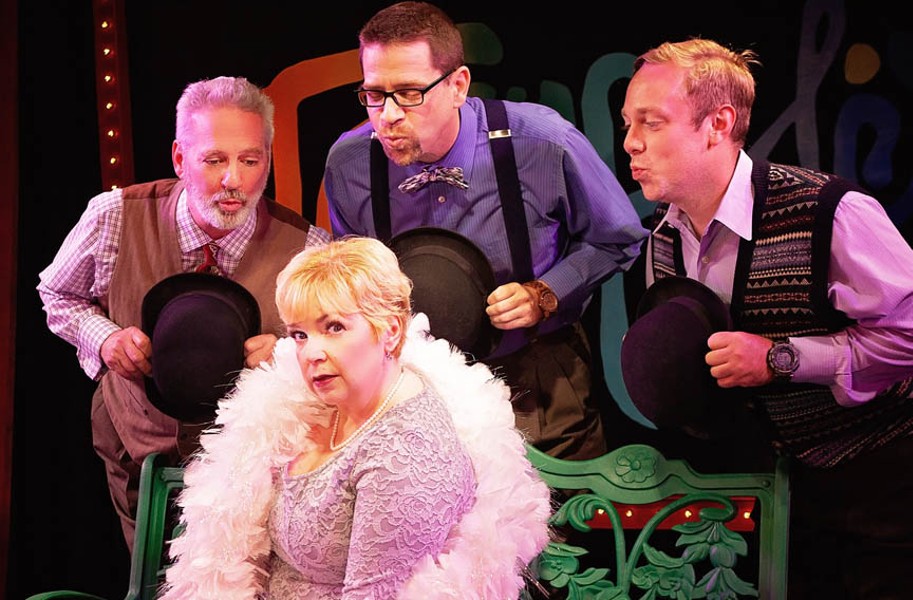 Tom Lehrer might not be a household name these days, but in the 1950s and '60s, he was well-known for his short, biting satirical songs. Some might recall a high school chemistry teacher playing Lehrer's "The Elements," in which he lists the elements of the periodic table to the tune of a Gilbert and Sullivan song. But most of his songs are original compositions, skewering subjects as varied as folk music, marriage and nuclear war.

"Tomfoolery," a musical revue of Tom Lehrer's songs, currently playing at Swift Creek Mill, is an enjoyable experience whether or not you're already familiar with his work. Director Tom Width has styled it like a variety show, with the actors performing under their own names and portraying multiple humorous character types. Width's set is bright and colorful, and Maura Lynch Cravey's costumes are, too. The campy props add to the variety show appeal of this production.

The four cast members, Richard Koch, Bryan Harris, Debra Wagoner and P.J. Llewellyn, are all notable talents with winning vocals and great comedic energy. They keep the show feeling vibrant and fun as they move through song after song, joke after joke. Standout numbers include "When You Are Old and Gray," a duet in which Richard Koch and Bryan Harris anticipate growing tired of their spouses, "Oedipus Rex," which sees Debra Wagoner channeling Liza Minnelli and doing it well, and the cute kids' song, "Silent E.," which Lehrer wrote for the 1970s educational TV show "The Electric Company."

Musical director Paul Deiss and his phenomenal band are also a part of the ensemble, onstage and interacting with the cast throughout the show. Deiss even performs one of the songs, "The Old Dope Peddler," at his piano, in a moment that feels the most like one of Tom Lehrer's live performances.

The show does feel a bit dated — fear of a nuclear bomb is a recurring theme, here — but there are a few nods to current events. The song "George Murphy," about the actor and dancer turned senator who paved the way for so many entertainers turned politicians to come, is perhaps even funnier in a modern context.

Lehrer's humor runs the gamut from innocent to bawdy to gruesome, and some of these jokes might offend modern audiences. "National Brotherhood Week," a song pointing out that a week of brotherhood does little to mitigate a culture of hate, includes some rather hateful lyrics. But what bothered me the most were the racist stereotypes and gestures incorporated into the choreography for "Who's Next?" a song about the many countries rushing to get their hands on nuclear weapons. Some of the things that could be considered offensive in this production are a reflection of Lehrer's time and place, but the racist choreography is a directorial choice and really doesn't need to be there.

All in all, "Tomfoolery" is an entertaining show, full of clever satire and some adult humor. In spite of the outdated references and occasional cringe-worthy moments, it's a fun, funny production that requires no prior knowledge of Lehrer or the time. S