The hidden meanings behind those leftover piles of snow in Richmond streets. 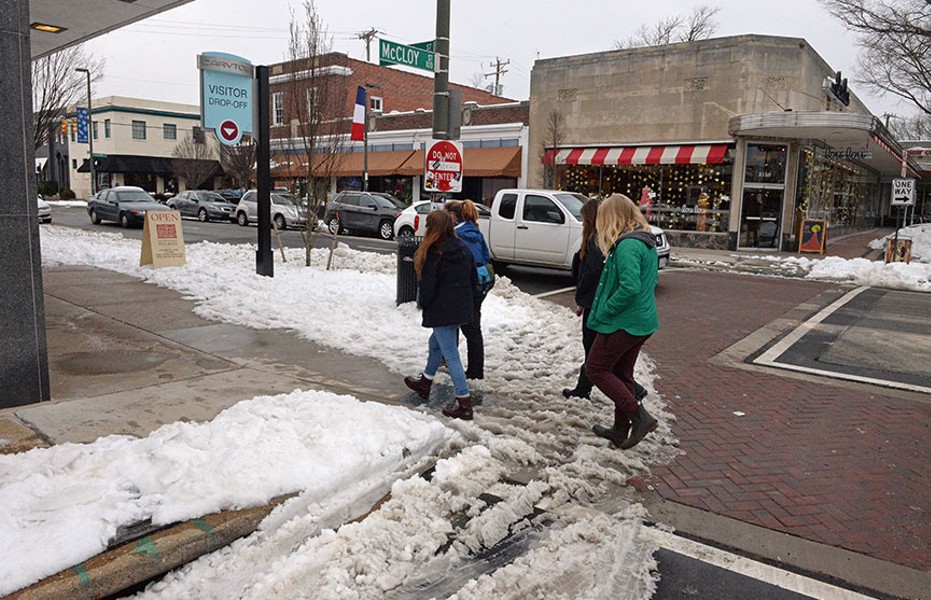 John Bolecek stands at the corner of Franklin and Eighth streets, pointing at a wet pile of snow.

It’s Wednesday during his lunch break, and by now the city largely has dug itself out from the six fluffy inches of snow that fell the day before.

But slushy piles remain on street corners, in intersections and around crosswalks. It’s these remainders that Bolecek has set out to find and document.

That’s because the snow that survives in urban areas in the days after it falls reveals a lot about how cars use -- and don’t use -- city streets. And that’s key information for Bolecek, the statewide bicycle and pedestrian coordinator at the Virginia Department of Transportation and a member of the city’s Traffic Safety Commission.

Take the pile on the southeast corner of Franklin and Eighth. It extends from the edge of the sidewalk about eight feet into the street. That eight feet could be turned into a curb extension to make pedestrian crossings shorter and safer without hindering the flow of traffic, Bolecek says.

To Bolecek, places where leftover piles of snow remain in the street are ripe for reclaiming as pedestrian space.

“The snow is a physical object showing you that no car has come through here,” he says. “You could extend the sidewalk all the way out to here and there’s no loss of anything -- no loss of parking, no loss of travel space for cars -- just extra pedestrian space. And I think that’s the main point.”

His work documenting snow in streets is connected to his position on the city’s Traffic Safety Commission. Using his findings, he’s considering a presentation to City Council showing where the city could make pedestrian improvements.

The phenomenon, curb extensions and other pedestrian refuges created by snow, has been dubbed “sneckdown” by urban planning and pedestrian advocates. It’s a concept that, once you know about it, you start seeing everywhere -- at least in the days after a good snow.