In Pursuit of Tradition

The Egyptians did it. George Washington, too. The allure of the elusive fox. 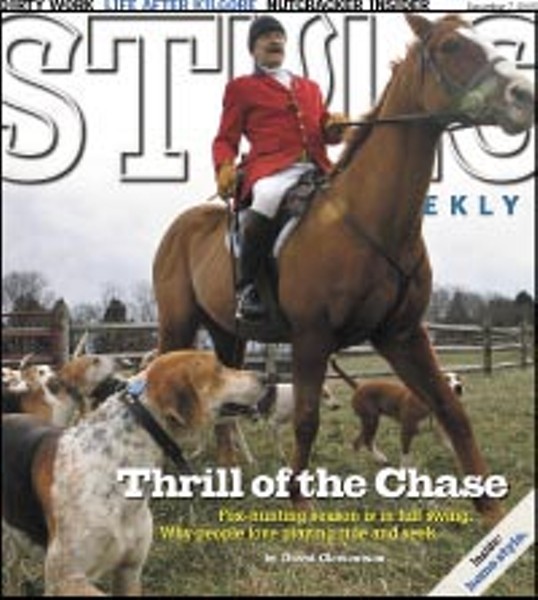 Kneipp is decked out in traditional livery for the opening of fox-hunting season in Virginia, Oct. 29. He sports a red coat, gray collar, gold buttons, white stock tie, gold pin, hunt cap, brown-top boots. There are no guns here. Kneipp's only weapons are fox-seeking hounds and a hunting horn of copper and silver that was passed down to him by his godfather. "I'm an anachronism," he says coyly.

Fox-hunting season runs through March, with a hunt every Tuesday, Thursday and Saturday. There are more fox hunts in Virginia than any other state, yet it's hardly a mainstream sport. Those who take part seem to enjoy basking in the lush, rolling countryside, connecting with tradition and partaking of the pageantry of galloping alongside hounds for the thrill of the chase.

It's an adventure, they say. "It's on the edge," says Mary Ellen Murray, a real estate agent about to set off on a hunt with her horse Playboy. "Adrenaline flowing all the time," adds her husband, Jim, a retired CPA, while his horse Gus nips at Playboy.

A blistering cold morning has met the Murrays and about 75 other horse and pony riders gathered at Fullstream Farm in the town of Manakin-Sabot. They're here on opening day to "bless the hounds" before heading off to track down gray foxes, which are indigenous to Virginia, and red foxes, which the colonists imported from England and which migrated down from New England. Fullstream Farm's kicked off the season this way every year since 1949.

The enthusiasts are members of the 118-year-old Deep Run Hunt Club, which comprises 160 sprawling acres in Manakin. The club derives its name from the stream that gurgles through the western tip of Henrico County into Tuckahoe Creek, as well as Deep Run Turnpike, or as it's now known, Broad Street. Some members trace their Deep Run lineage back generations. Many of them even spent Thanksgiving together — going to church, hunting and having a meal. "It is a family," says Andy Shield, the owner of Fullstream Farm.

Ginny Perrin, a member of the club since 1980, has been fox hunting for 38 years — since she was 9 years old. She started in Greensboro, N.C., and Danville, on a gray pony named Happy Jack, and soon fell in love with the sport. "I'm definitely still in love," she says, and tries to describe the rush. "Your hair stands on end as you can feel your horse's heart beat as well as your own."

About three miles from Fullstream Farm, traveling down Manakin Road, past Deer Lick Farm, Red Fox Road and Manakin-Sabot Equestrian Center, is a white wooden sign on a patch of grass by the road. Swinging in the breeze from a black pole, the sign features a sketch of a fox's head, and in bold capital letters: PRIVATE.

Along the property's quarter-mile paved entrance, muddy horses coated in Piedmont red clay graze near obstacle jumps, and signs warn riders to have a helmet and a signed waiver. There are two tennis courts, a pool, horse stables, show grounds and old dog kennels. Remnants of an ashen bonfire sit in the center of the circular driveway that forks to the left. Lying unobtrusively in the woods is the unembellished, rustic clubhouse. A copper door-knocker with an oval handle droops from the mouth of a glaring fox.

Inside, a stuffed red fox greets visitors, gazing across the entranceway at two glass-encased rainbows of prize ribbons from a 1988 international horse show. Brown wooden beams are strewn across the tall ceiling, and a bookshelf features such titles as "Seabiscuit," "The Fox and the Hound," "Outfoxed" and "Never Outfoxed."

The walls brim with silver trophies, paintings and framed photographs of huntsmen of yore. One of these is a grinning Dr. James Asa Shield, wearing a black top hat and black boots, as he and his wife sit proudly perched on gray horses.

Asa Shield, Andy Shield's late father, was the founder of Fullstream Farm. Toward the end of his career as a doctor of psychology and neurology, Shield taught at MCV and worked with Dr. Weir Tucker at the small private Tucker Hospital on Franklin Street. In 1946 he bought the farm property, slowly building it into a haven for Richmond's horse enthusiasts and fox hunters. He became a Master of Fox Hounds in the late '40s, charged with leading the troupe through the wilds on each hunt.

Today, Perrin serves as the master. The mother of three has held the title since 2001, when her husband, Coleman, forfeited the reins. "This is about as good as it gets," she says, beaming before setting loose on a fast-paced jumping flight into the woods.

Fox hunting is more than 2,000 years old, dating back to the Egyptians, who used stags and boars instead of hounds to find foxes. The form of the sport popular in Virginia began in England in the 16th century. Unlike in Virginia, hunters in the English countryside have used small terriers to chase the unwanted "vermin" into holes in hopes of killing them and ridding their farms of them.

Also unlike in Virginia, fox hunting in England became a national controversy in recent years, drawing fire because it was considered cruel and inhumane. It's since been banned. Hunting here hasn't been considered a blood sport, Shield says. "The sport in this country is done in tradition to honor and respect the fox and the etiquette," he says. "Of course PETA would disagree."

Maybe so. But fox hunters in Virginia say there are no threats by legislators to clamp down on their sport. Foxes aren't endangered in Virginia, although coyotes, developers and automobiles are putting a damper on their prevalence. While they feel closely aligned with law-abiding deer and duck hunters, they have no lobbyist of their own in the General Assembly. The Virginia Board of Game and Inland Fisheries dictates the fox season and regulates hunters by requiring them to keep a registered card on them while hunting. This costs $20 annually.

Yet it's difficult to compare fox hunters with the stereotypical bushy-bearded, orange-jumpsuit-clad hunter lying in wait for a deer.

"It's nothing to do with firearms or anything of that sort," says Shield, wearing a gray tweed jacket, yellow V-neck cardigan sweater, dapper gray slacks and loafers. The horses — Thoroughbreds, warm bloods and cross-breds — are dressed for the formal occasion with their tails and mane braided. "Our intention is not to kill the fox," Shield says. "We enjoy the chase."

In fact, Perrin says, although the group holds between 60 and 70 hunts a year, it may average only one kill a year — or at least, the hounds do when they catch the fox. "Last year we didn't have any," Perrin says. "It's a very unusual occurrence."

The most famous and skilled fox hunter in Virginia was George Washington. He had his own pack of hounds and would hunt all day. "Fox hunting was his passion," says Jim Murray, a Deep Run member. "He was absolutely fearless, very strong and had great stamina — a terrific rider."

Jackie Kennedy had a farm in Northern Virginia and chased foxes in Orange County's Middleburg hunt.

"It just gets in your blood," says Murray's wife, Mary Ellen, 60, who's fox-hunted for two decades. She recalls having a pony at age 11 in her back yard on South Wilton Road, riding it through the University of Richmond and the grounds of the Country Club of Virginia. Curious folks would look out their windows, she says, watching her ride her horse Hillbilly down Cary Street Road. Murray broke her neck in a fall in Goochland County 10 years ago, but has remained enthusiastic nonetheless. "I'm passionate about it," she says.

"It is exciting and it's part of our culture," Jim Murray says. "Even before we were farmers we were hunters and gatherers."

Preston Roper, an 11-year-old from Beauford Farm, is tackling his third opening day jaunt. "I hope they find a fox," he gushes, straightening his back atop his steed, Oliver, who, he brags, can jump three feet.

In his numerous hunts, Roper has yet to see a fox, much less see a fox killed. According to legend, when a hunter witnesses his first kill, a rare occurance, the huntsman would smear blood on the forehead or cheek of the de-virginized hunter.

Deep Run abolished the tradition 20 years ago, but it still follows the tradition of awarding the "mask," or fox's head, to a prominent person in the club; gives the "brush," or tail, to a visiting dignitary; and the "pads," or feet, to younger hunters like Roper.

This hound-blessing day, the riders hunt from Shield's farm within a 3-mile radius, staying near Fullstream Farm, going west to Cardwell Road and northeast up to Hunter's Hill Farm.

Ideally, the action would unfold as such: The huntsman leads the pack; the whips keep the hounds focused on the scent of the foxes; the master leads the horses; the wind blows; the hounds sniff a fox and start excitedly crying; the huntsman casts the hounds into a "covert" where they think the fox is hiding; they chase the fox by following the scent; the hunt field follows; and they celebrate their trophy.

Although the purpose is not to kill the fox, Murray says, "If the pack catches a fox, it does not survive." Still, that rarely happens. Although a pack of dozens of snarling dogs are in feverish pursuit, the fox has the upper hand. In a short sprint, a fox will outrun a hound. The fox's scent will disappear in warm weather, in a creek or through a herd of cattle or deer. The ruddy mammals can also lose the hunters by diving into their holes, which are too small for a hound to enter, or by climbing a tree.

James Causey, a native of England, previously witnessed the gala in his homeland. In those days, he explains, hunters would gather in small village squares, the local pub would open up, and the rider would grab port off a silver platter before heading into the wilds. Fullstream Farm isn't exactly a village square, but it does have a tavern, and the riders are offered port before their chase.

One attendee not enjoying the port (he opts for a cup of apple juice) is the Rev. John Adams, vicar of Episcopal Church of Our Savior in Montpelier. For the past 12 years Adams has held the prestigious role of "offering a prayer of blessing for the horses, riders and hounds." What about the foxes? "Oh, we mention them too," he says.

With human heads bowed across the field while jittery horses clop impatiently, Adams asks God to bless those present, and "shield them from danger of life and limb." Not neglecting the prey, he beseechingly adds: "Bless the foxes, that they may run straight and true, and finally find their destiny in thee."

"It's a beautiful piece of Virginia history that's wonderful to experience," says Hunter Applewhite, director of marketing for Dominion Resources. He says he married into "the heritage" thanks to his wife, Katherine Shield Applewhite. As the hunt begins, he luxuriates in the atmosphere. The pack hurdles around the lake, still no fox odors wafting into canine nostrils. Then the pack bounds into wooded terrain, picking up a scent. The fox. They chase it for about 10 minutes before losing the scent in a clearing and eventually return at the end of the hunt empty-pawed.

Roper, undeterred, says he'll hit the slopes again each weekend. "I always hope that I will see a fox," he says. And when they get one? "I'll be pretty happy. S