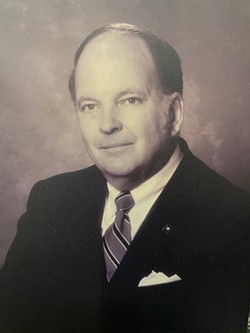 The sun sets on a pig roast in the town of Franklin in autumn 1997.

"John, it's late, shouldn't we be heading back to Richmond?" a campaign aide asks the wheelchair-bound candidate for lieutenant governor who is rolling, and pressing the flesh, through the crowd of Southside Virginia Republicans.

"There are folks I still haven't met," replies John H. Hager, who goes on to win the election for Virginia's second highest elected office and to serve from 1998-2002.

"John, it's late," a colleague reminds Hager as the third ballot approaches in the election to choose a competitor to face Democratic Rep. Abigail Spanberger in November.

He doesn't vote for the eventual winner, Del. Nick Freitas, but for a more moderate candidate.

A little over a month later Hager, an effective, beloved and inspirational civic leader during his entire adult life, died at his home in Windsor Farms after a brief illness. He was 83.

Durham, North Carolina-born Hager was working in New York in 1973, a rising executive with the American Tobacco Co. when he contracted polio. Then, from Richmond, where he had settled in 1965, he rebuilt his life with Margaret "Maggie" Chase Hager, his devoted and sharply focused wife, at his side.

Although a 2001 run for governor was unsuccessful, the affable Hager remained a major player in Republican politics, serving as chairman of the Republican Party of Virginia from 2007 to 2008. Much of his perennial appeal came from being a centrist leader who worked effectively with those on both sides of the political fence.

In the years immediately after the 2001 attack on the World Trade Center, Hager served in the Democratic administration of Gov. Mark Warner as head of the Commonwealth Office of Emergency Preparedness. Later, for the George W. Bush administration, he served as assistant secretary for special education and rehabilitative services in the U.S. Department of Education. In this capacity, he sought innovative ways to connect children and adults with disabilities to more options for independent living.

Often driving himself in one of his beloved Cadillacs, Hager was an essential and welcomed presence not only on the political scene, but in the realms of Richmond sports, culture, tourism development and the social whirl. He was an angler and inspired countless people with his athleticism as a frequent wheelchair-marathon racer.

Also he served on some 80 boards and organizations including leadership roles at the Virginia Museum of Fine Arts, the Jamestown-Yorktown Foundation, the Maymont Foundation and the Greater Richmond Metropolitan Convention Center. At weddings and society functions he loved to roll onto the dance floor and take spins on the dance floor. He was smart and understood -- and liked-- people. He always remembered names.

"John was present, he showed up," says G. William Thomas, a longtime friend. "He was engaging and supportive."

"You always knew he was there because of his charisma and that direct gaze and sincere smile," says another friend and political associate: "In many ways he was Mr. Richmond."