Scott Elmquist Jim Wark is pictured taking a break at Montrose studio in 2015. Wark passed away the morning of Friday, Feb. 7 after a brief illness.

The wind is howling and the chimes are ringing. We have lost a mighty force in Richmond who covered the town with his passions and friendships.

Jim Wark passed away suddenly this morning after a brief illness. As I write this, the news is spreading via social media and my phone is blowing up with condolences.

His loss will be hard to reconcile but I hope I can offer some solace.

There is no question that Jim was rock royalty in Richmond. He made the electric guitar bend in numerous local bands including from Janet Martin to Chrome Daddy Disco, Uncle Drew and the Powhite Boys to Ron Moody and the Centaurs, Billy Ray Hatley and the Showdogs, Billy and the Buttons, the Gobstooppers, (my band) the Taters, the Super Sugar Beats and of course, the Rock and Roll Jubilee. He was a shredder for sure, a master head cutter but he could also play as melodically as a Louis Armstrong solo.

For those who don’t know him, there will be many tributes. You will hear his name and learn of his many contributions: from chief executive of Virginia Voice to former publisher of Style Weekly, from third-grade teacher at Blackwell Elementary to his leadership volunteer positions with the Richmond Folk Festival, Venture Richmond and the board of directors at WRIR, Richmond Independent Radio. Wark set out to make a difference in this city and he did.

And for those who knew and loved Jim, we have our special memories as we grieve the loss of this great, sweet man.

To be a friend of Jim’s was to be loved unconditionally. Arguments wouldn’t tarnish the relationship only strengthen them. It was more about enjoying the time together. You relished your time with Jim like a fantastic book you read slowly to savor it.

He had the wit of a classic Catskills comedian. I’d try to be funny, but Jim was funny. His quick wit made for easy laughing fits and, as great people usually do, he had an unforgettable laugh. Getting him to crack up was always one of my greatest joys and he was absolutely a joke machine.

His family meant the world to him. When he lovingly referred to his wife as “the mysterious Mrs. Wark” or just simply “darlin’” you always got the impression that he was smitten with her. When he’d talk about his grandkids, Caleb and Maddy, he would light up and all appointments would be canceled full-stop: “Nope, can’t hang out, all booked up, my grandkids are in town.” He loved it, LOVED it. When they were younger, his house would be loaded with toys just anticipating their next visit to Richmond.

The only thing that Jim would put up there with his love of family was his love of music.

The first time we played together he took a solo on a song he’d never heard and was riffing to the lyrics! I knew from that point on, I needed Wark in my life. 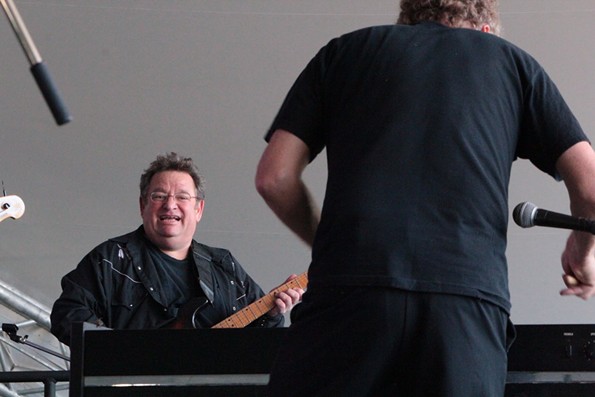 He so loved to play. Music was his life. He even told my brother that playing music gives him the energy to do everything else. He was currently in four bands. He said to me one time, “in this town, you have to be in five bands to play once a month.” He did love to shred. He thought everyone should have an acoustic guitar “in case the power goes out.” He was leery of solo performers as well: “If the poster is a black and white photo of a spotlight on a microphone and an empty bar stool, run!”

Jim: We carry you in our hearts today. We are broken without you, but I can still hear your hearty laughter and those sweet, bending notes.