In Honor of Prince

A seasoned local theater performer takes on the high priest of pop. 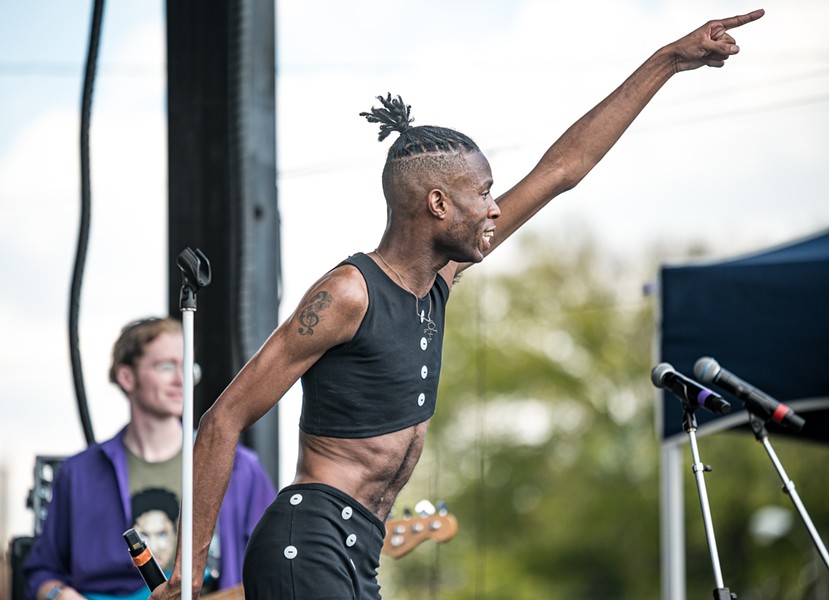 Peter McElhinney Anthony Cosby Jr. performing as Prince at the annual 2nd Street Festival. “I am just out here with a group of friends, trying to honor this man's legacy," he says.

It’s a sun-struck Indian summer afternoon in 2021 and the crowd at the 2nd Street Festival in Jackson Ward is partying like it's 1999. The end-of-the-century hit of the same name is playing on stage, the band blasting out the Prince classic with his signature balance of headlong abandon and total control. The singer prowls, poses and dances across the stage in “Parade”-era, white-buttoned, black crop-top and skintight pants. But if all the historical parts are impeccably in place, this is a performance, not a reenactment.

“Don't think I'm Prince, because I know I'm not," says Anthony Cosby Jr. “I'm not an impersonator, I am just out here with a group of friends trying to honor this man's legacy."

The tribute show, "I Would Die 4 You," was born of frustration. Cosby, a high-energy veteran of over two dozen Virginia Rep shows, including "The Color Purple," "The Wiz," and "Dream Girls," was going stir crazy without a creative outlet during the pandemic hiatus. Prince had been on his radar since he was 12 years old, suspended from school and sentenced to spend his day riding in his uncle's truck to Fayetteville, NC. "He had the '1999' cassette tape, and that's the only thing he had," Cosby recalls. "On the way there, I knew none of the words. But on the way back, it was every single one."

For a seasoned theatrical performer, it isn't just about the songs but the presentation.

"Anthony has the most incredible work ethic," says No BS! Brass vocalist Samantha Reed. "Outside of music, he is always doing two jobs at a time." His background in musical theater, where every move is blocked and polished, adds a layer of discipline to rehearsals. "He sees every performance as a complete show," adds Reed, "not just a setlist."

But it all takes teamwork, starting with Neil Perrine. The bassist, a sideman on Cosby's Sammy Davis Jr. "Love" project, welcomed the chance to play a more significant role. "[Perrine] literally put it all together," says Cosby. "He personally called every individual in the band and they all said yes without even knowing who I was or what we were actually doing."

The band features multi-instrumentalist Jackson Shurlds on guitar, DeSean Gault on drums, Stephen Roach on keyboards, and the powerhouse backing vocals of Samantha Reed and Therochelle Moore. At Perrine's insistence, there is also a horn section featuring Chet Frierson, Kaleel Moore, and Hamad Barbarji. (Cosby suggested they could do the horn parts on keyboards: "I was like, it's Prince, bro," says Perrine.)

There are a lot of strands to bind together in Prince's signature "Minneapolis Sound," including funk, new wave, soul, rock, jazz, and hip hop. "He takes elements that already exist and mashes them together into something incandescent," Perrine says. "He doesn't approach music theory or arranging straightforwardly. It is challenging to make that actually work."

The on-point costuming provided by designer Keith Walker is an essential asset. But the focal point, inevitably, is Cosby's charisma and commitment. He has plenty of both to spare.

"It makes me happy being able to provide people with a source of entertainment or some joy. It's what I was born to do,” he says. “I am not a very serious person. I'm very light-hearted. I love to make people laugh and, you know, bring out the best in them. Make them forget about all their worries and troubles for at least one second and just be present. If I can put a smile on someone's face, I feel like 'mission accomplished.'"

Effortlessness onstage requires hours of preparation -- and sometimes a bit of help from somewhere else. "When I got to the 2nd Street Festival, I thought we would have to cancel," Cosby confides. "We had our first wedding gig the night before. It ended after midnight and my voice was totally gone. There was nothing there. Then, five minutes before going on that stage, maybe the adrenaline kicked it, but it all came back."

The show soars through a sequenced arc ending with the emotional punch of "Purple Rain.”

"I cannot sing that song without crying," Cosby says. “As soon as Jackson plays that guitar intro, I start thinking about everything, remembering going to the store to pick out fabrics. All those talented musicians saying yes to the project and all the work they put in. The beautiful faces of the people in the crowd."

It all works when the waves of positive energy he's been sending out come surging back.

"It hits me all at once," he says. "Musical theater departments say ‘don't go there, ‘don't give in to emotion.’ So maybe at the Broadberry, I won't cry because I know what to expect."

But he's not giving any promises.

“I Would Die 4 U: A Musical Tribute to Prince w/DJ Olnubi” takes place at The Broadberry on Friday, Jan. 28 with doors at 7 p.m. Tickets run $15 to $125. COVID vaccination or proof of negative test result required.