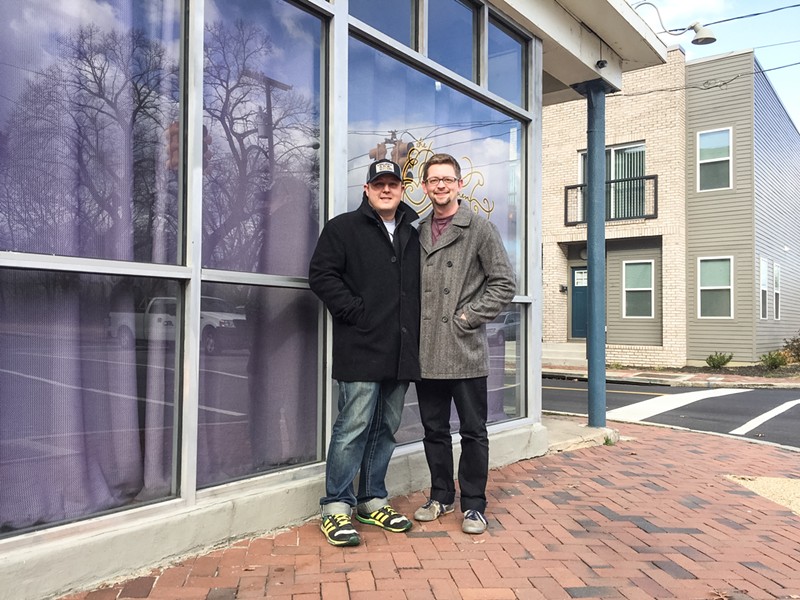 Shortly after midnight, when the transition of power is official, Stoney will pronounce Maher and Thomasson husband and husband at Maher’s Jackson Ward restaurant, the Rogue Gentleman.

“I’ve been a pretty big supporter of his for over a year now, prior to his official announcement,” Maher says. “We held one of his fundraisers at Rogue, and he started to come into the restaurant late at night for drinks and chats.”

The mayor-elect will take the oath of office at City Hall on Saturday, Dec. 31, before joining the gathering of Maher and Thomasson’s family and friends.

“He’s become like a friend, and I was really stoked he agreed to do this,” says Maher, 34. “It means more to have someone we know and trust rather than a random person.”

A second oath of office and official inauguration will occur a few weeks later for Stoney, but according to Virginia code the new mayor must be sworn in by year’s end, in preparation for the midnight transition. Dec. 31 also is the anniversary of Stoney’s father’s death. He died in 2011 at age 49.

Thomasson, 29, a baker at Idle Hands Bread Co., and Maher have been together almost five years, getting engaged in August 2015. They planned on a 2017 wedding, but moved up plans when Donald Trump was elected president.

Maher’s concerned that Supreme Court vacancies and Republican-controlled legislatures could affect marriage equality, he says: “We thought it the best course of action to have it on the record and have it official.”

But one election on Nov. 8 went well for them.

Stoney’s act as officiant stands in contrast to outgoing Mayor Dwight Jones, whose opposition to same-sex marriage rankled members of the Virginia Democratic Party, which he briefly headed. Stoney was pro-marriage equality on the campaign trail and worked for Gov. Terry McAuliffe, whose administration supported marriage equality before the Supreme Court legalized it in 2015.

Marrying his friends is a symbolic -- and actual -- statement of support for equal rights, Stoney says in a statement from his communications team: “I will vigorously support the rights of every citizen, including members of the LGBTQ community, to legally marry.”

Maher says the Rogue Gentleman will be open Saturday evening, but toward the end of the night, the wedding party will come for a late dinner. The ceremony will end shortly after midnight.

“It’ll be a standard, ‘Do you take this person?’ sort of thing,” Maher says. “We’ve been wearing our rings on our right hands and we’ll switch them. And then just drink a lot of champagne.”

And a rye old fashioned for Mayor Stoney.