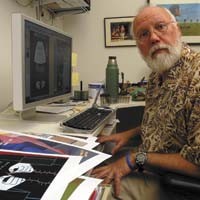 Check your monthly note from Dominion Power: Every month there's a crisply rendered, color illustration by Robert Meganck on the bill stuffer. In each issue of Virginia Living Magazine, where he's a contributing illustrator, there's a fanciful rendering of some specimen of Virginia fauna. And for the third season now, every production at Barksdale Theatre will feature his work on its programs, posters and advertisements.

If Meganck's work is ubiquitous, it's also consistently fresh and thought-provoking.

Meganck's work shows up in The Washington Post and DC's alternative weekly, City Paper. Every month his illustrations are in the Harvard Business Review. In addition to his journalistic work, he creates illustrations for scores of clients through the Richmond-based firm, Communication Design Inc. And for 30 years he's taught in the communication arts department at VCU's School of the Arts.

While the Barksdale season approaches, Meganck says he reads the scheduled plays and sketches in the margins of the script as his visual ideas emerge. "It's so boundless," he says of an illustrator's freedom to translate an idea.

Communications Arts magazine, an international publication that some consider the bible of the industry and a barometer of who's who and what's hot, just featured Meganck's work in its hard-to-crack annual illustration issue this summer.

And close to home, Richmonders who may never have contemplated illustration as high art will get the opportunity. Meganck adds curator to his resumé with "Tables to Walls," an exhibit running at Quirk Gallery through Oct. 21. The show features the work of nine noted illustrators and was co-curated with Sterling Hundley, a Richmond illustrator and teaching colleague of Meganck's.

"'Tables to Walls' stems from the fact that illustrators traditionally worked on flat surfaces and that their work is viewed through personal interaction with books or magazines," Meganck says. "This exhibit gets that work on gallery walls."