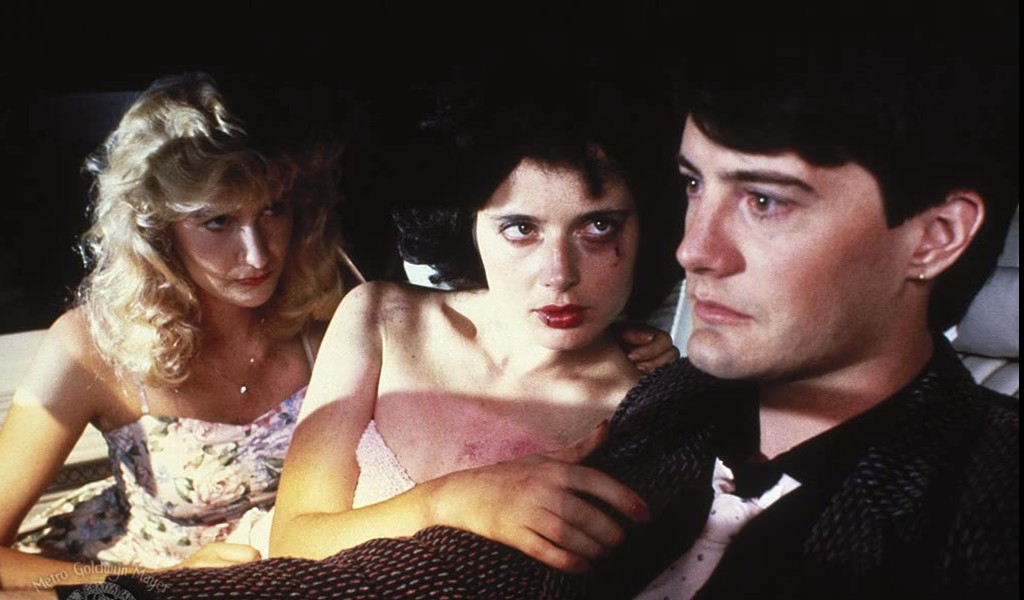 MGM Studios Laura Dern, Isabella Rossellini and Kyle MacLachlan in the 1986 film, "Blue Velvet," by director David Lynch. The movie plays at the Byrd Theatre this Sunday, Jan. 15 at 2 p.m.

Though nearing 40, David Lynch’s “Blue Velvet” remains shocking, perhaps more so now than when it was released in 1986. Forget the idea of this movie existing in 2023, in these cautious, politically perturbed, corporate monopoly-driven times. It’s amazing that “Blue Velvet” managed to come into being during any time though. It’s raw and feverish, wrested from fantasies and anxieties, and highly controlled. Watching it, you may feel as if someone understands parts of you that you wish to remain hidden—that pop art shouldn’t be allowed to access.

Lynch’s work can be so bizarre that you take it on its own terms, especially now that he’s a surrealist institution. You can accept him and steel yourself against the emotional impact of his aesthetic, especially in mannered films like “Wild at Heart.” You can groove to the sex, violence, and abstract imagery, intellectualizing every element as a variable in a scheme. Alan Moore had a point when he said of the third season of Lynch and Mark Frost’s “Twin Peaks:” “If everything’s weird, nothing is.”

“Blue Velvet” and “Mulholland Drive” manage an ideal balance of commercialism and idiosyncrasy: They are just rational enough to underscore the perversity of Lynch’s deviations from expectation. These films are organized around a straightforward contrast—between the sanitized wish fulfillment of pop culture and the unholiness of human desire—and from there, spin off into netherworlds of neuroses.

As shot by the great cinematographer Frederick Elmes, “Blue Velvet” resembles a Technicolor melodrama of the 1950s, while the plot suggests a noir. The colors are ripe and yummy and nostalgic and implicitly sexual, especially the red and blue hues that visually define many key scenes. At first, the characters speak in the stiff, fake homilies of vintage melodrama, for which Lynch has always had an uncanny ear. This dialogue in particular has misled people, most famously Roger Ebert, into thinking that “Blue Velvet” is a cheap pastiche.

A more modern and macabre sensibility gradually seeps into the film. The world of this film is a dream powered by social evils that we often try to ignore. The fallibility and corruptibility of this seemingly PG-rated, suburban paradise are signaled by Lynch’s oblique linking of the town police with a drug ring run by a psychopath who, in the film’s great irony, longs for innocence as much as the dewy-eyed teenage protagonist.

Critics have made a lot of hay over Lynch’s symbolic uses of blond and brunette women as harbingers of the light and night, of our respective innocent and lurid impulses. That duality is in play in “Blue Velvet:” Sandy (Laura Dern) is an earnest, virginal high school girl who appeals to a young man’s desire to remain a child, while Dorothy (Isabella Rossellini) is a sensual, damaged lounge singer who appeals to one’s yearnings to spend privileged time with a dangerous, “experienced” woman.

This isn’t the key duality of “Blue Velvet” though. The contrast between Jeffrey (Kyle MacLachlan) and Frank Booth (Dennis Hopper) is more disturbing. This relationship serves the same function as the contrast between Sandy and Dorothy, illustrating dueling yearnings for safety and carnality, but goes much farther in terms of implicating the audience as well as Lynch himself.

How easy is it to offer up an innocent young man, eager to sully himself, who learns of the dangers of the real world? On this level, Jeffrey is a deliberate and necessary cliché—an entryway into darker terrain. However, it is far more original to reveal that Frank, the leader of a drug ring, is a rapist and kidnapper who commits atrocities out of a crippling sense of arrested adolescence. We’re on Jeffrey’s wavelength when he sneaks into Dorothy’s apartment to solve the film’s inciting mystery—pertaining to a severed ear—even though what he’s doing is creepy and invasive. We’re on his wavelength because we want to know more, and because Dorothy, a voluptuous siren with lush lips that appear to be in 3D, calls to us.

But Frank suggests what happens when these self-absorbed, essentially sex-driven impulses become entirely unhinged. Like Jeffrey, Frank treats Dorothy as a means toward realizing his fantasies. Actually, that’s putting it too politely. Frank’s despicable treatment of Dorothy is driven by a need to worship as well as degrade her; sometimes he calls her “mommy,” but more often refers to her by unprintable insults. Jeffrey wants to enter the adult world by screwing Dorothy, while Frank longs to return to childhood, enthralled with blue velvet and a mommy fantasy that involves, well, screwing Dorothy.

This is kinky stuff, as if porn has somehow intruded upon a 1950s-style coming-of-age melodrama. One of Lynch’s symbols is particularly audacious: When Frank rapes Dorothy in the middle of a role-play, which Jeffrey witnesses while hiding in her apartment, he places the sash of her blue velvet rope in his mouth, sucking on it, and eventually forces it into her mouth. This suggests the umbilical connection of mommy and child, and Frank alternately calls himself “daddy” and “baby,” as if he wants to play both roles simultaneously. Lynch stages this scene as both a horrible act of abuse as well as a turn-on. The director's willingness to show the intoxication and the cost of his fantasies simultaneously is one of his governing traits as an artist, and the Jeffrey/Frank dynamic embodies it. It’s as if we’re seeing “before” and “after” stages in the sexual education of a potential madman. Or artist.

For critics, the danger with Lynch resides in discussing his themes and symbols in a manner that fails to do justice to the wildness of the work. To cloak Lynch in the sanitizing impersonality of academia is a cop-out. “Blue Velvet” still feels profoundly dangerous for willing to risk ludicrousness and offensiveness in order to show how things can repulse and arouse us at once. Jeffrey discovers an affinity for rough sex that links him further to Frank, and he’s appalled and emboldened. Trying to take control of an unimaginable situation, Dorothy begs Jeffrey for the abuse that Frank has just dealt her. One could imagine how directors might tackle this material now, if they had the nerve at all: the sex and violence might be seamy, docudramatic, aggressively literal and easy to write off. Lynch spins sex and violence into lush fantasies, into the manna of the stuff that old noirs and melodramas suggested but could never show. We feel as if someone is taking us to the heart of the erotic hunger that has driven cinema.

It would be comforting to write off the sexual triangle of Jeffrey, Dorothy, and Frank as self-consciously outré, except that Lynch and the actors keep grounding it in real and intimate gestures. When Dorothy catches Jeffrey hiding in her closet, she orders him to strip at knifepoint. Pulling his boxers down, she kisses around his groin, resting one of her hands somewhere between his hip and his butt. I have never forgotten that gesture, which captures in a second the thrill and fear of being seen and touched by a lover for the first time, especially if you’re young and horny and desperate to be defiled. It is an unaccountably human moment, existing within an episode that is a nightmare and a wet dream. Lynch’s ability to bridge style with emotion reaches its apotheosis in those canted close-ups of Dorothy’s face, especially those lips, as she swoons in despair, fear, lunacy, and ecstasy. At times, “Blue Velvet” stops in its very tracks to give voice to this ecstasy, this longing for past innocence, especially in the legendary scene when Dean Stockwell, as one of Frank’s gangster cronies, lip synchs Roy Orbison’s “In Dreams.”

The ending of “Blue Velvet” suggests a return to order, which Lynch knows to be disappointing and false. Once you’ve seen the bugs under the surface of the green lawn, so to speak, you can’t un-see them. Later Lynch films would discard this Oz-ian notion of going home again altogether. In “Lost Highway” and “Mulholland Drive,” and especially “Inland Empire,” Lynch takes us to a wild realm, past the precipice of ungovernable desire and madness, and leaves us there in the emotional wilderness, untethered. But the link “Blue Velvet” has to normalcy makes the film unshakable, suggesting how quickly we can step off the reassuring sidewalk into deranged and uncanny places, and how close those places have always been and always will be.

“Blue Velvet” is playing at the Byrd Theatre this Sunday, Jan. 15 at 2 p.m. Tickets are $8. Maybe not be the best movie for a first date.