Nothing to worry about, Danish punkers Iceage are just nihilists. 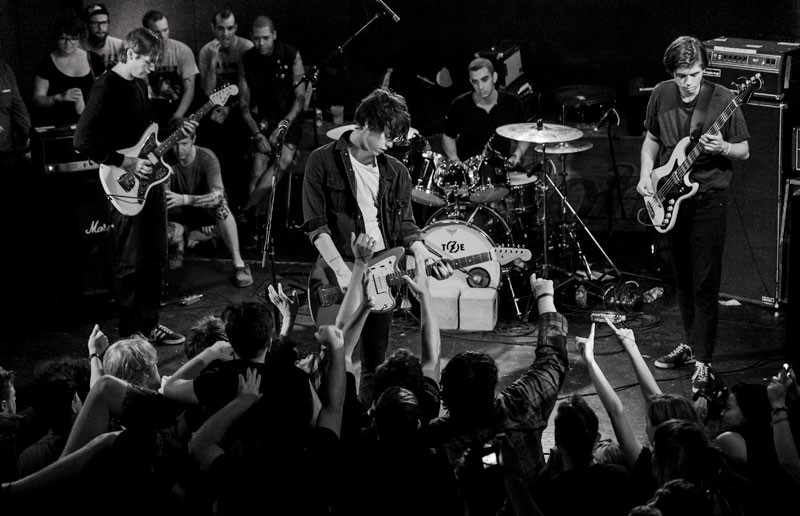 The dark Copenhagen post-punk outfit has had to answer that question from media a lot lately. The young band, known for its bloody, lip-busting shows, has a reputation for thwarting journalists, and for their fascination with controversial imagery — certain tattoos, Ku Klux Klanlike hoods in their videos and a preference for the Nazi band Absurd — that has made more than a few folks uncomfortable.

A decision to sell branded knives on tour didn't help.

Perhaps it was just a series of poor judgment calls by abrasive teenagers eager to provoke or a publicity machine spinning up fuss for the sake of headlines. But fortunately for them, the focus has returned to Iceage's ever-evolving sound with the release of its acclaimed sophomore album, "You're Nothing," and an upcoming tour which includes a return stop in Richmond at Strange Matter.

The band burst onto the scene in 2011, garnering more kudos with their gnashing debut album, "New Brigade," than most bands accrue years into the game. But according to Wieth, the band never worried about whether it would skirt perilous territory with its follow-up release. "We didn't really talk about it, it just kind of happened," he says.

Pitchfork and Iggy Pop-approved, "You're Nothing" is a full-throttle, audible uppercut of an album as unrelenting in a brief 30 minutes as its predecessor, though clearly more honed from experience. The structure is tighter and the spewed words pack meaning in addition to the expected punch. For an album by musicians who are barely old enough to drink, it holds up in the company of established Matador label mates such as Fucked Up and veterans Sonic Youth.

"The only expectations we had to deal with were our own," Wieth says about the group's critically acclaimed sophomore album. "That wasn't hard."

Influenced by Georges Bataille's "Story of the Eye," a collection of sexually charged vignettes, frontman Elias Bender Rønnenfelt's lyrics are downright unnerving this go around ("that's right, you're nothing/feel the void grow") as the band toys with slower, sludgy sounds on a few tracks that seem to stalk the listener. Wieth chalks it up to harnessing the experience of the past few years. "Of course you change. You get older. We grew individually and collectively," Wieth says. "We've also stayed very good friends throughout recording it. We greeted each other with a smile every day."

The idea of a darling bro-mance seems a bit too much like sparkling rainbows for this nihilistic group, but the soft-spoken Dane sounds genuine. It's fair to be skeptical though.

"Whatever happens happens, you know?" Wieth says about pushing the boundaries of their searing, signature sound. The guitarist is open to ideas. "I like country music," he says with a laugh. "I don't know if I'd be any good singing it, but I'd be willing to try." S