In Bob They Trust

God-fearing women, many with ties to Regent University, descend on Richmond to usher in the McDonnell era. 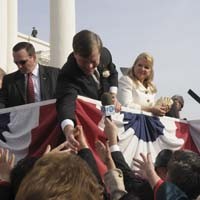 Newly christened Gov. Bob McDonnell has a true believer in Judi Vankevich. Statuesque and bubbly, a former model with a short blonde bob, constant smile and an almost-frantic enthusiasm for whatever she's talking about, Vankevich flew from her home in Vancouver, Canada, to attend the inaugural events this weekend.

Her loyalty is born of school days: Vankevich was at CBN University, now called Regent University, when McDonnell was a graduate student in government and law there in the late 1980s, and she's counted herself a friend of the McDonnell family ever since.

The inauguration weekend doubled as a sort of power reunion for graduates of Regent, the Pat Robertson-founded Christian university in Virginia Beach. Jane Eshagpoor, a Regent graduate and a coordinator for McDonnell's inaugural committee, estimates that there were between 80 and 100 former students of Regent at a Saturday reception for alumni of schools McDonnell attended.

Vankevich was one of them, and at the First Lady's Luncheon at the Omni Richmond Hotel on Sunday, she hugs and hobnobs, taking this reporter under her wing, introducing her to other women graduates of Regent and sharing her convictions with a smile.

Vankevich runs a business traveling around the United States and Canada performing as her alter-ego character, “Judi the Manners Lady,” and has a CD out called “It's Fun To Have Good Manners!” She says she subscribes to a “common sense” model of government based on the Ten Commandments and the golden rule.

For Vankevich and her friend Lea Carawan, another contemporary of McDonnell's who graduated from Regent with a master's degree in biblical studies, the inauguration weekend was a chance for their teenage daughters — Lexi Vankevich and Rachel Carawan — to watch the political process in action. “I really just feel blessed to be here,” says Rachel Carawan, a former missionary, as the luncheon winds down and the women pose for photos.

But what do the women graduates of Regent have to say about McDonnell's controversial graduate thesis, a manifesto that mourned the rise of working women and the decline of Judeo-Christian family values?

Neither Judi Vankevich nor Lea Carawan has read the thesis, and neither is particularly concerned about it. “I just know he's a man of integrity,” Vankevich concludes when asked about the thesis.

As for Lea Carawan, she says she “was not the least bit offended” by the controversy. “I am anti-today's culture,” says Carawan, a Virginia Beach resident who's executive director of a Chesapeake-based group called the Congressional Prayer Caucus Foundation. Carawan also runs a ministry called Transformed Living, a Judeo-Christian organization that teaches women how to live by “the principles of godly womanhood that the Bible teaches them.”

For Carawan, a woman's priorities should be God, husband and children —  in that order. A career can come too, Carawan says, but balancing it all is about “seasons and timing.” In other words, a woman can experience everything, but not all at once.

Vankevich agrees. “We as women can do anything we want,” she says. “Look at Maureen [McDonnell] — she's had her season.”

By Sunday afternoon, the Vankevich and Carawan clan are in line for the tour of the Executive Mansion following the First Lady's Luncheon. When this reporter leaves the group, there are several rounds of hugs. Judi Vankevich asks the other three to huddle around for a farewell prayer.

“Lord just bless our new friend Sara,” Vankevich says. She goes on to bless this article, all the articles by this reporter that will follow, along with her journalism career and future family, and “the power of the pen to make a difference.”