Local band Positive No finds its voice out of near tragedy. 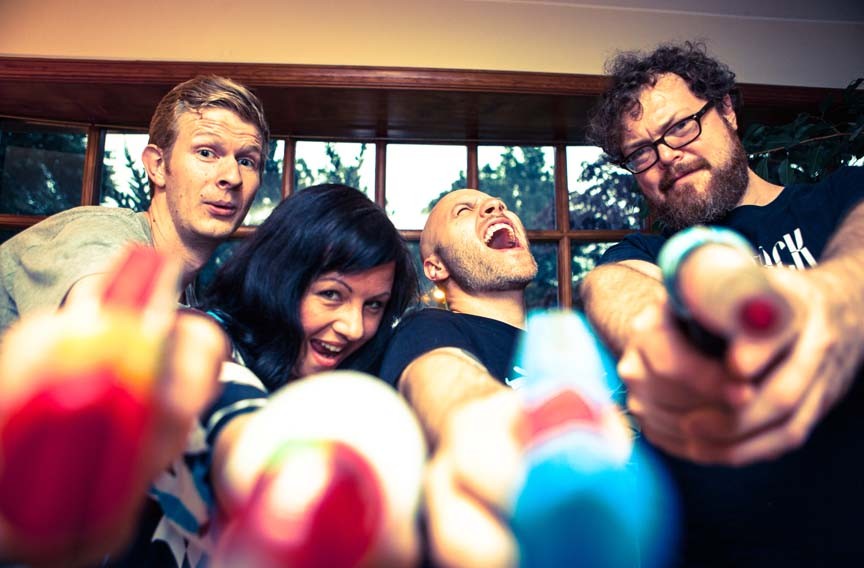 Ed. note: This show is Friday, Nov. 8th, not Nov. 9th as listed in print edition.

The members of Positive No form a creative juggernaut, from their meticulously crafted 3-D show posters to an engaging blog with posts about such wide-ranging topics as song craft and their cats.

"We don't want to do anything without it being special," vocalist Tracy Wilson says. "Not necessarily for everyone, but things that make us excited and happy."

It's paid off as of late with major buzz coming out of such notable music sites as Rolling Stone and Stereogum, which have been praising tracks well before the release of the band's debut EP, "Via Florum."

While the attention is flattering, it isn't what matters most to the four piece. "It's hard to feel like any of that resonates," Wilson says. "Those are big names, of course. But it comes and goes so quickly." She says it was more meaningful to have an acquaintance tell her recently that they couldn't walk through Scuffletown without hearing the group's song, "Pocket Park."

Taking its name from an etching over a stone archway in Maymont Park, "Via Florum" is a record that couldn't have been created anywhere but Richmond. Notable landmarks are present throughout and five songs rhythmically rise and fall like the James with intermittent power-pop flourishes. It's a dreamy affair with just enough scruff to be marked RVA. There's an undeniable sense of home and community.

"I've fallen in love with Richmond over the past decade," says Wilson, a native New Yorker. "Sometimes when you move to a new city, you don't feel welcomed or just hate it. You have to discover it and make it your own. These songs are that adventure."

But the band didn't start so smoothly. What began with guitarist and songwriter Kenneth Close writing a handful of songs and coaxing Wilson to lay down vocals in the couple's living room nearly was derailed by tragedy. Just as they were finishing up their first song, Wilson was hit by a car in the Fan and suffered a brain injury.

"Everything was just put on pause," Close says. Wilson was out of work, and Close, a senior account executive at the Martin Agency, had an extended vacation that allowed the pair to work on material. "It was a slow build, but all of a sudden there were songs and we put them up on Bandcamp," Wilson says. "We had a demo."

Songs shared with friends led to the recruitment of drummer Willis Thompson — who'd just finished playing with Thao and the Get Down Stay Down eight months earlier — and landing current bassist, Josh Quarles. As the band practiced, Wilson says genuine chemistry emerged. "It's like realizing you are in a relationship and it's healthy and stimulating in all the right ways," Wilson says. "We knew that that this was something that could grow and be a long-term thing pretty quickly."

Despite a feverish desire to make more music and play shows, the residual effects of Wilson's accident loomed. "We were as patient as we needed to be, but we pushed forward because we wanted to be good," Close says. The singer's diaphragm was sore, which made regulating air while she sang entirely different, and a concussion caused her to take in sound on a much softer level. The obstacles ultimately shaped Positive No's delicate but mighty sound and pushed Wilson to explore a vocal style far from her days in the post-hardcore powerhouse, Dahlia Seed.

"You can be powerful and not blow out your voice," Wilson says. "Twenty years ago, powerful meant screaming. There's an alternative. Who knew?" She laughs.

Also, practicing with the band helped with Wilson's physical and mental recovery. "Having a positive goal that had nothing to do with walking up the stairs again and exhausting physical therapy goals was important," she says.

Collectively, the group took a big step and played a few shows and recorded at Magpie Cage with J. Robbins in Baltimore.

"This is the first statement of our band, but I think we've already progressed past it," Willis Thompson says. Postive No is looking to play a few out-of-town shows to recoup funds spend on the EP and then get to work on a full length. "The pressure is over," Close says, "so we are ready to grow it in an exciting way." S