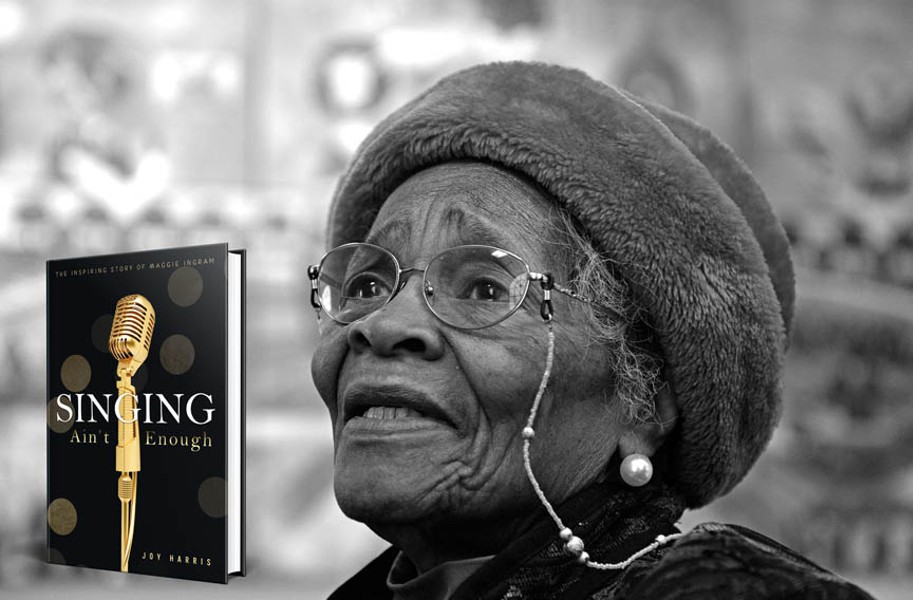 For many Richmonders, the image that comes to mind when you say the name Maggie Ingram is a striking, silver-crowned woman dressed in purple or green — or maybe a floral print — flanked by younger women on stage. The powerful voices are in perfect harmony, praising God through song.

But this is just part of the story. Joy Harris, one of Ingram's granddaughters, writes in a new biography, "Singing Ain't Enough," about her grandmother's courage in starting her singing career in Miami and, in the 1950s, leaving an unhappy marriage and moving to Richmond with her five children. They would become the Ingramettes, the beloved and groundbreaking gospel singing group that still performs more than 50 years later.

"It's a documenting of her life, and I'm the lens," says Harris, who started interviewing Ingram a decade ago, before dementia began to claim her memories. "I think for her, it was like storytelling for her granddaughter."

Some of the stories are exciting, like the family's car sliding off a mountainside, saved from crashing by a tree stump catching the rear axle, or Ingram's surgery to remove a tumor from her intestine, which ended — miraculously — with a severed piece of the intestine growing back in the surgeon's hand. This sounds like the sort of apocryphal detail that may or may not be true, but Harris confirmed the story through medical records. Other parts of the book were authenticated by people she interviewed.

"It makes the story more remarkable," says Harris, who combines public speaking, writing and marriage workshops under her lifestyle brand, Alltrepreneur. "I didn't even put everything in the book."

Ingram, who died in 2015 at 84, founded the Ingramettes in 1961 with her children, after she heard them singing the Caravans' "I'm Ready to Serve the Lord" in perfect four-part harmony, as Harris recounts in her book. Soon, they had a first gig at Hood Temple AME Zion Church on West Clay Street.

"Everyone was astonished by the richness of the children's voices, especially Almeta's, given that she was only 10 years old," Harris writes. In the congregation was Joe Williams, a member of the famous gospel group the Harmonizing Four, and he invited the Ingramettes to perform at his group's anniversary concert at the Mosque a few nights later.

Although the lineup changed through the decades, with Ingram's sons becoming backup musicians, the group wrote, performed and recorded songs, traveling to New York, Nashville and other cities up and down the East Coast. James Brown even asked the Ingramettes to sing backup for his Christmas album, but Ingram steadfastly said no to secular music.

"For her, it was not an option," Harris says. Although Ingram was very independent and "didn't try to clone herself after anybody," she looked up to Mahalia Jackson, who also remained dedicated to gospel.

Encountering misogyny in the male-dominated gospel world, Ingram started her own record label and recorded music independently. She also made ends meet by working as a housekeeper and cook for civil rights lawyer Oliver Hill Sr. — meeting Martin Luther King Jr. along the way — and as a driver for the city of Richmond's Department of Social Services. Later, Ingram started a day-care service at her home, all while traveling to regional performances on the Ingramettes' tour bus, nicknamed Precious.

"Growing up, I saw my grandmother every weekend," Harris says, recalling long weekend road trips during her childhood in the late '80s and early '90s. "My grandmother is the greatest storyteller of all time. She always had a story or a scenario during the ride."

Harris' mother, Tina, sang with the Ingramettes through her middle teens, and her aunt Almeta and sister Cheryl continue to perform with the group. Harris herself has never sung with the group, but she has played the drums, learned from her uncle, Tom.

During the past decade, even more Richmonders learned to appreciate Ingramettes at the Richmond Folk Festival, where they appear annually on the festival's final Sunday. As Ingram's dementia progressed, she still sang.

"Even in the last years of her life, she remembered all the lyrics," Harris says. "[The dementia] was hard to detect, even for family members. What was amazing about her was that she was healthy enough to do a whole set." S

Joy Harris has appearances at Redeem Church of God in Christ on May 21, Victorious Living Christian Center in Henrico on May 27, and Fountain Bookstore on June 11. Visit facebook.com/thejoyharris for information. "Singing Ain't Enough" is available on Amazon and at Bbgb and the Virginia Museum of Fine Arts gift shop.